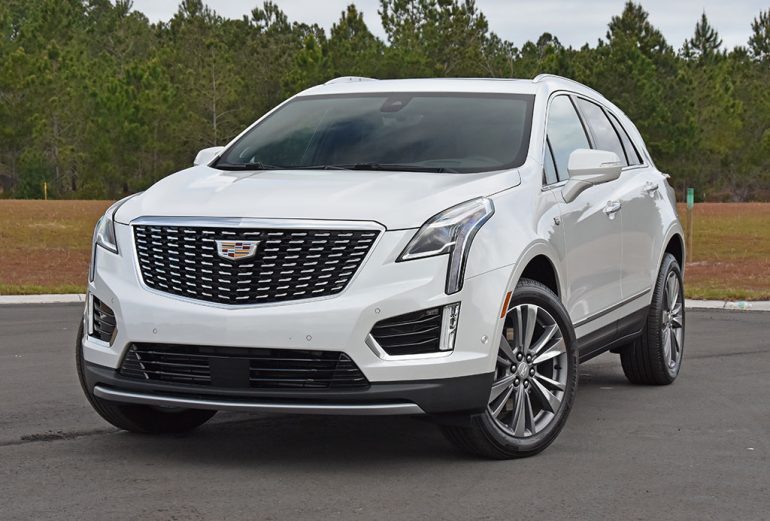 When it comes to mainstream luxury, Cadillac has things nailed down. However, in respect to what mainstream luxury is defined as, Cadillac’s lineup of vehicles hasn’t broken out of such a mold and continues on the same proverbial path with vehicles like the 2020 XT5.

>> Get the best price on the Cadillac XT5 from a network of local dealers now. <<

For the 2020 model year, the Cadillac XT5 gets a new engine choice, the proven 2.0-liter turbocharged 4-cylinder. Such a choice to equip the XT5 gives buyers another option, an opportunity to be a bit more efficient without sacrificing a great deal of performance. However, in my week spent with the new XT5 Premium Luxury FWD 2.0-Turbo test vehicle, I can easily recommend such a setup in place of the still-available 3.6-liter V6 option if you don’t mind spending just about the same as a comparably equipped V6 model. 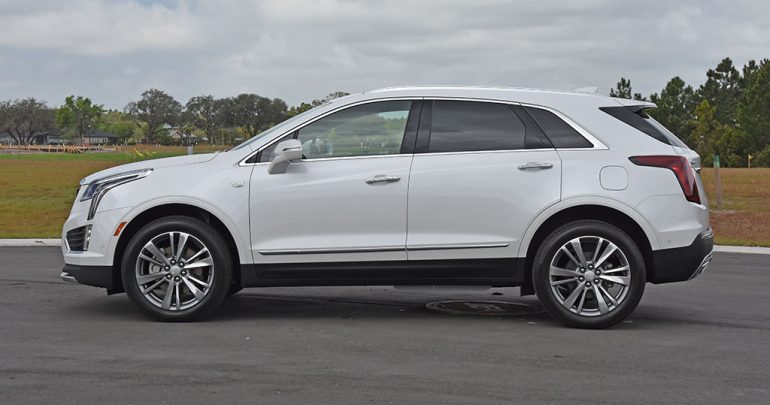 Cadillac is making strides to gain more notoriety on the way to a better luxury brand recognition, especially with vehicles like the newly introduced 2021 Escalade. In seeing the vast equipment list on the new Escalade, it’s refreshing to see many collective parts of the XT4 and XT5 crossovers to make their way into the flagship SUV. Such a move says a lot about what the XT5 has to offer, which is a respected cabin space with comfy heated and ventilated seats on my loaded-up XT5 Premium Luxury test vehicle and a surprising amount of space out back and the cargo area. 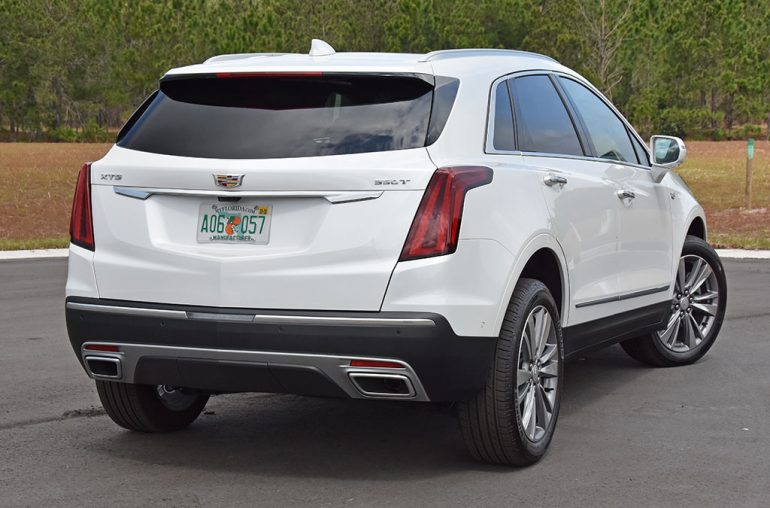 Performance from the new turbo 4-cylinder is mostly consistent without much turbo lag and a willingness to get the job done without feeling unsafe or inadequate when you need to overtake vehicles on the highway. I will say, the turbo 4-cylinder doesn’t inspire the additional confidence that you get with the 3.6-liter V6, which has 73 more horsepower and but only 13 lb-ft of torque over the turbo-4’s 237 horsepower and 258 lb-ft of torque. Most buyers of the XT5 will ask about the 4-cylinder engine choice and make their decision when they take a long test drive, otherwise, the numbers game may be a bit deceptive. Overall, the driving traits remain mostly the same with both engines, partly due to the 4-cylinder turbo engine having less weight to tote around versus the V6 model. Additionally, the fuel efficiency of the 4-cylinder turbo FWD at 21 mpg city, 28 mpg highway, and 24 mpg combined beats the V6 FWD model’s figures of 18 mpg city, 26 mpg highway, and 21 mpg combined. 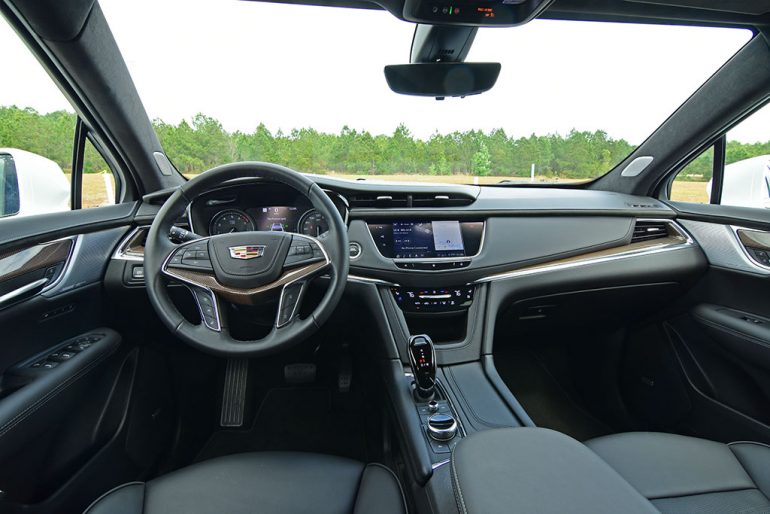 Both engines get mated to a 9-speed automatic transmission that is somewhat soft in its shifting but not to the point of being out-right lazy. The transmission does well to find the right gear, most times. Use of the 9th gear is sometimes a mixed bag situation with the 4-cylinder turbo engine where it doesn’t know if it wants to keep the selected gear or downshift often to keep pace on the highway.

The interior of the Cadillac XT5 retains somewhat of a monotone theme apart from my test vehicle having color-infused carbon fiber trim. You can select from a decently sized list of color options, inside and outside, making the XT5 more of a personalized vehicle. Surprisingly, just like the smaller XT4 crossover, the XT5 has a good amount of interior space, more than its outward appearance suggests. The front heated and ventilated seats are comfortable while the rear seats have just enough room for a couple of adults in the outboard heated seats and one ‘smaller’ person for the middle seat. 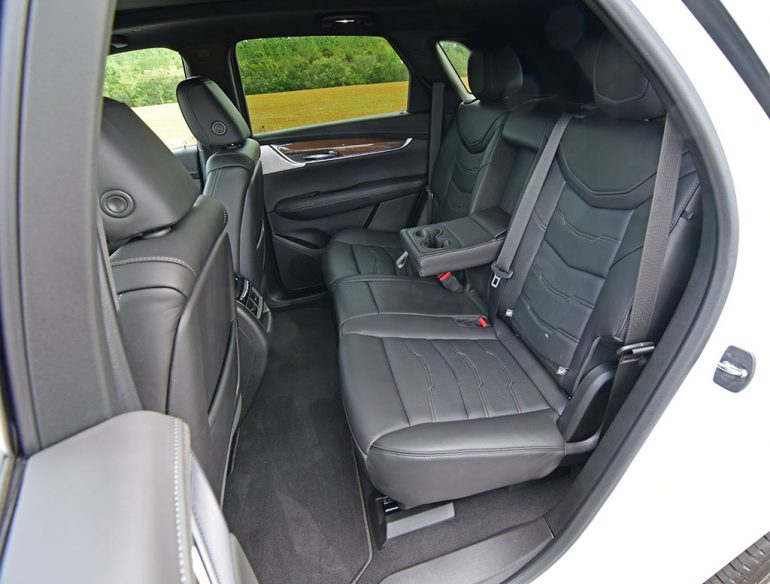 The simplistic approach of the dashboard controls with a redundancy from the touch screen that can be mimicked through a central control knob and physical buttons, which all surround a physical volume knob right behind the gear shifter. 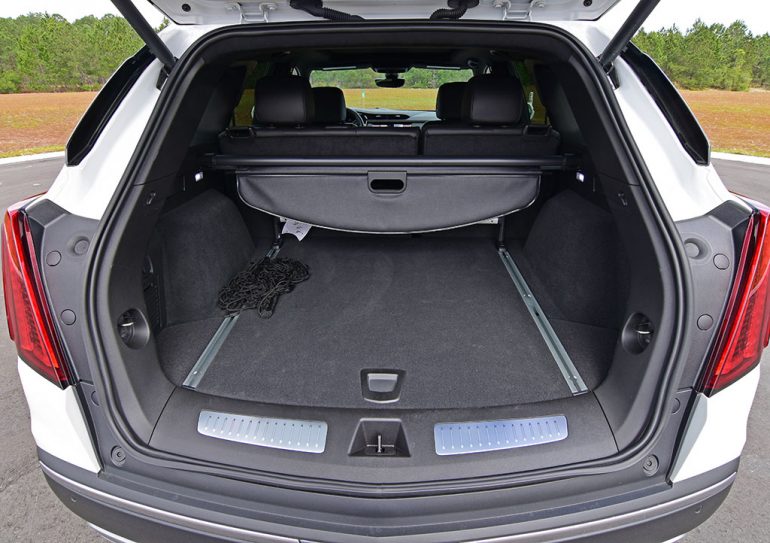 There’s a bevy of safety features and use of smart tech through the XT5’s adaptive cruise control, lane keep assist, blind spot monitor, Apple CarPlay and Android Auto integration, and its improved 360-degree camera system. To keep with the tradition of luxury, the XT5 rides smooth, and its real-time dampening suspension keeps things from getting sloppy over most road conditions. 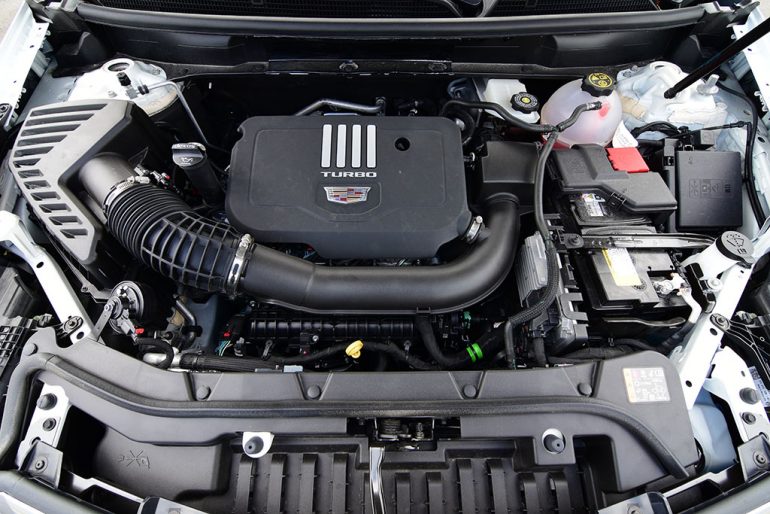 Overall, the new XT5 and use of the 4-cylinder turbo engine is a nice way of expanding upon a good thing. The XT5 was already a popular choice for a midsized two-row luxury crossover with the respected V6 engine, and having another engine choice is a step in the right direction. My only qualm remains that the 4-cylinder engine option costs about the same as a comparably equipped V6 XT6 in the same trim level. It comes down to if you want the slight fuel efficiency advantage or the more robust power from the V6 at the expense of a little extra gas. My nearly loaded XT5 Premium Luxury FWD 350T (2.0 Turbo) test vehicle comes to a price of $63,715, which includes a $995 destination charge.