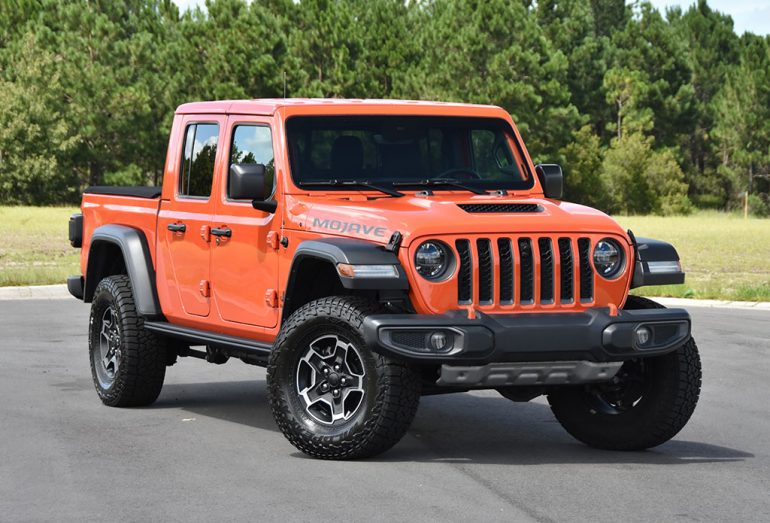 When it comes to a go-anywhere vehicle that’s completely unapologetic, Jeep has risen to the occasion without fail for around 75 years. To bring something fresh to the forefront to add to the Jeep Wrangler’s unique appeal and off-roading demeanor, Jeep brings us the all-new Gladiator, essentially a pickup truck form of the Wrangler.

The new Jeep Gladiator has garnered the expected attention from its unique looks to bring a formula that’s worked well with an enthusiast base the takes pride in their ownership of what most claim as the most capable off-roading legal vehicle that you can buy from a major automaker. In my time with the new Jeep Gladiator in its top-level Mojave trim, I am well pleased with the added versatility to something that was already considered quite resourceful in all that you can do with such a vehicle. 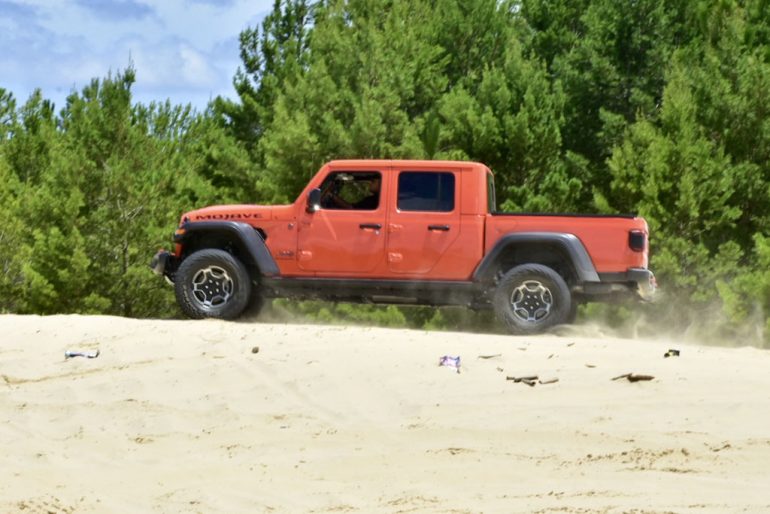 The new 2020 Jeep Gladiator is a new entrant in the Jeep lineup but it not only takes what’s liked about pickup trucks and put a pretty Jeep Wrangler face on it, they took the raw ruggedness known in the Wrangler and a few bits, such as suspension control arms, out of the proven RAM truck to formulate the Gladiator. What I experienced in the Gladiator is a well-thought-out creation that retains much of the Wrangler’s characteristics down from its wondering, slow, and sloppy steering to its ability to claw serious off-roading terrain. 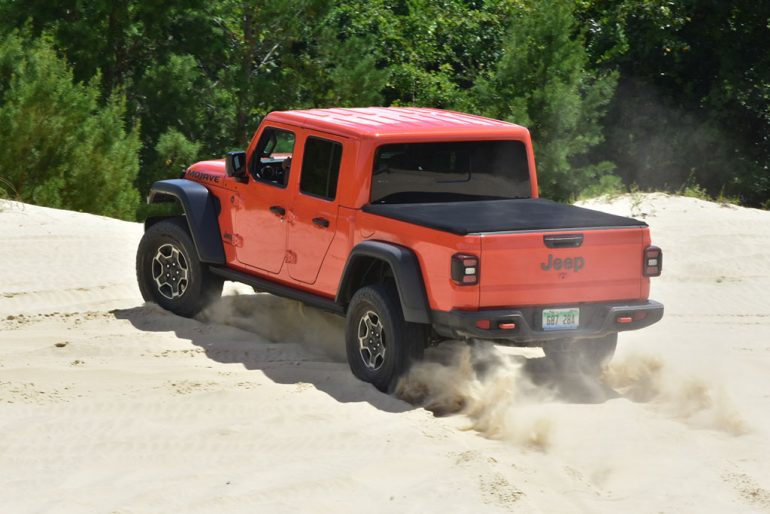 Powered by the familiar 3.6-liter V6 engine with 285 horsepower and 260 lb-ft of torque, the Gladiator keeps a decent pace and proves to be willing to conquer just about anything you can throw at it – partly thanks to its manual transfer case that uses an aggressive low-range gearing to navigate seriously challenging terrain up to 50 mph. For the normal gearing duties in 2-high and 4-high on the transfer case is the brand’s proven 8-speed automatic transmission found in my test vehicle. Surprisingly, you can get a standard 6-speed manual transmission in the new Jeep Gladiator, similar to what is offered in the Wrangler sibling. Fun should ensue with the manual, but I was happy to take advantage of the smart-logic in the 8-speed automatic, that cleverly retain certain low gears when you traveled rough terrain and selected the Off-Road-Plus mode, which is quite intuitive. The forward-thinking of the off-road mode, which is only available in 4-high or 4-low, does interesting things to the drivetrain to keep the Gladiator crawling or at least moving in the right direction without the worry of getting stuck. Speaking of getting stuck – it’s a non-issue as I took the Gladiator Mojave to some serious sandy areas climbing hills and dissenting on them with an ear-to-ear smile on my face. 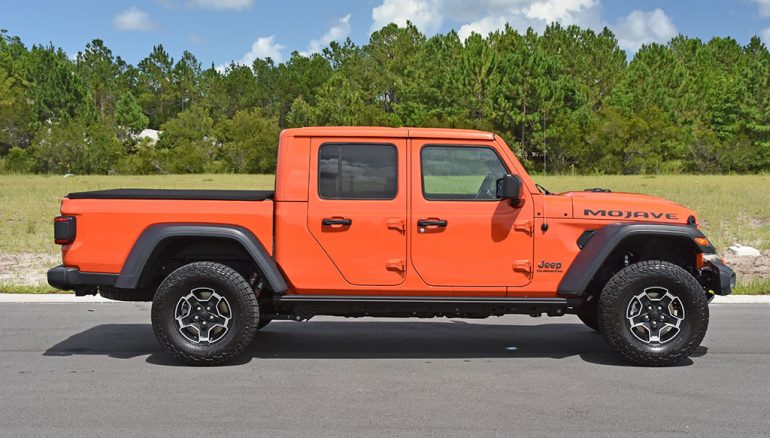 The only concern in the new Gladiator over its Wrangler siblings is the longer wheelbase that you must be mindful of when cresting steep hills. Otherwise, the Desert Rating of my Gladiator Mojave was right at home on deep sandy hills as its 33-inch knobby all-terrain tires wrapping 17-inch wheels grappled at the sand and helped the big 5,100-pound-plus Gladiator move about with ease. 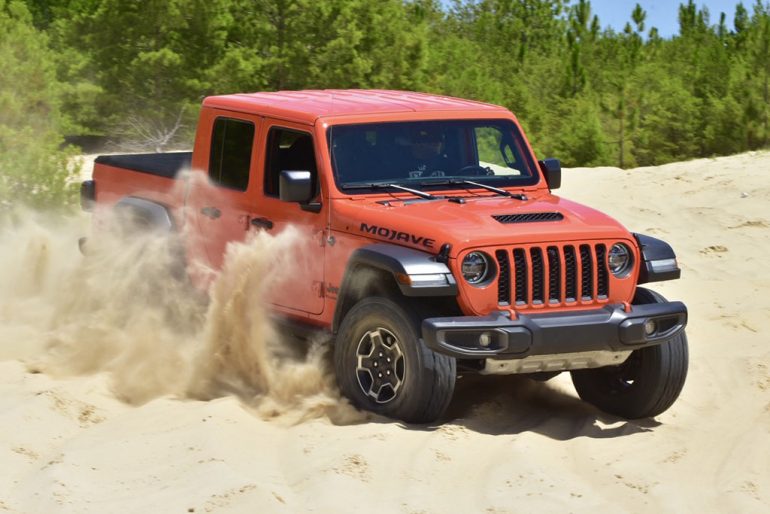 In a nutshell, the new Gladiator feels more at home on sandy terrain than it does on smoothly paved roads. However, on the road, the Gladiator Mojave was still enjoyable as it permitted a smooth ride quality thanks to the Fox Shocks and then transitioned into a well-endowed off-roader thanks to the Fox Shocks’ added reservoirs allowing me to get up to a good speed going over hard compacted sand rises – the Gladiator landed smoothly even hitting its bump-stops with grace. Yes, I did get a chance to really push the Gladiator to what I think was near its suspension travel limit in jumping a few sandy hills. 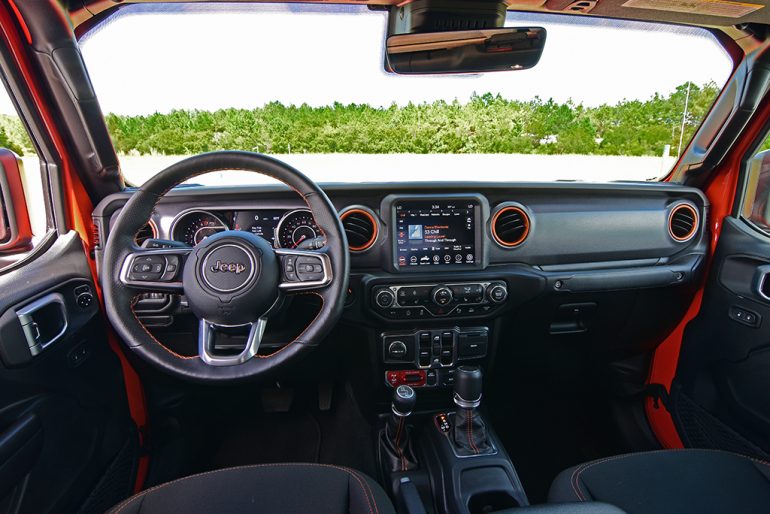 To think that all the fun I had with the Gladiator on sandy trails that I could also enjoy the outdoor elements with the tops easily removed, the doors removed, and with up to 1,200 pounds hauled in its unique truck 5-foot bed that hauls up to 4×8-foot sheets of plywood, the only bed available for the Gladiator. With all of its doors and roof panels in place, the cabin is somewhat quieter than any other Wrangler that I’ve driven, much in part thanks to the insulated roof panels. 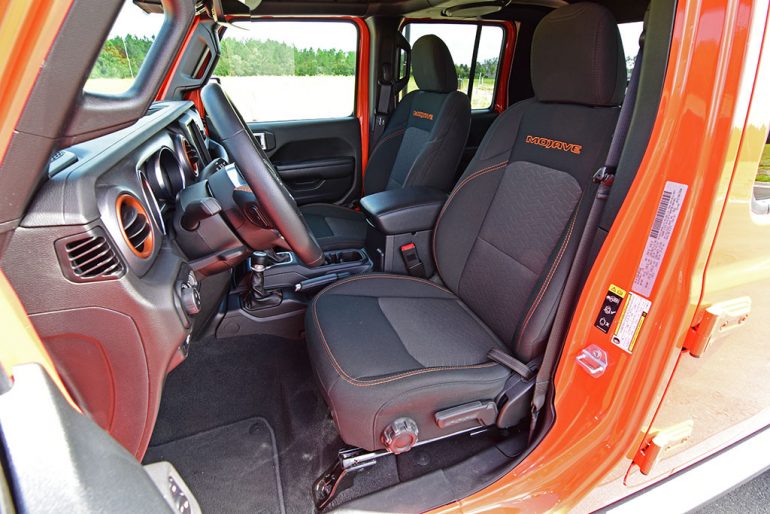 Jeep didn’t leave any stones unturned in the design of the Gladiator. The cabin is the best it’s ever been for its kind if you seek out previous iterations of the Wrangler, which is accented by the well-praised 8.4-inch infotainment touchscreen system from the brand. My major complaints from inside the Gladiator remain to be the interior is still a bit short on space for those with long legs, the unpredictable steering, and the lack of a full 360-degree camera system making do with just the wide front and rear cameras that can be pulled up at any time. 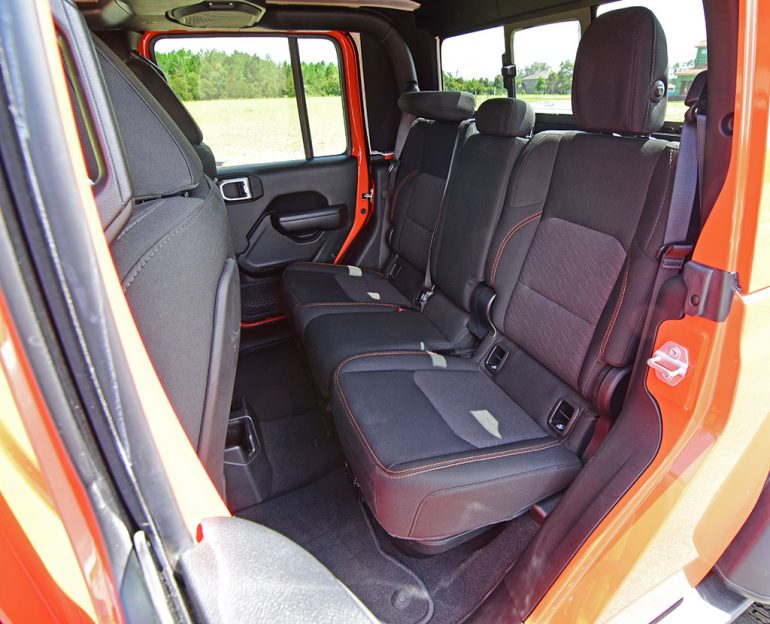 Also, on-road performance almost forces you to drive like a stand-up law-abiding citizen as you wave to other Jeep Wrangler owners. What I mean by such, is the Gladiator, just like the Wrangler, is an easy-going vehicle that has good power but doesn’t inspire any sportiness. Zero to 60 mph takes about 7.6 seconds, and lateral handling is – well, NO. Don’t ever push the Jeep Gladiator hard in the turns or expect to win any races unless they are off the beaten path. Again, the Gladiator is more suited for off-roading even though you could use it as a pickup truck replacement. In all, the Gladiator is the do-it-all vehicle for those who look for something to commute to work, enjoy the outdoor elements like no other vehicle on the road, or enjoy the sporting aspect of off-roading just about anywhere there is a bit of landmass to plant its four wheels. Oh, you have that truck bed to haul your gear as well – or tow up to around 7,650 pounds. 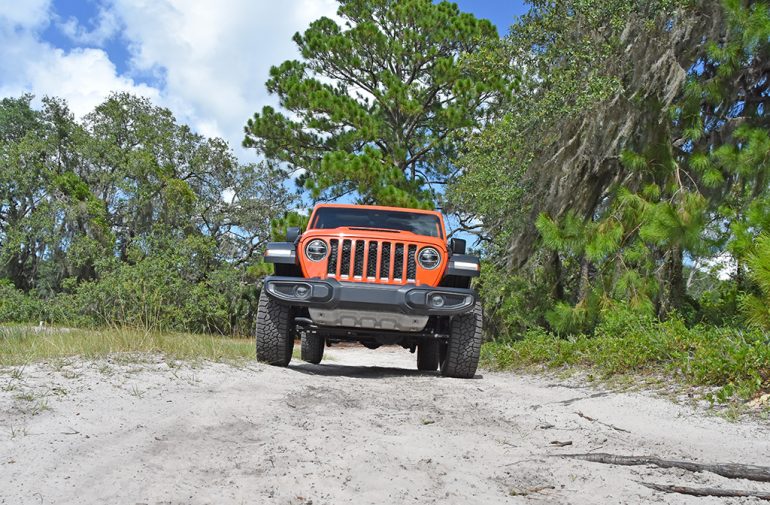 Getting down to the numbers, the new Jeep Gladiator requires you to pay to play if you want the top-trims with the available highlighted features, such as heated front seats, the 8.4-inch infotainment system, the rugged off-roading equipment you see in my Mojave test vehicle, and even adaptive cruise control, blind-spot monitors, and forward collision warning with emergency braking to name a few. Loaded up to the gills like my test vehicle, you’re looking at paying $61,505 out the door – AND – you’re gonna have to pay a little at the pump getting just 17 mpg in the city and 22 mpg highway. Still, there’s really nothing else like the Gladiator – right now! We all know a bucking horse is coming next year from Ford, but until then, the Gladiator keeps us well entertained.