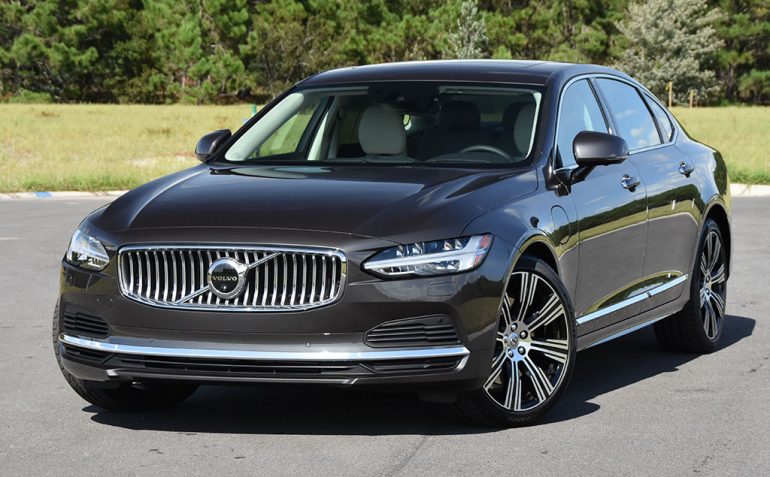 In the world of hybrid and plugin hybrid vehicles, we find a smoothly paved road to full electrification in the future of all-things automotive. Volvo has been a brand to help pave the way to electrification, and vehicles like the new S90 Recharge T8 eAWD Inscription makes a valid move of the needle for a plug-in hybrid.

I had the chance to experience the new 2021 Volvo S90 Recharge T8 eAWD Inscription, and my takeaway was positive in knowing things will only get better from here out. I say that not to take away from what the S90 plug-in hybrid has to offer but as a way of knowing that such a vehicle is only temporary to lead us to full-on electrification. In its execution, the S90 plug-in hybrid does great to provide up to 21 miles of electric range and a quite fascinating drivetrain for the use of its remarkably sophisticated hybrid system. The engine, when it is required for full-throttle power, charging the battery on the go, or to keep the S90’s large sedan body on the move at highway speeds, is the brand’s 2.0-liter turbocharged and supercharged inline-4-cylinder engine. I’ve given this same engine many praises in my previous reviews of many Volvo vehicles, and when it is coupled with the S90 Recharge T8 eAWD Inscription’s electric motor that primarily powers the rear wheels, it makes for a potent combination with a total power output of 400 horsepower and 472 lb-ft of torque. The electric motor alone is able to muster out 84 horsepower and 177 lb-ft of torque. Zero to 60 mph comes in just a tick under 5 seconds, which is inspiring for such a vehicle carrying around 4,673 pounds. 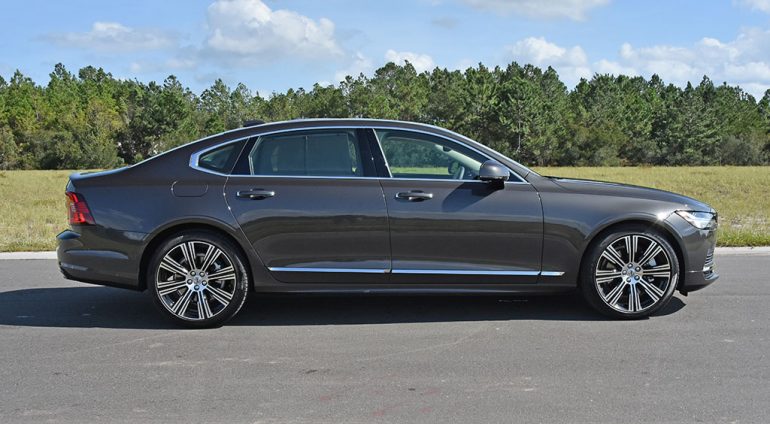 The peak power figure for the S90 T8 is only available when both the electric motor and force-fed engine are working in sync. The hybrid control system is quite smart, and the display on the 12.3-inch LCD gauge cluster that gives you a clear representation of what throttle input will take the best advantage of batter power and gas engine power. It is quite intuitive, as I found when cruising around town – I knew exactly how much throttle to give the vehicle to keep it using the battery. I was also surprised, outside of the decent fuel economy, that the system retains a robust amount of battery power for when you need to sit in the vehicle with the air-conditioner running. The engine was never used in most cases, even with the charge depleted for the plug-in aspects of the battery. I saw an average return of about 25.2 mpg when the battery was depleted, which is what you will expect to get using the S90 T8 as a hybrid and never charge it from the wall. When you charge it, the 20 miles of electric range is legit and attainable provided you don’t lay into the throttle too hard as power is down and going full throttle will force the gas engine to kick over. The EPA estimate for use of the hybrid system with a depleted battery and allowing it to do its thing is 30 mpg combined. However, using a charged battery to start off and using up a tank of gas the EPA estimates that you will get a combined 60 MPGe. 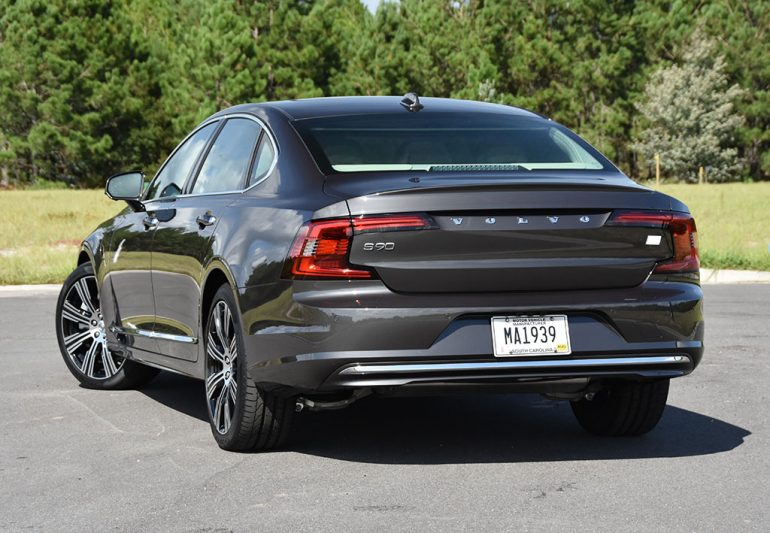 Interestingly enough, the S90 T8 plug-in hybrid doesn’t yield all that great fuel economy unless you make a point to charge up the battery and use up its 20+ miles of electric range or allow the system to cleverly sort out the charged battery’s power in the Hybrid drive mode. There is a setting to either retain the battery power or allow the engine to charge it. Lastly, there’s a Pure drive mode for electric-only power along with a Power mode to take full advantage of the electric motor and gas engine’s combined output. 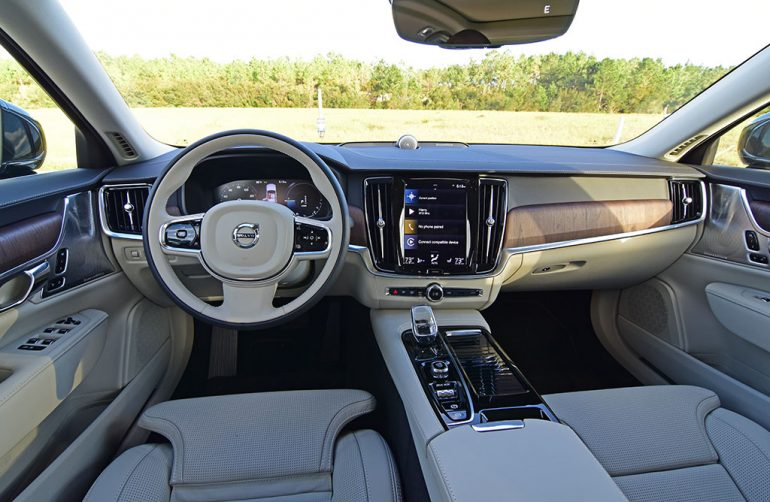 The exterior styling of the S90 T8, with hardly any differentiation from other none-hybrid trim levels, has a classy look and is highlighted with its unique traits of the Thor’s hammer-styled LED running lights up front, the large 20-inch polished aluminum wheels on my test vehicle, and the distinctive LED taillights out back. 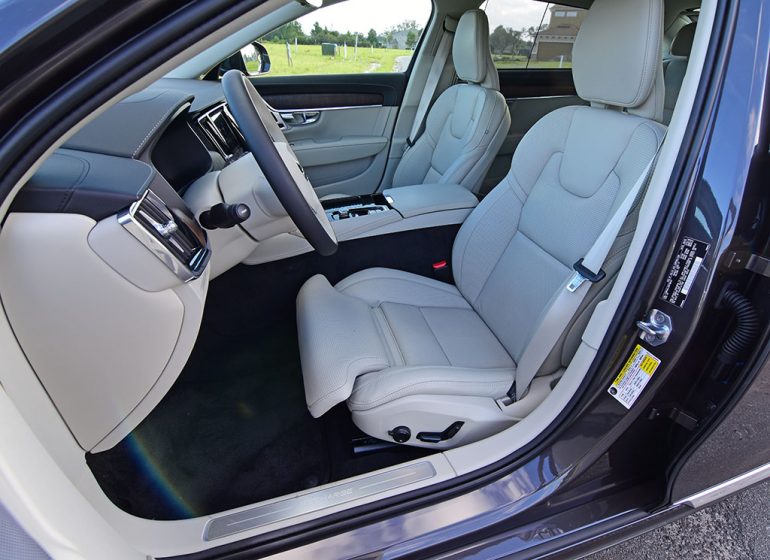 Just as expected from Volvo’s flagship sedan, the S90 in the T8 eAWD Inscription trim, the top trim level, brings a plush and unique interior to the table. From the glass shift knob to the attractive wood inlay trim, the S90 T8 is lavish and laced with the right amount of luxury amenities and features. The front seats are heated, ventilated, and massage with the proper amount of power adjustments that you expect in a luxury sedan. Out back there’s ample room, nearly merging into the category of a full-size luxury sedan. 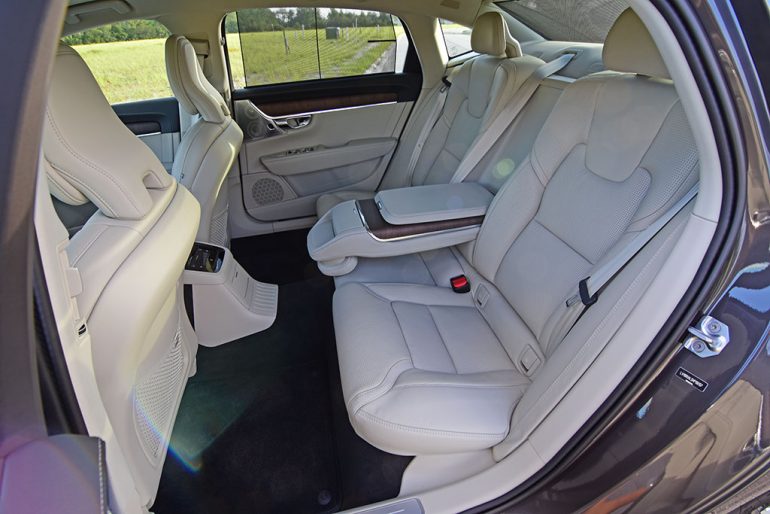 In all, Volvo has done well – again – to tide us over for a transition into electrification with the new S90 T8. The bottom-line being pricing, in which the S90 T8 finds a respected point for a plug-in hybrid with as many features and advanced safety features included in the total package. My loaded-up 2021 Volvo S90 Recharge T8 eAWD Inscription test vehicle comes to an as-tested price of $70,640.