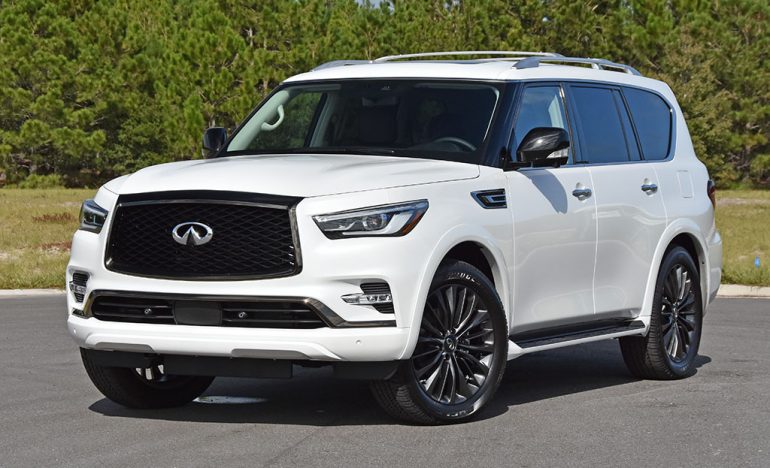 America’s thirst for large luxury body-on-frame SUVs remains to be quenched by only a select few manufacturers. Infiniti is one of the few, which has the QX80 that continues to be the big gulp go-to for those who have the need for a proven large luxury SUV, and over the past several years, the QX80 has relied on the same platform but with a few refreshing changes that keep it relevant despite its aged platform.

For the 2021 model year, the QX80 gets a few changes in its trim level offerings and making its adaptive cruise control and lane departure systems standard equipment across the board. Moreover, the 21’ model year continues the offering of an upgraded dual-screen infotainment unit from the 2020 model year, which is a nice touch to update the aged QX80 that includes Apple CarPlay and Android Auto. There are other interior trim parts that are updated along with the infotainment unit, which are welcomed changes to spruce up the cabin of the QX80 and properly fit its luxury mold. 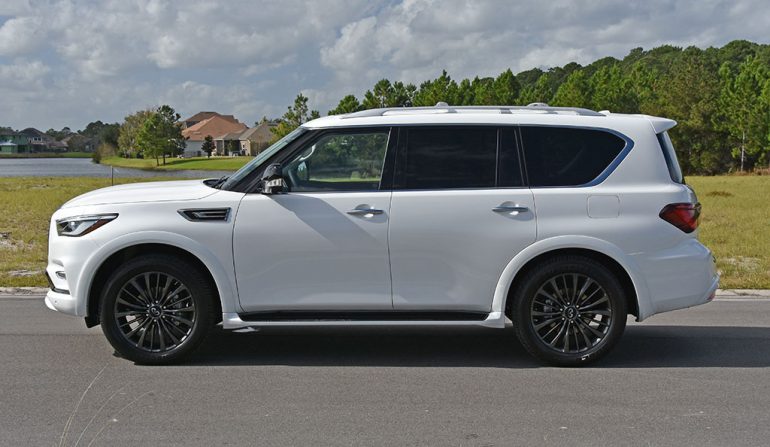 Powering the QX80 is still the job of a fuel-guzzling 5.6-liter V8 engine that produces a smooth 400 horsepower and 413 lb-ft of torque. Power is sent through the brand’s proven 7-speed automatic transmission, which doesn’t do justice in the department of fuel consumption as the QX80 AWD gets the EPA estimates of 13 mpg city and 19 mpg highway. Interestingly enough, it’s often hard to reach 19 mpg on the highway as I saw a steady 18.1 mpg and then averaged about 17.2 mpg with a bit of mixed city and highway driving. If anything, the QX80 is consistent about drinking copious amounts of fuel, and it has no shame in doing so. 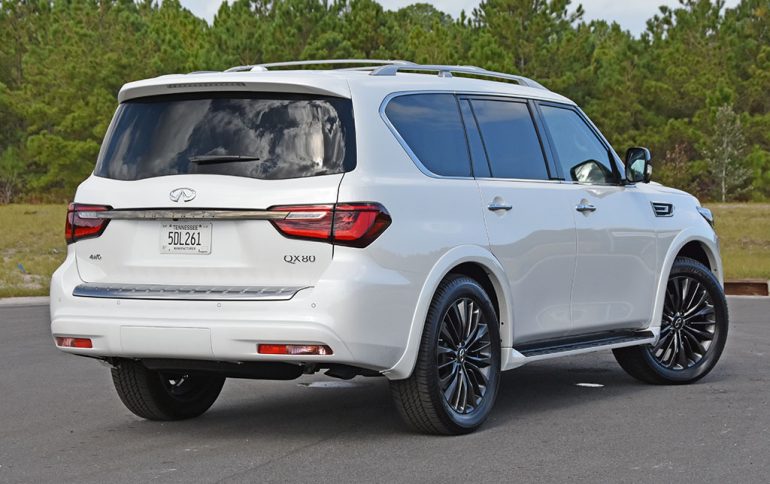 Paying the extra fuel price may be worth it for some as the V8 engine provides decent enough grunt power and is able to get the mammoth-sized SUV up to 60 mph in about 6.4 seconds. The QX80 is also able to tow up to 8,500 pounds. 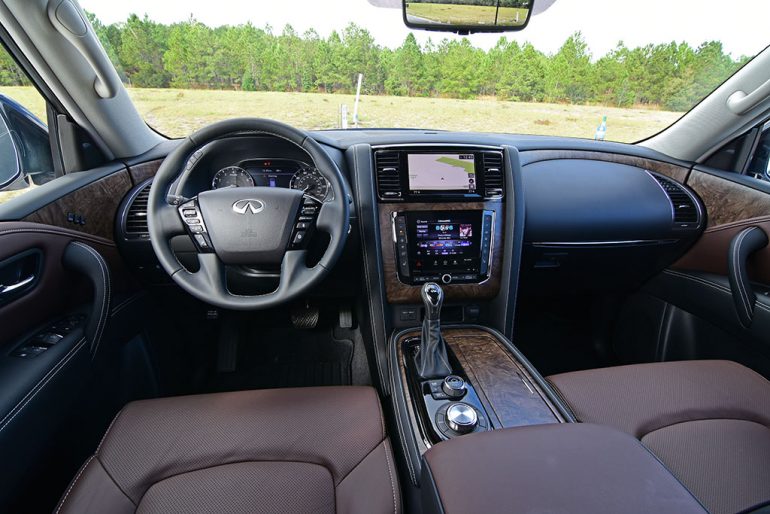 The QX80 drives well for a large SUV, and the latest suspension setup combined with the huge 22-inch wheels is surprisingly smooth without any unwanted float or body movement out on the highway. I do kind of miss the QX80 from a few years back that had a firmer ride quality that was better footed for lateral stability, in my opinion. Performance for the 2021 QX80 is decent but pushing it around bends at speed is a little concerning as the body tends to roll a bit more than I would like – especially considering the sheer size and heft of the QX80. Otherwise, driver control is good, and the addition of the Smart Review Mirror system (a live high-resolution rear camera feed of the rearview displayed in the rearview mirror) is another unique offering to add safety to the equation where your rear passengers don’t block your rearward view. 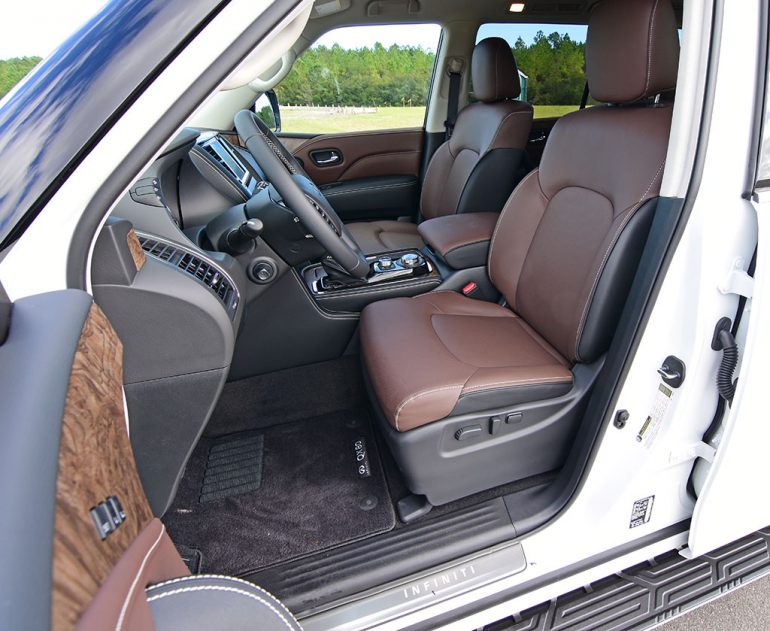 Where the QX80 wins over many is from its large form factor to give its passengers plenty of space and enough cargo room to tote a bag for each passenger. Packing in three passengers in the third row is no problem. The second row comfortably seats two in the captain’s chairs in my test vehicle. The second row can be configured with a bench seat for a total seating capacity of 8 in the QX80. 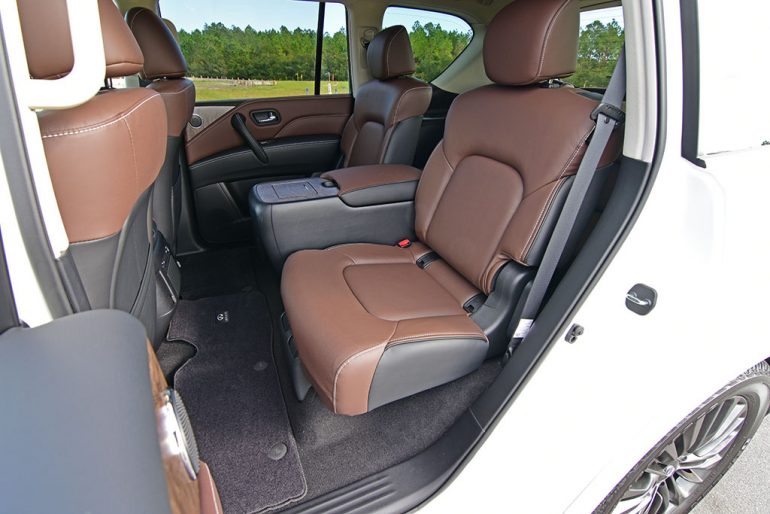 The expanded trim levels for the 2021 model year open up more “options” for buyers who don’t want to lay down a hefty payment just to get a few desirable features, such as the large 22-inch wheels now offered on additional trim levels. Though, I’m not too sure the re-working of the trim levels is all that beneficial as luxury SUV buyers want a long list of equipment, and that list is still reserved for the top-level trim now being the Sensory trim. Unfortunately, long gone are the Limited-edition trims for the QX80, which I quite enjoyed in the past as they had some uniqueness to set them apart from the rest of the QX80 lineup, which can often get lost in the mix of large mundane SUVs. 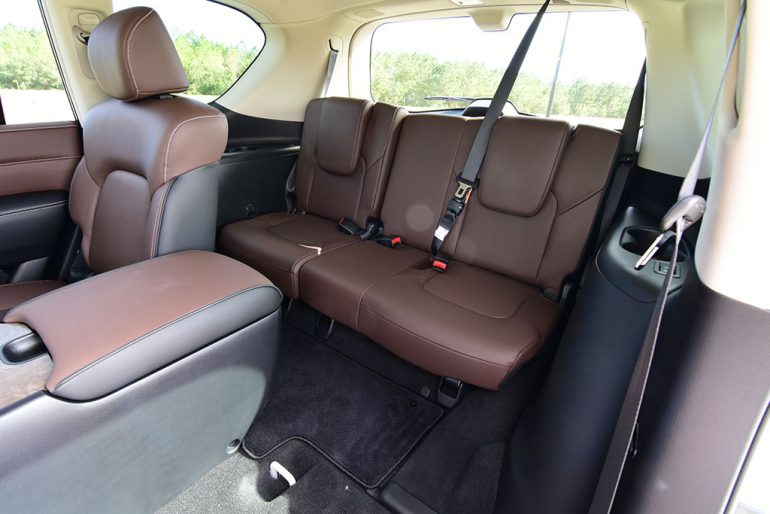 It’s possible that Infiniti still has some work cut out to win over those who drive its competition. Still, the QX80 is a rarity for a body-on-frame large luxury SUV, and with its aged platform, one can conclude that it’s quite a proven and reliable vehicle at this juncture with just enough equipment to appease luxury SUV buyers. My mid-level trimmed QX80 Premium Select AWD test vehicle is at a sweet spot for pricing at $81,185. 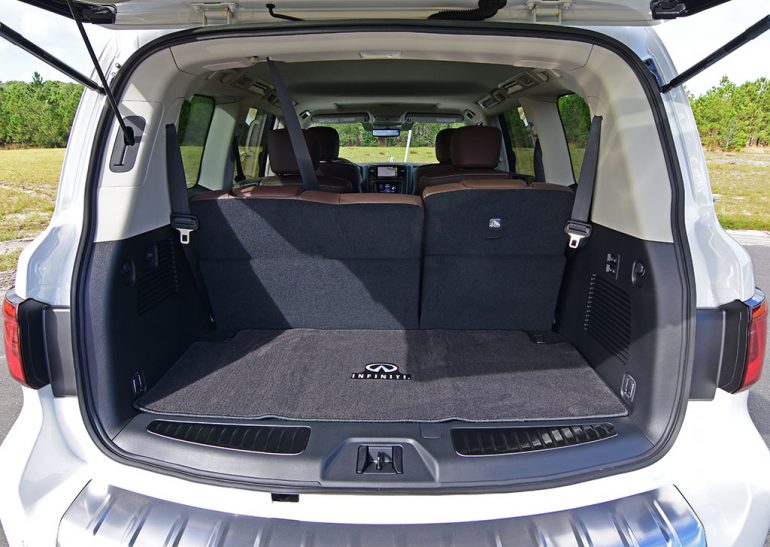