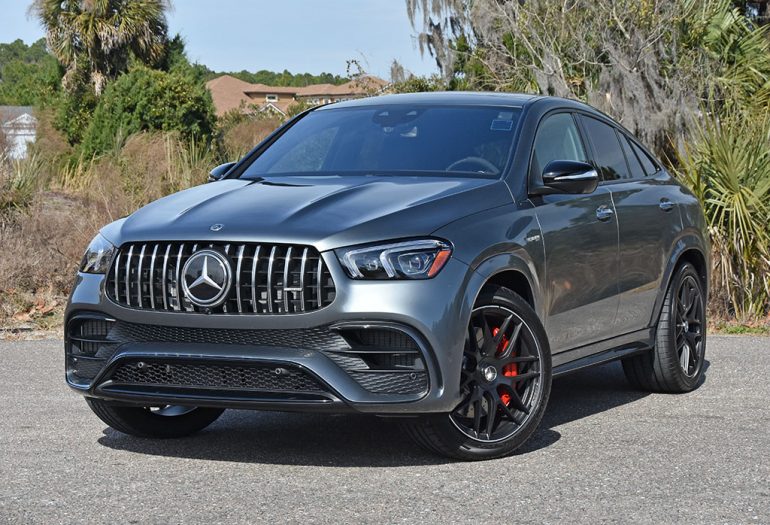 I sometimes find myself turning my head and giving a vehicle my attention when it stands out among the countless vanilla verities of automobiles on today’s roads. Those vehicles that get my undivided attention are often rare sports cars or exotics, and occasionally I tend to glance at modern-day crossover utility vehicles that does a little something extra to depart from the typical – one of those being the latest Mercedes-AMG GLE 63S Coupe.

Mercedes-Benz hasn’t slowed down one bit when it comes to having a vast selection of automobiles that covers just about every luxury segment in existence. To add to that, Mercedes-AMG seems to introduce vehicles that attempt to redefine or create new luxury performance segments, which is where the new 2021 GLE 63S Coupe fits. The “Coupe” part of the GLE 63S doesn’t mean it has two doors, but rather a coupe-like design with its low sloping roofline that carries through the A-pillar and exits through the rear hatch. The unique design is nothing new, but it remains to be something quite unique, which is also found in its direct competition from the BMW X6M and Porsche Cayenne Coupe Turbo. 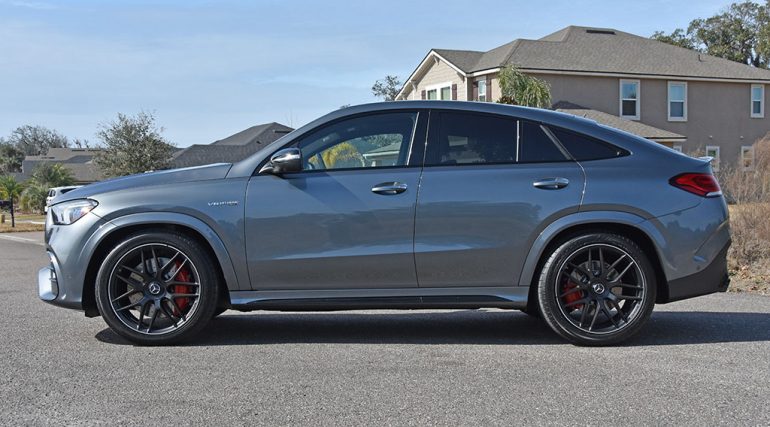 The uniqueness of the new GLE 63S Coupe is both good and bad. The good part is that it looks distinctive, and it is downright fun with over 600 horsepower to play with. The bad is that it doesn’t have the usable space that you expect from a “crossover,” but more on that later. 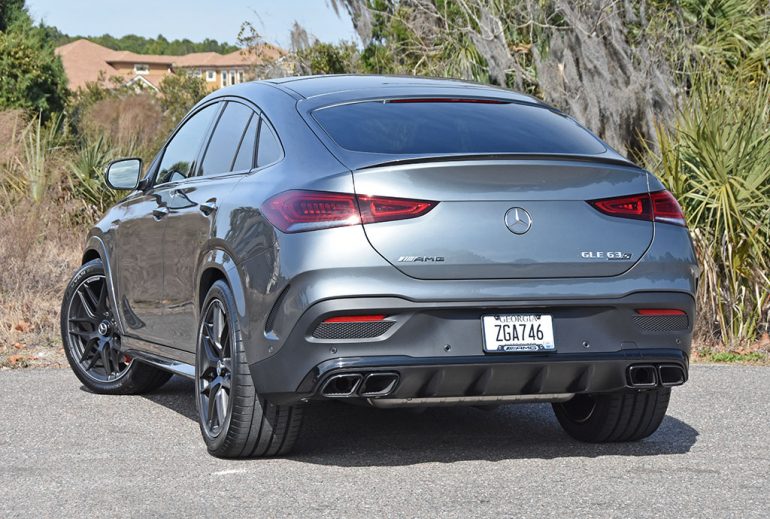 The fun begins with 603 horsepower and 627 lb-ft of torque from a twin-turbo 4.0-liter V8 engine, and an additional 21 horsepower and 184 lb-ft of torque added from an EQ Boost mild-hybrid system. Power is sent to all four wheels after snapping off shifts by a rather smart 9-speed automatic transmission. The drivetrain of the GLE 63S Coupe is a marvel in itself. Though, it is not to be confused with a full-on hybrid, it is more of a system that has a power-assist from its electric motor and is only taxed when the engine is running or coasting and stopping at a traffic light to keep all of the accessory items powered. The mild-hybrid system is a commonality within the Mercedes lineup, one that has allowed engineers to avoid fan belts and include all of the engine components internally where the engine is now a “module” setup. If that sounds expensive, then you’re paying attention! And don’t expect to save much fuel by milking the mild-hybrid’s system’s eagerness to decouple the wheels from the engine when coasting and shutting down the engine. While your air-conditioned won’t quickly get stale when the start/stop system is activated, your MPG score won’t get far past the poor EPA estimates of 15 mpg city and 19 mpg highway. 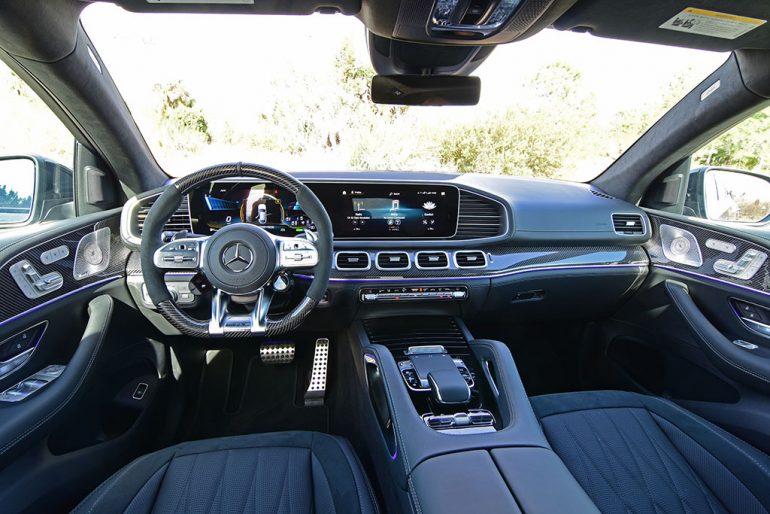 The driving dynamics of the GLE 63S Coupe attempt to defy the laws of physics considering you’re moving around just over 5,500 pounds riding on large 22-inch wheels and Yokohama Advan Sport V107 summer performance tires, 285/40R-22 fronts and massively-wide 325/35R-22 in the rear. The change to Yokohama tires from the expected Michelins is surprising, but after witnessing their quiet and grippy ride qualities, I can understand – but not to say that they are any better or worse than comparable Michelin rubber. The way the GLE 63S Coupe feels is somewhat heavy, but the adaptive dampers and air spring setup try to hide some of that heft along with the powerful Biturbo V8 getting the beastly “Coupe” up to 60 mph in just 3.7 seconds. 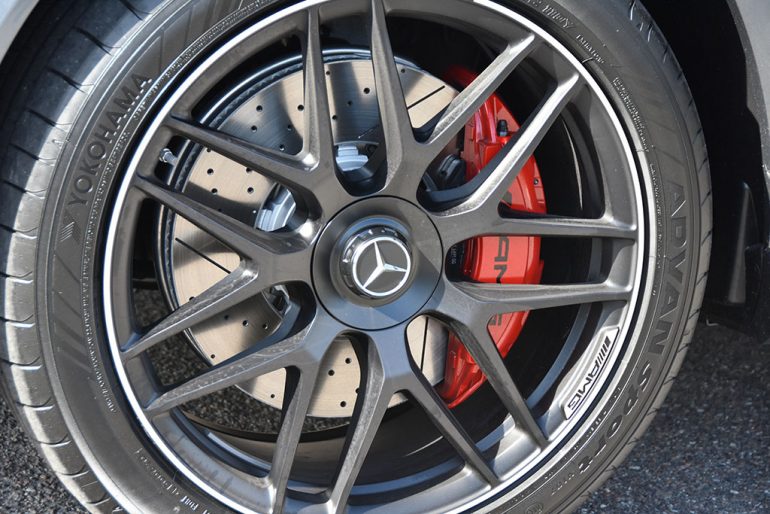 The GLE 63S Coupe is a beast that wears unique clothing. Its bold look from up front signifies the AMG branding from its panamericana grille and then gets a little wild out back with a hunched-down roof and rear window that may be an acquired taste for some. There’s no denying the distinctive style of the GLE 63S Coupe. 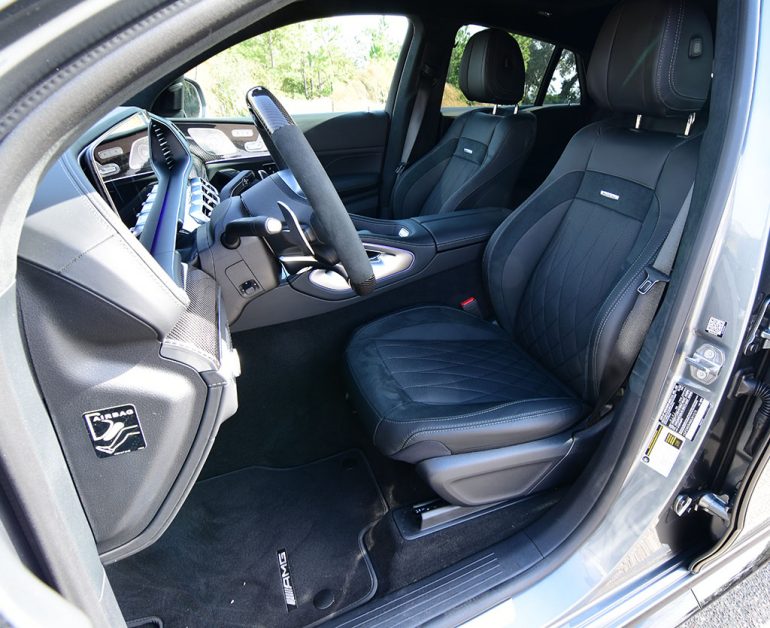 Inside, the GLE 63S Coupe fits the new mold of the latest GLE and other crossover utility vehicles in the Benz lineup. The major discernments remain to be the GLE 63S Coupe’s low sloping roofline, which compromises headroom and cargo capacity. Fortunately, the only compromise for the headroom is the ingress and egress. Basically, if you’re 6-feet tall or more like myself, you’re almost guaranteed to hit your head on the pillar upon getting into the GLE 63S Coupe. Thankfully the actual roof is high enough that you can sit comfortably in the perfectly-bolstered massaging, heated, and ventilated front seats, which are part of the optional Energizing Comfort Package. The other major compromise in the GLE 63S Coupe is a slight sacrifice of cargo room that you would otherwise expect to be accommodating like its normal GLE siblings. 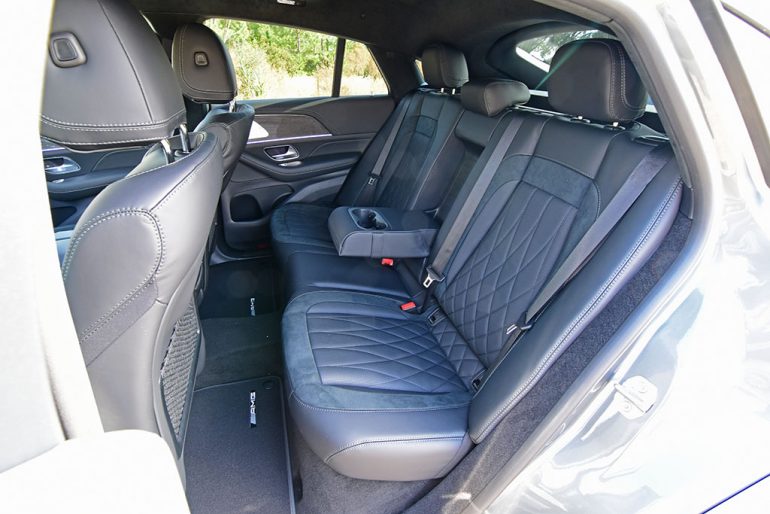 Technology has been a forte for Mercedes in recent models, much thanks to the advancement of the MBUX (Mercedes-Benz User Experience) infotainment system that’s fed through a 12.3-inch touchscreen and accented by a matching non-touch gauge cluster screen. The system, as I have noted in many of my previous Mercedes reviews, is quite dynamic. There is a learning curve that most will have to struggle through, but at the end of that curve, there’s a lot to enjoy for interacting with your Mercedes. The voice response and plethora of vehicle features that it controls is a major benefit of the MBUX system as an alternative to the touchscreen and touchpad, which can be hailed by just saying, “Hey Mercedes.” The integration of Apple CarPlay and Android Auto come standard, along with a Wi-Fi hotspot. 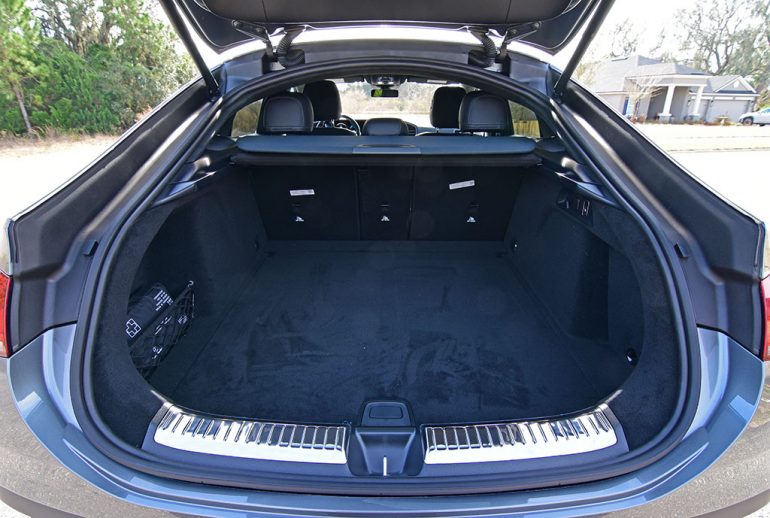 In the area of safety, Mercedes didn’t leave any stones unturned when you’re shopping the most powerful crossovers they have to offer. There’s a myriad of active safety and driver-assist features, which also integrates welcomed semi-autonomous driving that can even change lanes autonomously with a flick of the turn signal stalk. 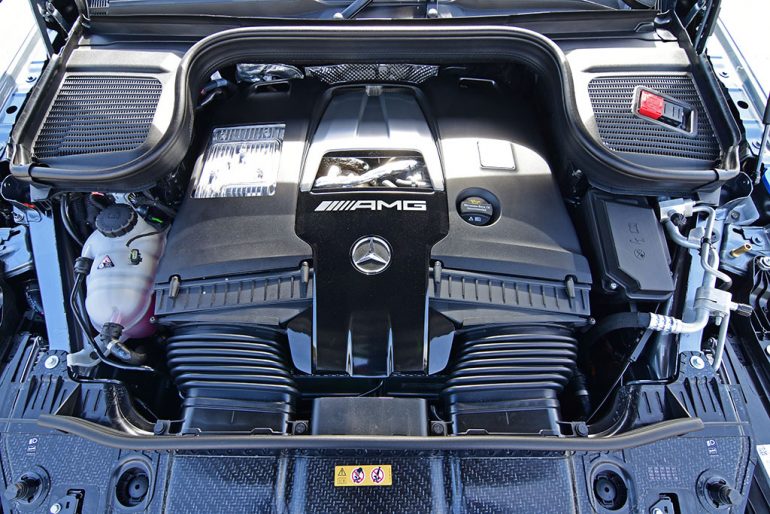 There’s a lot to digest in the 2021 Mercedes-AMG GLE 63S Coupe, and there’s a lot that’s compromised in the form of expected usable utility space and a low pillar that you’re assured to hit your head on if you’re the least bit tall. The GLE 63S Coupe can be defined as somewhat of a mixed bag that doesn’t know if it wants to be an SUV or a sports car. However, that’s the fun in such a vehicle, it’s unapologetic in its performance abilities but to get such a unique vehicle, you’re going to have to pay to play, upwards of six figures. The 2021 GLE 63S Coupe starts at $116,000, and when you option it out nicely like my test vehicle, you’re looking at $128,500, which is a pretty penny for an exclusive experience.