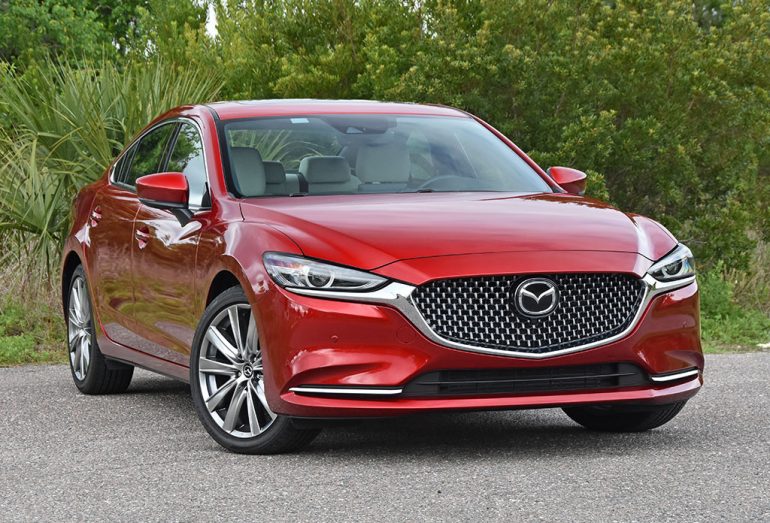 With the sedan segment of vehicles slowly losing sales to CUVs and SUVs, manufacturers must keep their sedans fresh and innovative. Mazda has been one manufacturer to do well in keeping their midsized Mazda6 relevant and probably one of the best looking none-luxury mainstream sedans on the current market. To elevate the Mazda6 to new heights the brand decided to offer a more powerful 2.5-liter turbocharged 4-cylinder engine to the offering a couple of years ago, which I happily welcomed for a review that followed the new engine for the 2018 model year.

Since the 2018 Mazda6 with the more powerful engine, the impressive sedan has aged well retaining its sleek good looks and proudly boasting its 250 horsepower and 310 lb-ft of torque sent to its front wheels. Provided that you keep the Mazda6 filled with premium unleaded fuel, you can expect it to perform quite well dashing to 60 mph in just 6.4 seconds. The use of regular fuel will slightly decrease horsepower to 227, but even then, the Mazda6 Signature 2.5T trim is a much better performer than the standard engine found in the lower trim levels. 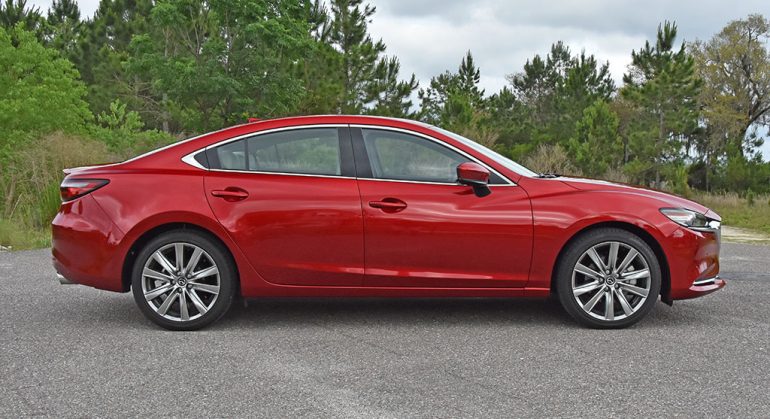 The use of an older 6-speed automatic transmission may be one of the only couple drawbacks of the Mazda6. Though, the 6-speed is direct in its shifts and is properly tuned to hit the right gear every time to take full advantage of the interesting torque curve of the turbocharged engine that has a healthy midrange that accelerates well at highway speed and doesn’t require the transmission to downshift out of 6th gear. Most of what the Mazda6 offers in the top-level trim and its delightful, turbocharged engine is fit for real-world situations and touts a decent fuel economy to often surpass its EPA estimates of 23 mpg city and 31 mpg highway. I often saw highway numbers as high as 33.1 mpg and the city figure remained to be around 23 mpg. 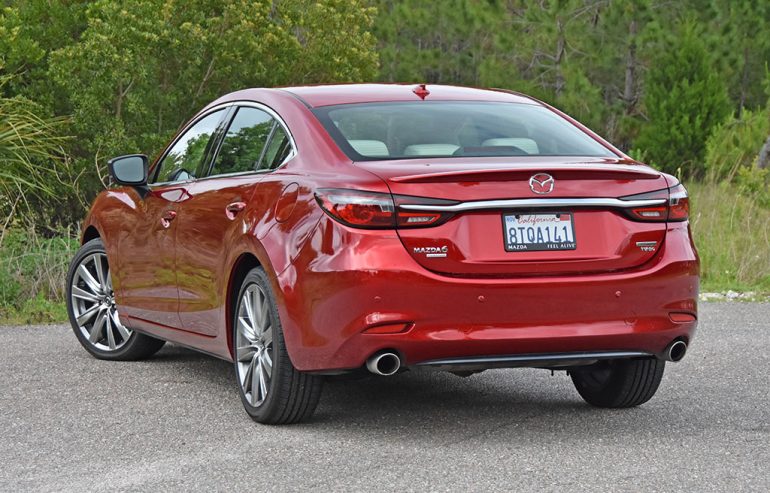 Mazda’s technology has remained on a level playing field in the past few years. The use of a somewhat smallish 7-inch infotainment touchscreen could use some improvements as the system continues to lock you out from using it through touching the screen. Unfortunately, you’re left to controlling the system through the central physical controller mounted low in front of the center armrest and cup holders, which can be a bit cumbersome and distracting at times I find. Fortunately, there’s the benefit of standard wireless Apple CarPlay and Android Auto for the 2021 model year for all trims, which can only be controlled through the physical controls when the vehicle is in motion. When stopped, the touchscreen can then be used. 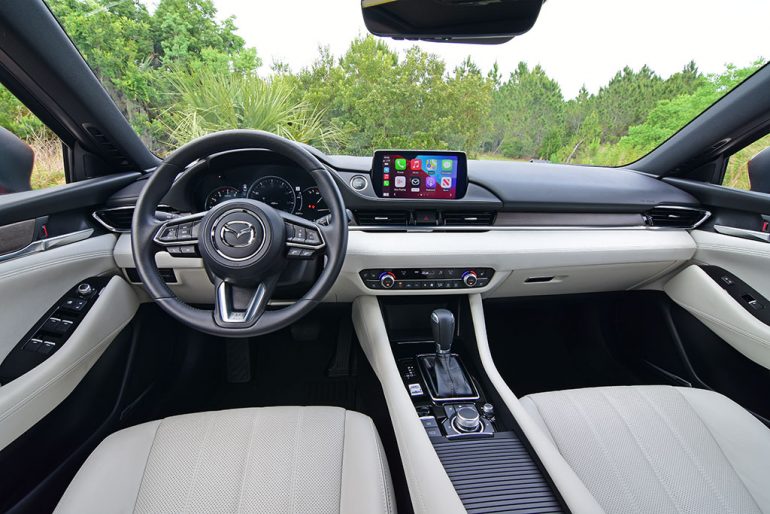 As most of the Mazda6 has remained mostly unchanged in the past couple of years, there’s a new Carbon Edition appearance package available to elevate the good looks of the Mazda6 and bring a sportier appeal with its darkened 19-inch wheels and exterior trim with red leather seats and a special gray exterior paint. 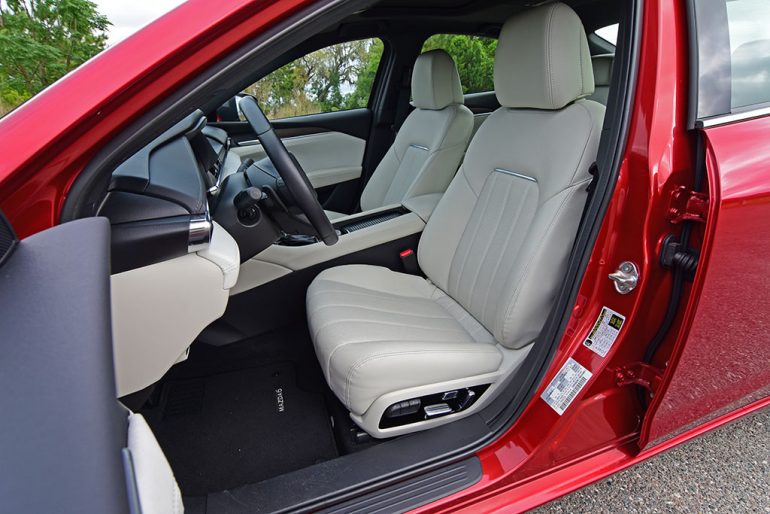 My top-level Signature trim Mazda6 test vehicle still is quite the looker with its attractive Soul Red Crystal Metallic paint and a delightful premium interior that’s laced with plenty soft-touch surfaces, upgraded leather upholstery, ambient interior lighting, rear automatic braking, driver attention warning, and a rather poor resolution 360-degree camera system. One thing to note about the 360-degree camera, which desperately needs an update, is that it never defaults to the 360-degree view when backing up – something that some drivers of the Mazda6 want. After all, what’s the point of having a 360 camera if you cannot have it activated right away when shifting into reverse. Instead, you’re forced to press an on-screen button each time when shifting into reverse to bring up the 360-camera views, which look very grainy and low-quality fed through a small-for-2021 7-inch screen. 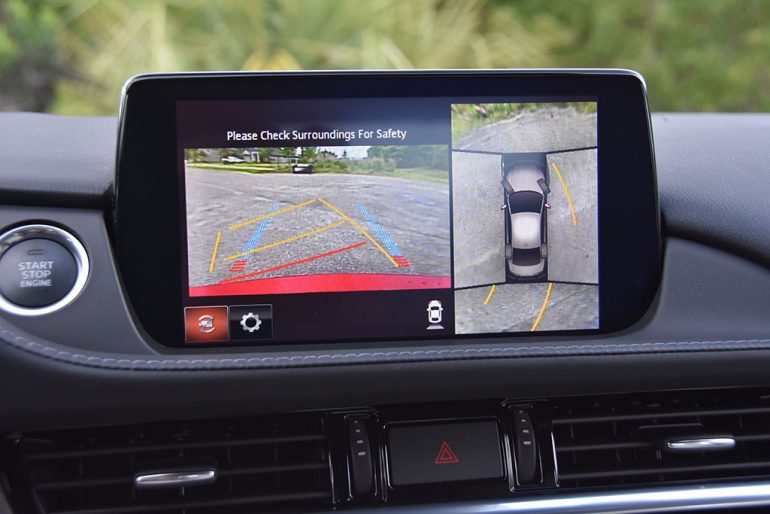 The 2021 Mazda6, putting several premium features and characteristics at the forefront, is an exceptional value considering the collective of all that it offers and the powerful turbocharged engine. The Mazda6 does everything excellent -in the way it drives, including having a nice balance of sport and luxury that I have no issue driving for hundreds of miles in comfort. From its ventilated and heated front seats and rear heated outboard seats to the quiet cabin thanks to acoustic laminate glass for the front doors and front windshield – the Mazda6 is an excellent alternative to entry-level luxury sedans that doesn’t break the bank. 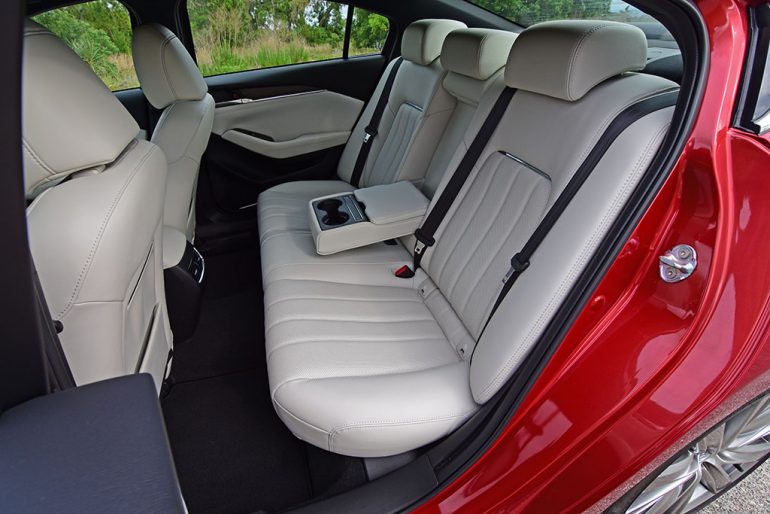 My loaded-up top-trim Mazda6 Signature test vehicle comes to a respectable price of just $37,390. Considering all the features that you get and an exceptionally quiet and powerful driving characteristic, the Mazda6 is my number one recommended mainstream midsized sedan and has been since the 2018 model year that offered the new turbocharged engine.