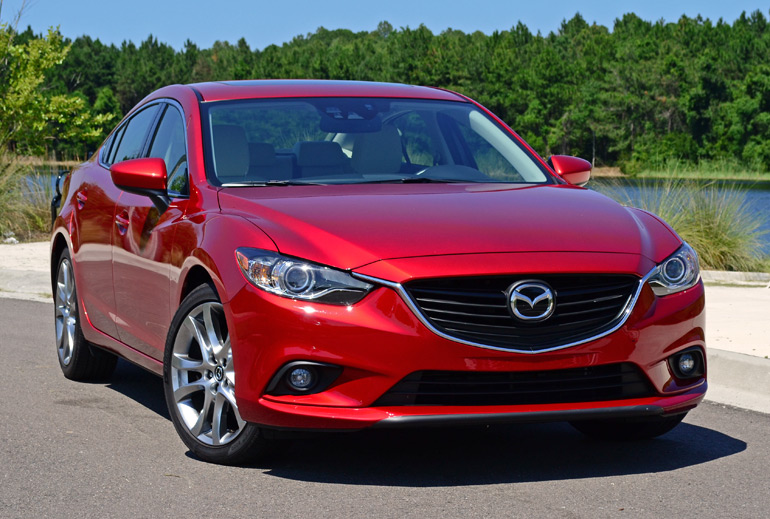 The Mazda6 has always been that ‘other’ sedan that many were intrigued about where only some took the liberty of purchasing one. For those who did drive a Mazda6, they knew exactly what they had and were proud to have an extra dash of sport to their midsized sedan that served duty for every task you could put such a car up to. With the latest iteration of the Mazda6, styling takes a new approach to stand out in the crowd while the economic side joins the forefront to let everyone know just what Mazda is up to – all in the scheme of being one of the best looking affordable mainstream midsized sedans on the road today. 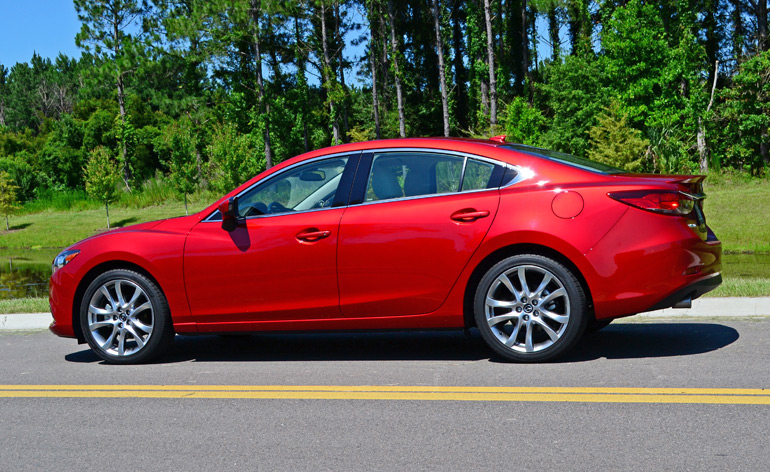 The new 2015 Mazda6 continues on this new formula that was set in motion for the 2014 model year. To quickly chart the changes for the 2015 Mazda6, all trims get an all-four power window up/down one-touch feature and keyless ignition and entry on the Touring trim, in addition to a new option package combining sunroof and satellite radio through an upgraded audio system. 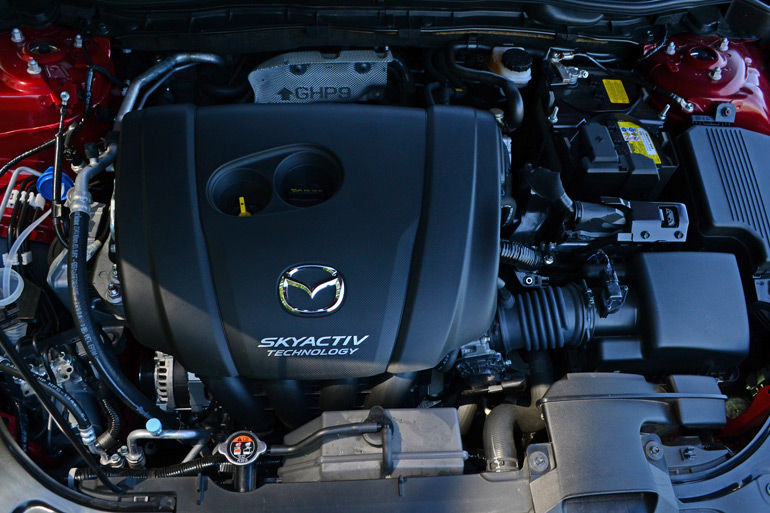 Carrying on the performance duties is the single powermill being the 2.5-liter 4-cylinder engine with SkyActiv technology. The Mazda6 still makes due with the 2.5-liter engine producing 184 horsepower at 5,700 rpm and 185 ft-lbs of torque at just 3,250 rpm. Even though on paper the Mazda6’s power numbers are not really attention-getters, the power delivery is responsive and proves to be quite adequate for the Mazda6. The 6-speed automatic transmission does a superb job at landing in the proper gear and down-shifting quickly to keep the engine turning to emit a sense of athleticism. 0-60 mph time comes in at about 7.6 seconds. That acceleration actually never feels sluggish accentuating that the drivetrain is as efficient as possible in its power delivery. Much to do about the conservative power figures pays compliment to the high mpg numbers of my Mazda6 i Grand Touring reaching 40 mpg on the highway and 28 mpg in the city. The 40 mpg figure is an aspiring reach for a midsized sedan outside of the hybrid vernacular. Though, the Mazda6 i Grand Touring pulls it off with the help if its unique i-ELOOP (intelligent energy loop) system incorporating a capacitor to temporarily store energy captured during deceleration, which can then be used to power accessories to take the load off of the alternator and essentially save fuel. The Mazda6 i Grand Touring is the only trim to get the i-ELOOP system. Other than a separate gauge cluster LCD screen i-ELOOP menu set and better gas mileage, there is no distinguishable difference in non-i-ELOOP-equipped Mazda6 vehicles. 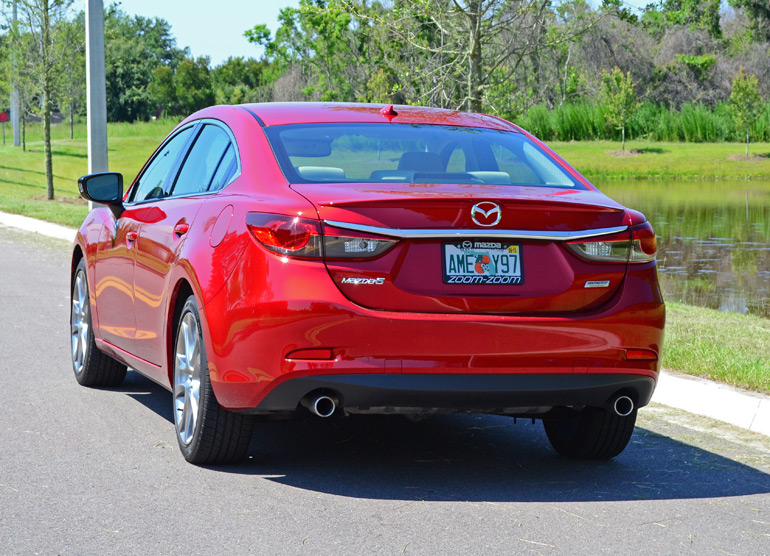 Mazda’s choice to start the Mazda6 off with its new design having only one engine choice is a formidable approach to efficiency. In a way, Mazda has pulled off a major feat with only a short reach in the performance arena. The Mazda6, aside from the engine’s pulling power, handles well and has a few sporty tricks up its sleeves. For one, the suspension on my Mazda6 i Grand Touring, the top-end trim level, has a firm suspension but plays a nice balancing act for comfort and sport. The chassis dynamics are among the best in the business and it all harmonizes a good ride quality that hardly ever falters when it is either pushed near its lateral handling limits or keeping things stable while smoothing out road bumps and uneven surfaces. It is not to say that the Mazda6 i Grand Touring is a sports sedan through and through, it just takes a sportier approach than its direct competition – something well-known in Mazda’s Zoom-Zoom spirit. Using the steering wheel shift paddles and/or the Sport button keeps things slightly entertaining but nothing to the level of the mildest modern-day sports car.

The interior of the 2015 Mazda6 is somewhat of a bland mix of black with the exception of the perforated leather-trimmed sport seats. In a way, nothing really stands out or accents the monotone mood of the Mazda6’s cabin. This is not to say it is all doom and gloom when it comes to the interior. The Mazda6 has a rather functional cabin and a welcomed redundancy of many controls when it comes to the infotainment system. The color LCD touchscreen, mostly on the small side, houses the infotainment information and optional navigation system powered by TomTom. Still, like the Mazda6’s few siblings, the TomTom-powered navigation system is mundane and can be cumbersome to access many features aside from simply entering a new destination. Other controls for the infotainment system, such as Audio and settings, all fall into a simple menu set with clear and concise on-screen buttons. Use of the dedicated function buttons on the dashboard are mimicked by the same set on the floorboard rearward of the gear shifter with the addition of a turn-scroll dial. The versatility in using the system makes up for the navigation’s slight shortcomings in its remedial perception. The simple white-lettered on a black background gauge cluster houses a simple display with a monotone LCD screen in the right-side pod for displaying pertinent vehicle information apart from the speedometer, odometer, rpm gauge and shift indicator. In all, the interior of the Mazda6 is has an easy functionality about it but lacks any attention-getting contrasts apart from the white-leather seating surfaces and white inserts on the door trim. 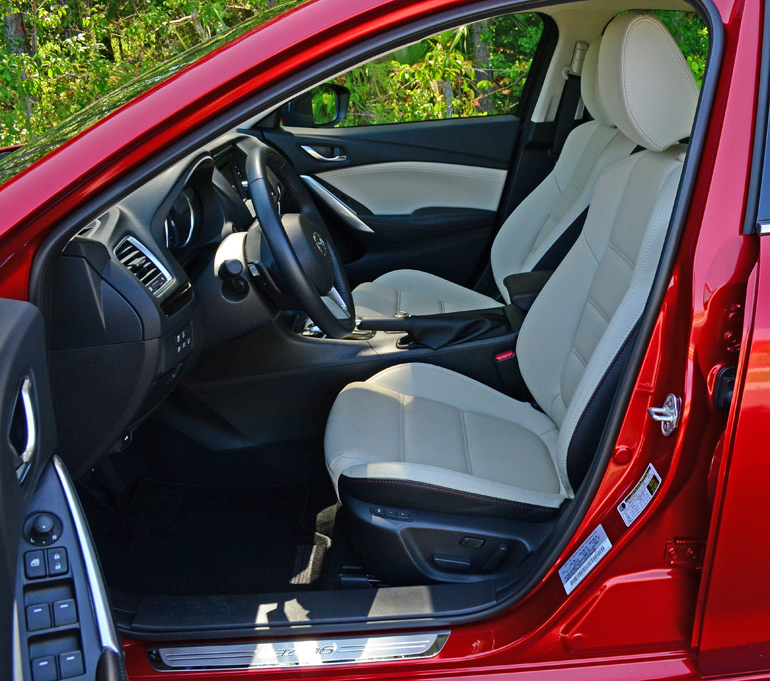 The exterior design approach of the new Mazda6, especially in the Soul Red color, is awe-inspiring, which was taken mostly from the original Takeri Concept car (KODO Soul of Motion design) that captivated audiences many years ago during its first debut. In retaining that design and new language throughout the full line Mazda vehicles, the Mazda6 leads the way for a stunning attractiveness that is sporty yet contemporary enough to engage a wide audience of consumers. Bottom line, there is nothing really vanilla about the new 2015 Mazda6, and that is a good thing. The Mazda6 is apt to catch onto those looking outside of their common midsized sedan box. 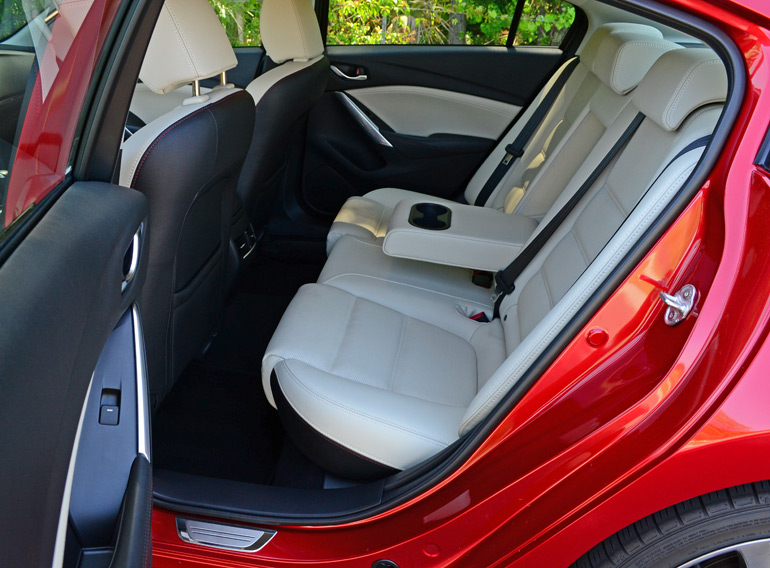 With a starting price of about $22,000 for a 6-speed manual-equipped Mazda6 i Sport, it places itself on a level playing field with competition. Equipped with all of the options on my Mazda6 i Grand Touring trimmed test vehicle, including the GT technology package (i-ELOOP regenerative engine braking system, auto high beam control, forward obstruction warning, lane departure warning and active grill shutters) it brings the as-tested price to $33,345. On top of that, my test vehicle featured several luxury amenities and highly sought-after features as standard equipment, such as adaptive HID headlights w/ auto highbeam, LED tail lights, 8-day power driver’s seat (4-way power passenger seat), 19-inch alloy wheels, rain-sensing wipers, advanced keyless entry w/ push-button start, power moonroof, dual-zone auto climate controls, smart city brake support, review camera, and a decent-sounding 11-speaker Bose Audio system. I would go as far as to say that the new Mazda6 is probably the best mainstream midsized sedan you can buy for those who want something well outside of the mundane vanilla-flavored offerings we see in abundant numbers on the road today.