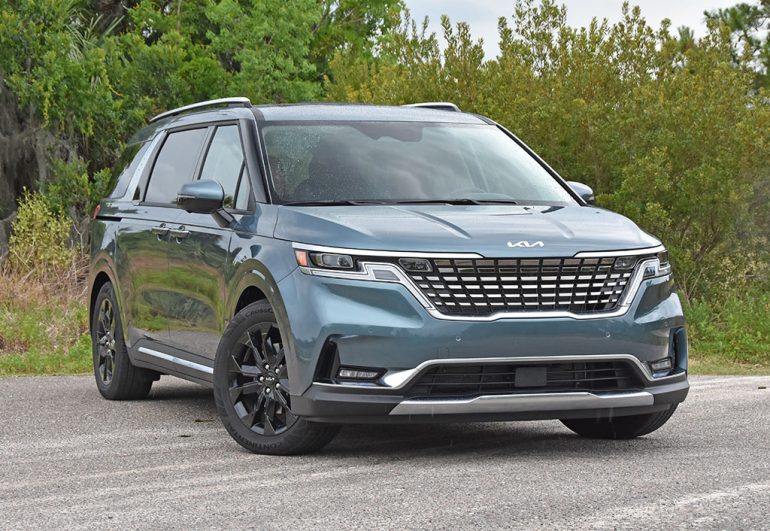 As it’s no surprise, the current automotive landscape is dominated by crossovers where they have left other segments with a challenge to win over the masses by being creative and going outside of the box. Such can be said about the all-new Kia Carnival, a vehicle that’s being dubbed as a Multi-Purpose Vehicle (MPV) instead of the traditional sense of having the minivan label. While the new Carnival takes up the place of the outgoing Kia Sedona minivan, the MPV part of the new Carnival plays quite well considering many unique characteristics that make it one of the best, most luxurious, and enjoyable “minivans” I’ve ever driven.

The new Kia Carnival, with a clever name that plays on the liveliness of such a vehicle, doesn’t look the typical part of a minivan at first glance. The good looks of the Carnival play to the tune of a crossover utility vehicle (CUV), which isn’t’ a bad thing or an intentional way of Kia attempting to shed the minivan theme. It is, however, a way of letting CUV/SUV purists know that there’s a viable alternative to the world of paying big bucks for a CUV/SUV when you can spend a little less and get MORE – more space, more cargo room, more comfort, and more family-friendly accommodations. And that’s just what you get in the new Kia Carnival, especially in the top-level SX Prestige trim of my test vehicle you see here. 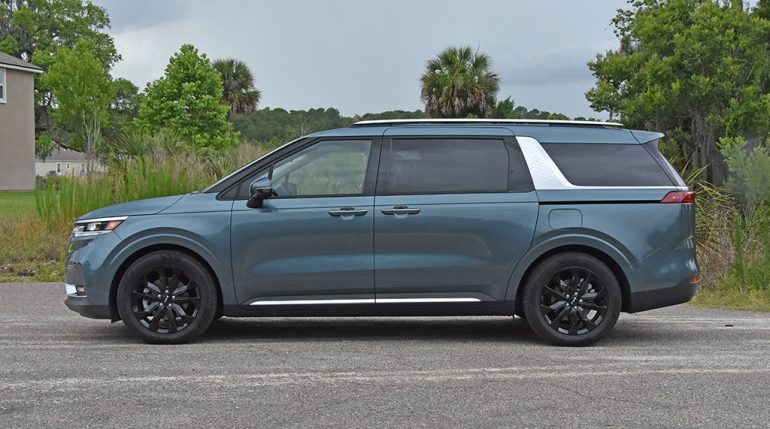 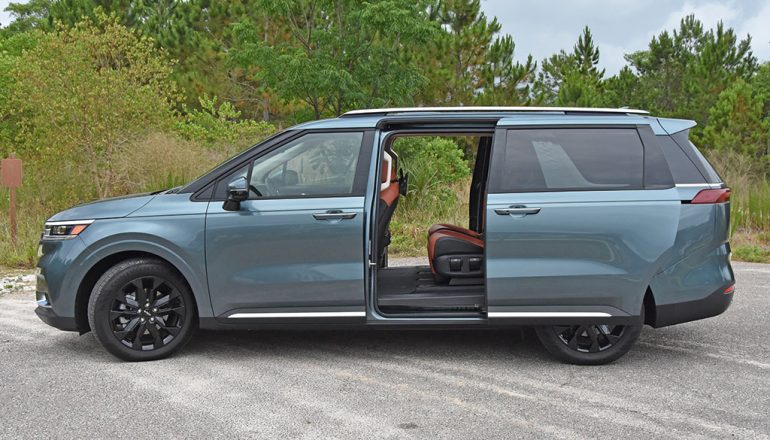 Kia has done well with their recent Telluride crossover – so well that the three-row crossover is hard to find and comes with steep dealer markups if you find one on the local lot. The all-new Carnival doesn’t just build off the nearly perfected formula of the Telluride, but instead, it takes the best bits of what you expect out of a minivan and molds them into what has worked for Kia in the recent past for vehicles like the Telluride. 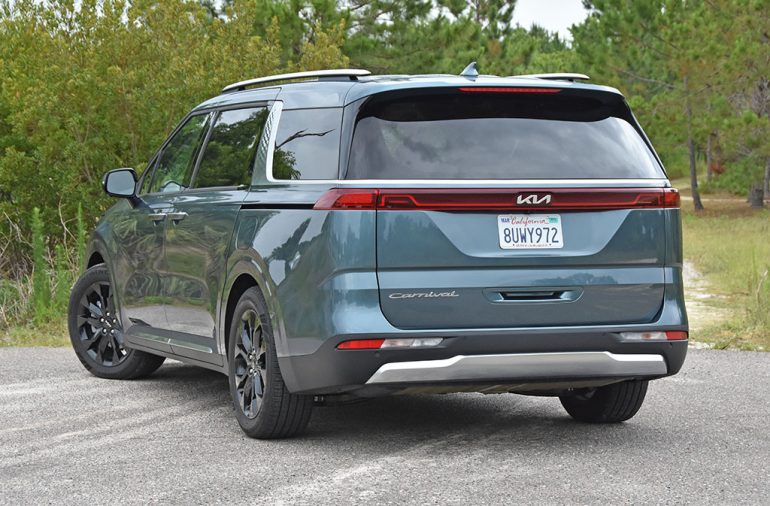 The new Carnival gets the brand’s familiar 3.5-liter V6 engine producing 290 horsepower and 262 lb-ft of torque sent through an 8-speed automatic transmission to power the front wheels. The power delivery is smooth, and the careful balance of the Carnival is excellent to ward off unwanted front wheel spin. The Carnival rides decent without a full load of people and cargo but you can tell that the suspension tuning makes way for loading up the Carnival without much compromise in the ride quality. 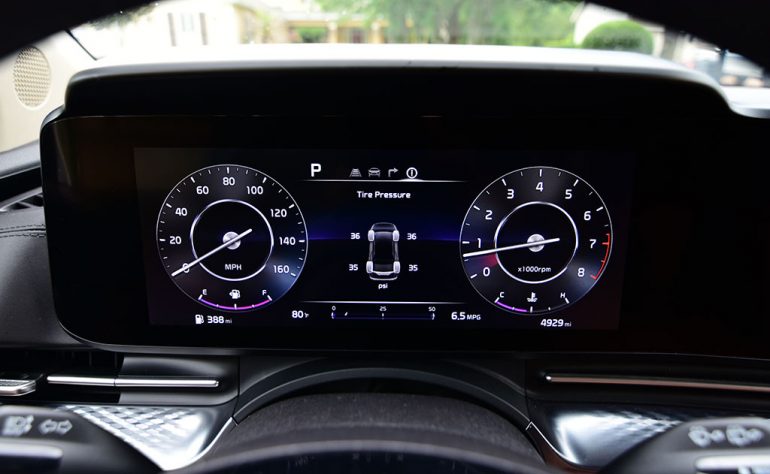 The fuel economy is mostly consistent at the EPA estimated numbers of 19 mpg city, 26 mpg highway, and 22 mpg combined. Though, the power from the V6 engine seems a little taxed when you load the Carnival up with several passengers, which yields lower MPG numbers well under the EPA estimates. 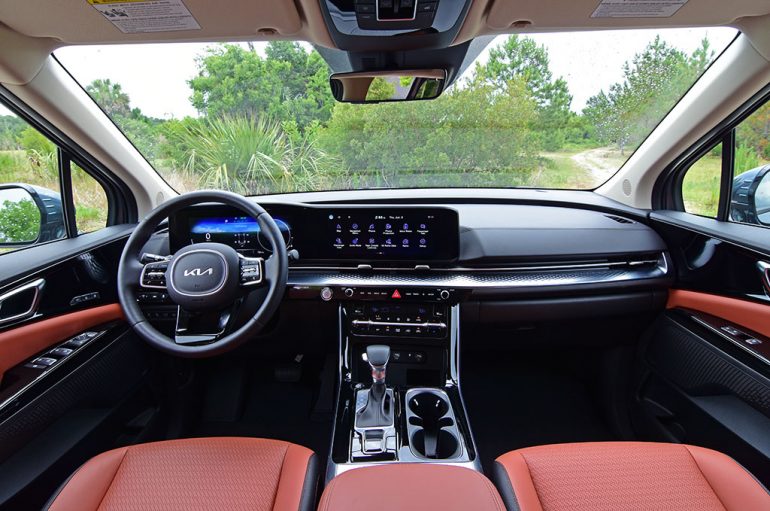 There’s plenty of “items,” comfort, and accommodations to be explored in the new Kia Carnival starting with the comfy seats up front with heating and ventilation in the SX Prestige trim. The amount of tech filling the cabin is welcomed, as there’s a 12.3-inch infotainment touchscreen along with an equal-sized customizable gauge cluster that conveniently displays a live feed of your corresponding blind spot side when you toggle your signal – a feature I’ve loved for years since Kia and Hyundai introduced such. The controls, with just the right number of buttons, are all easy to reach and mostly user-friendly even though the physical buttons are the capacitive touch type. There’s a clever passenger talk system and video monitor that can be brought up to project the driver’s voice to the rear passengers along with viewing a live feed of each occupant in the rear via the large touchscreen. There’s even a safe exit assist that helps prevent rear passengers from opening one of the power-sliding doors from opening into traffic approaching from behind. The power-sliding doors operate smoothly with slow down to help prevent finger pinching even though there are the proper pinch sensors that will reverse the door operation if it senses an object in the way. 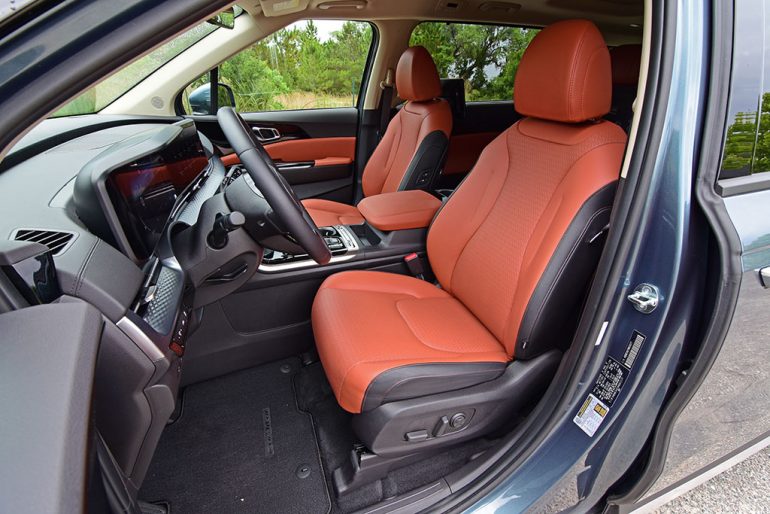 There’s a lot of deep thought put into the accommodations of the new Kia Carnival, where you will find the unique 2nd row VIP lounge seats that feature a power leg extension ottoman and reclining making the Carnival the most luxurious vehicle of its type around but with just a 7-passenger setup as you see in my test vehicle. The unique VIP lounge seats are exceptionally comfy with special adjustments that allow them to be slid far back or side-to-side to open a small aisle for access to the third row. However, the adjustments of the VIP 2nd row seats do not permit forward-sliding to access the third row, which you will have to opt for the 2nd-row bench seat for the easy forward slide feature in a full 8-passenger configuration. The third-row seating is also surprisingly accommodating where if you slide the second row far enough up you can easily get three adults in the back who are willing to take up residence for at least a couple hundred miles or so. Manually fold the third row down and the seats tuck down into the floor providing that flat cargo floor that you look for in a minivan. Fold them back up and you have deep floor space for extra cargo. 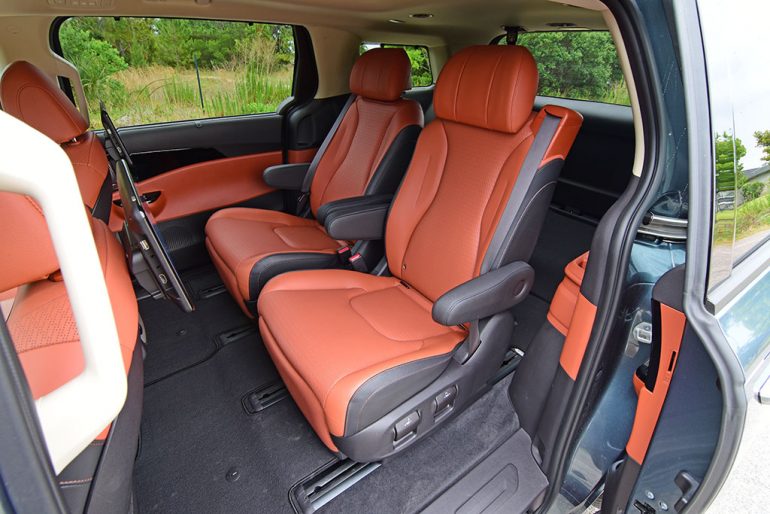 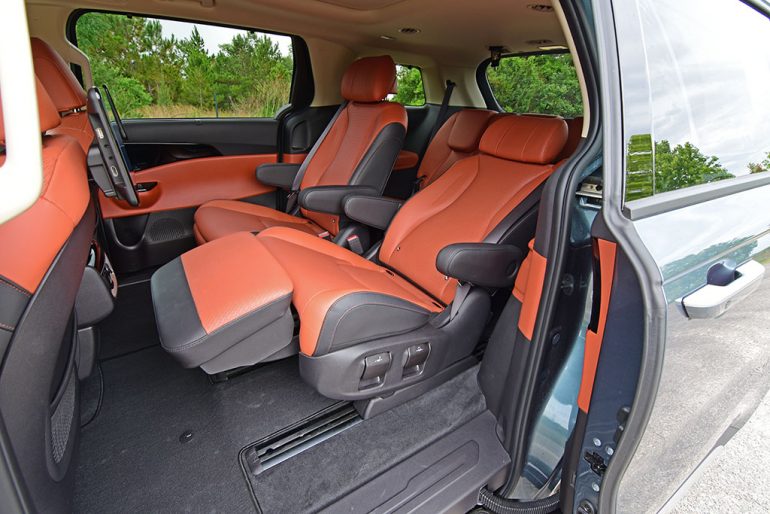 Other accommodations made available in the Kia Carnival are a plethora of USB connections along with just the right connections for the dual entertainment touchscreens mounted on the back of the front seats. The units both feature HDMI, USB, and audio ports and Bluetooth connectivity. As far as wireless goes, a WIFI hotspot was surprisingly missing from the Carnival but there was the welcomed addition of wireless Apple CarPlay and Android Auto with a wireless phone charger up front. Other highlights unique to the Kia Carnival in the SX Prestige trim was two separate power-sliding sunroofs with a manual shade, manual sunshades for both the second row and third-row side windows, 360-degree camera system, heating and ventilation in the second-row seats, and the unique looks from 19-inch darkened alloy wheels and an SUV-esq signature look that’s accented by thin-lined LED running lights and rear LED taillights. 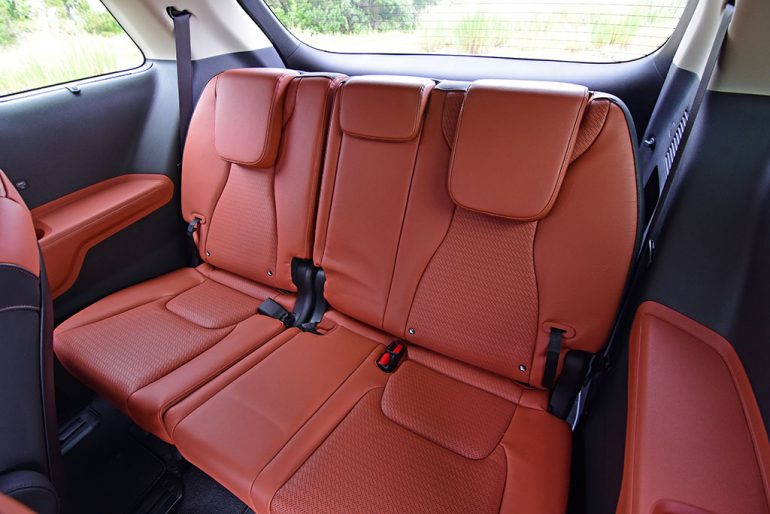 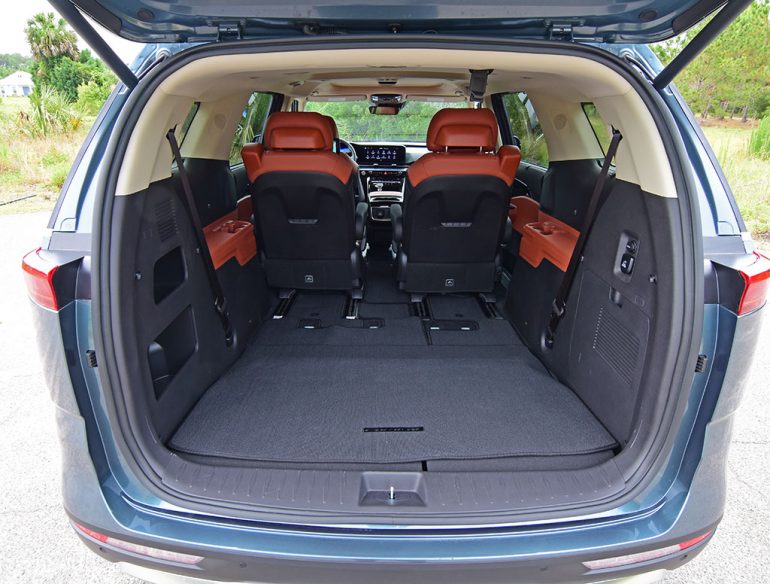 Kia left hardly any stones unturned for what a modern-day minivan, aheem – MPV, should offer and look like. Moreover, the Carnival is priced competitively in the landscape of not only minivans but alongside of crossovers and SUVs with the proper premium and near-luxury appeal for a few of those that clamor to vehicles that wear luxury badges. My loaded-up top-trim Kia Carnival SX Prestige tests out at a price of $47,770 but at the base level, a new Carnival can be had at a starting price of just $32,100 before any fees. Such a bargain deserves a Carnival celebration! 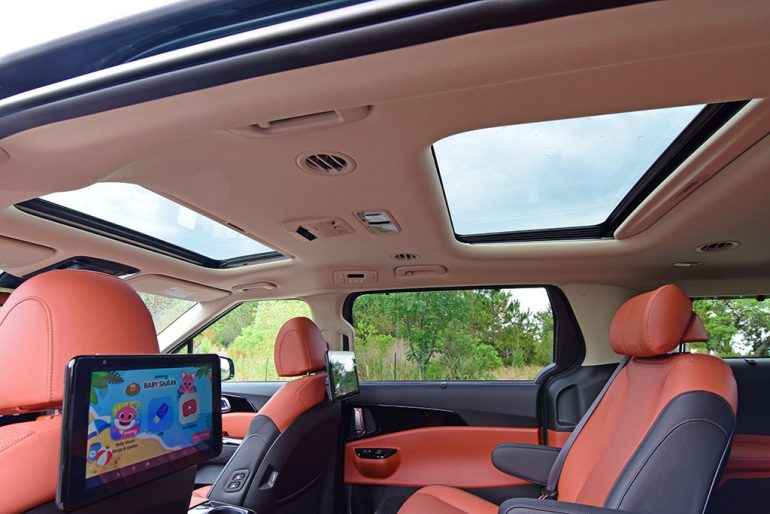