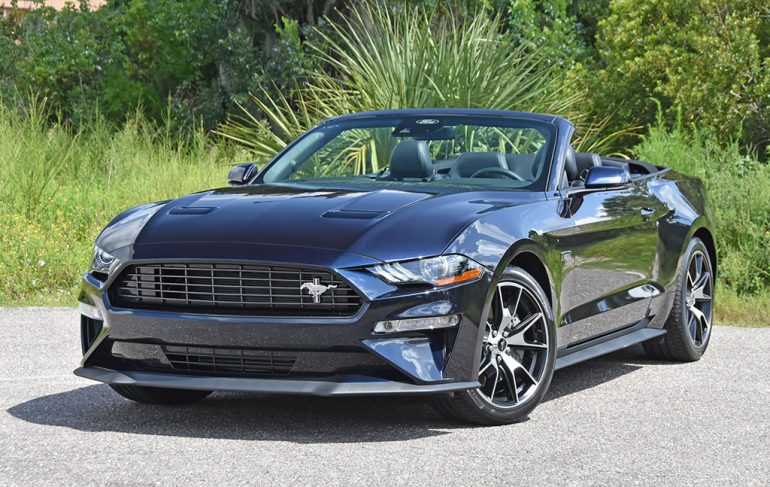 The Ford Mustang has fundamentally been the pony car that’s consistently stood the test of time, and in its latest iteration, it continues to be the staple that keeps the good times rolling in an affordable package that offers a wide array of worthy performance characteristics.

As one of the few coupes that get respectable sales numbers, the Ford Mustang musters on as a champion for an American pony car or refined sports car, all depending on which Mustang model you pick. At the base level, the Mustang EcoBoost is a surprisingly decent performer. Powered by a turbocharged 2.3-liter 4-cylinder engine the Mustang EcoBoost is good for 310 horsepower and 350 lb-ft of torque. In my new Mustang EcoBoost Convertible test vehicle with the High Performance Package (HPP), things get spiced up a bit with a little extra power totaling 330 ponies (and the same 350 lb-ft of torque), in addition to a few GT trim level goodies (Mustang GT brakes, performance tires, limited-slip differential, and aero). The extra oomph from the additional 20 horsepower feels more substantial than the EcoBoost without the HPP and makes it the most powerful 4-cylinder engine sports car currently offered. Additionally, each new Mustang EcoBoost HPP gets its own chassis numbered plate on the dashboard signifying something a little special. 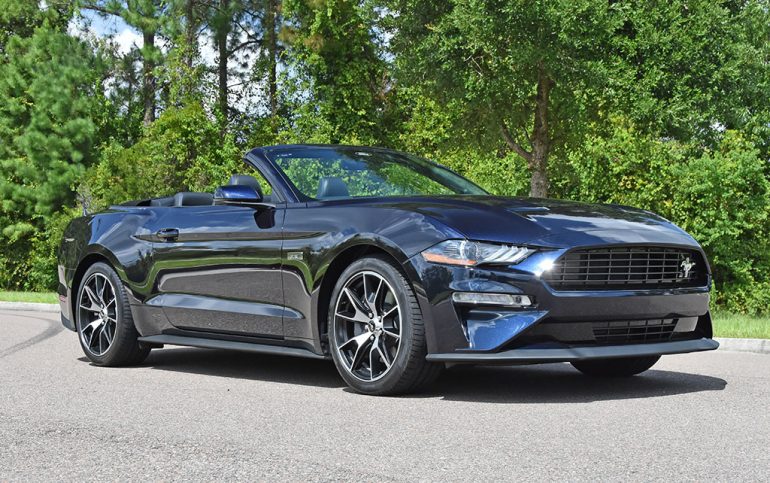 When opting for the Mustang EcoBoost, you’re not only getting a turbocharged pony car but one that’s a couple of hundred pounds lighter than its V8 siblings. Apart from that, the EcoBoost engine with a performance exhaust lets you know every time you start it up that it’s no normal EcoBoost mustang but one that has quad exhaust tips that emit somewhat of a harsh sound but to some the turbocharged 4-cylinder may sound menacing. To me, it’s rather dull and a little tasteless considering I’m used to hearing my Shelby GT350 rumble and scream all the way to 8,250 rpm. There’s a deep throttle growl from the performance exhaust that can be modified through four settings via the 12.3-inch driver’s gauge cluster screen and the pony menus. The quiet exhaust mode really keeps the sound level low while the other three settings, normal, sport, and track, all seem to have about the same level of loudness with only a subtle difference, which isn’t overly obnoxious on the highway but can be a bit much during a cold start if you don’t select the clever quiet start option. 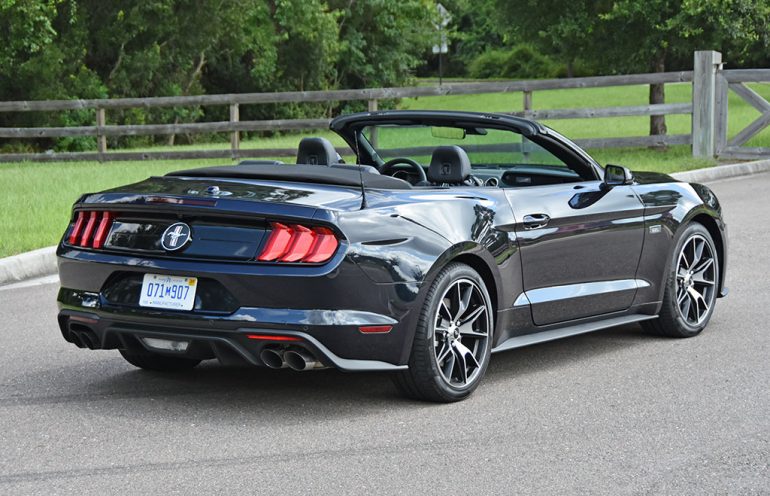 The way in which the Mustang EcoBoost HPP convertible drives is still customary to the overall feel of most Mustangs outside of the Mach 1 and Shelby, which is very muscle-car-like instead of a refined sports car. Handling is surprisingly good and hitting sharp bends and gradual turns is fun with assured grip from the 19-inch wheels and performance tires that are all squared up in their 255/40R-19 size. Zero to 60 mph ticks off in about 4.7 seconds, quite respectable for a convertible EcoBoost mustang. EPA-estimated fuel consumption figures are 20 mpg city and 28 mpg highway. 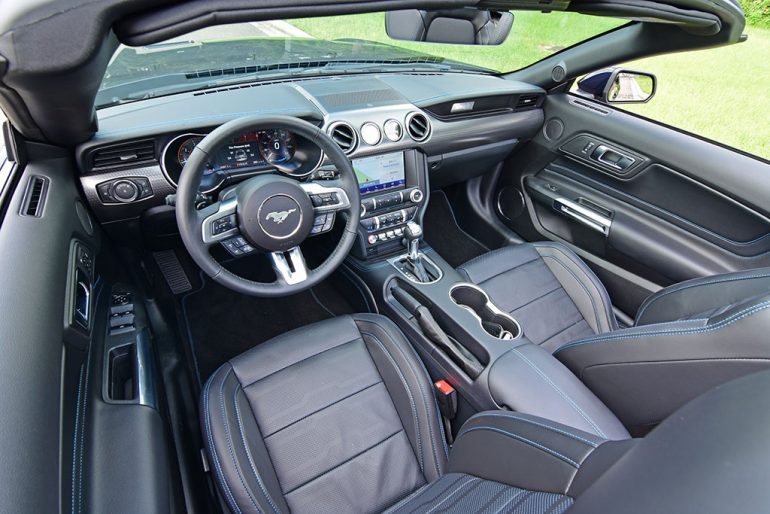 Letting the top down by manually unlatching it and then using the power-fold button is a simple and quick act that can only be performed when the vehicle is stationary. The ventilated and heated seats are welcomed for those top-down adventures to aid in keeping your body at the right temperature to either battle our humid Florida heat or to warm up your backside on those cooler nights. 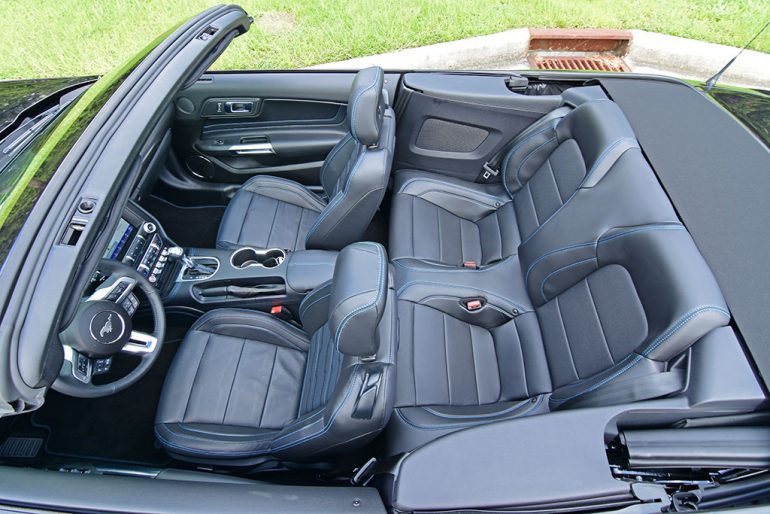 Interior space is accommodating up front but in the back, two passengers will only want to remain in place for a very short trip as there’s not much room to spread out. If you’re anywhere near 6 feet tall don’t even attempt to jump in the back unless you plan on keeping the top down and planting your knees in the rear of the front seats. 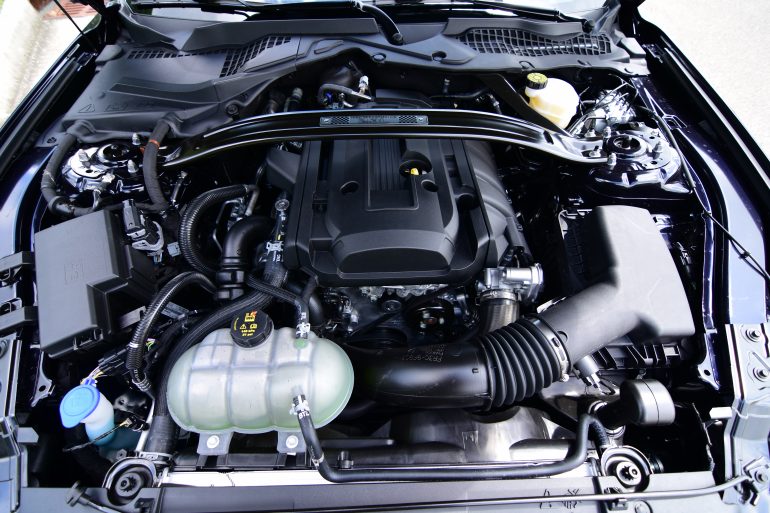 While many aspects of the new Ford Mustang EcoBoost have been covered to death, there’s something to be said about the uniqueness of the Stang and its overall appeal to a wide demographic, in addition to offering the choice of a 6-speed manual transmission or the 10-speed automatic found in my EcoBoost HPP Convertible test vehicle. I will say, having the 10-speed automatic is enjoyable up until the transmission starts to up-shift abruptly through the gears with lumpy forward leaps that are not conducive to improving performance. What I am trying to say is the 10-speed automatic is clunky at times and could use some re-tuning from its control unit to smooth things out a bit.

As far as styling goes, the Mustang is unmistakable and garners a few head turns depending on the exterior color, choice of wheels, and the subtle contrasting accents, which are somewhat replicated in the accented stitching throughout the soft-touch dashboard, door trim, center tunnel, and armrest. The Sync 3 infotainment system and its 8-inch touchscreen function well with a good response time from inputs. Apple CarPlay and Android Auto are also welcomed integrations with a connection through one of the two USB ports to your phone. 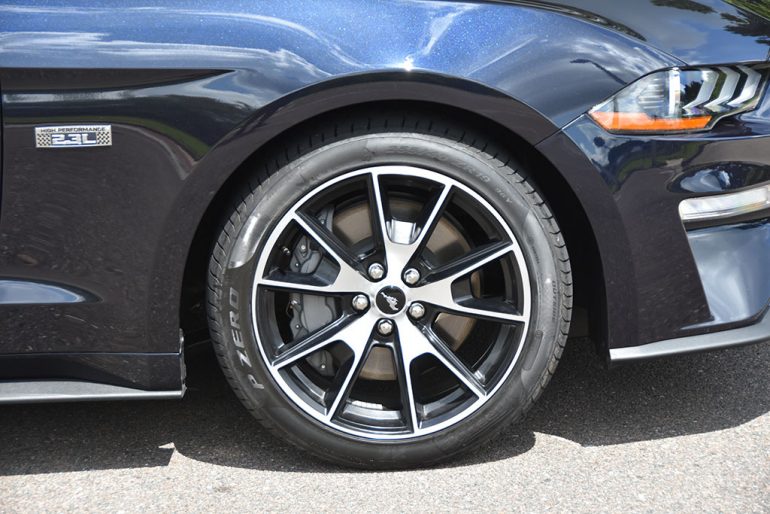 The price of admission is an area where other sports coupes and drop tops simply cannot touch, starting at a price of $27,205 for the base EcoBoost Mustang Coupe and about $37,725 for the EcoBoost Premium Convertible. Loading up my test vehicle with the High Performance Package the price comes to $50,160, which may be a bit much but you still must consider all of the expected active safety features, convertible top, and respected performance out of an efficient turbocharged 4-cylinder engine.