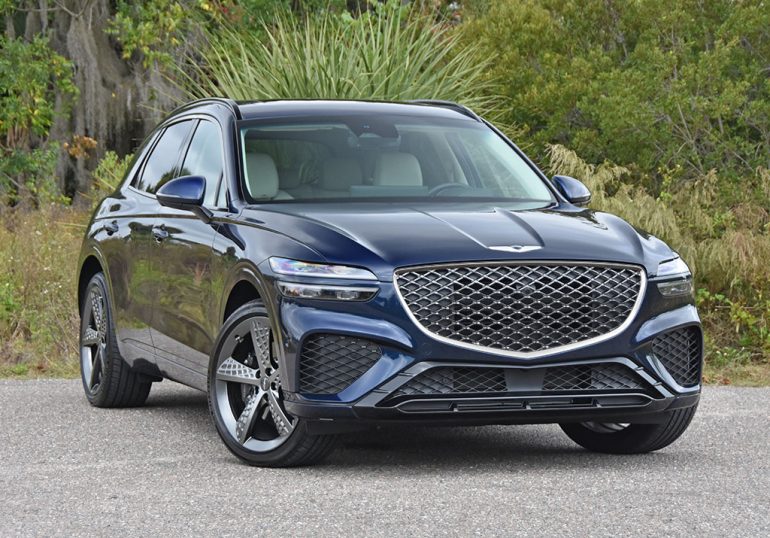 There are rare instances that I get a vehicle in for review and just after a few minutes of sitting in the driver’s seat, you know that it’s going to be a winner. This week, the winner in my book is the all-new 2022 Genesis GV70 in its top-level AWD 3.5T Sport Prestige trim.

The Genesis GV70 is something all-new from the luxury brand that’s had much success in rolling out their recent SUVs, something that is better late than never. As a new player to the game, Genesis has come out of the gates throwing proverbial punches causing many eyebrows to raise from the crowded audience of those to look to make a new luxury or premium crossover utility vehicle their next big purchase. The new GV70 embodies exactly what people want in a compact-sized crossover that has a respected and unique take on luxury, style, and performance. 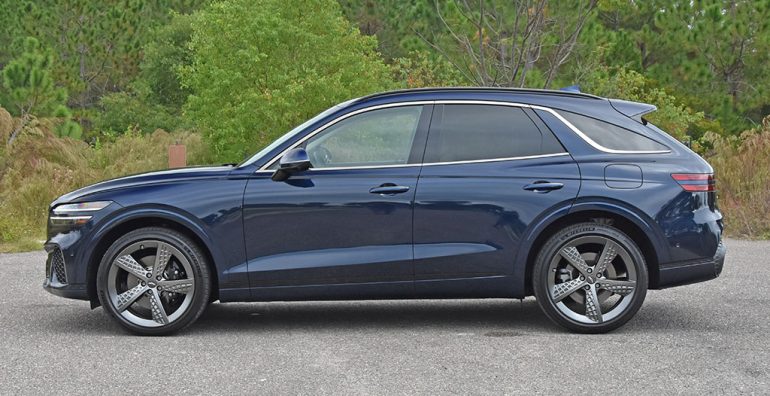 All of the stops were pulled in the new Genesis GV70 where it not only captivates onlookers with head turns and head-scratching ganders wondering if Bentley just introduced a new smaller SUV. No, it’s not a Bentley, but it could almost pass for one in many ways. 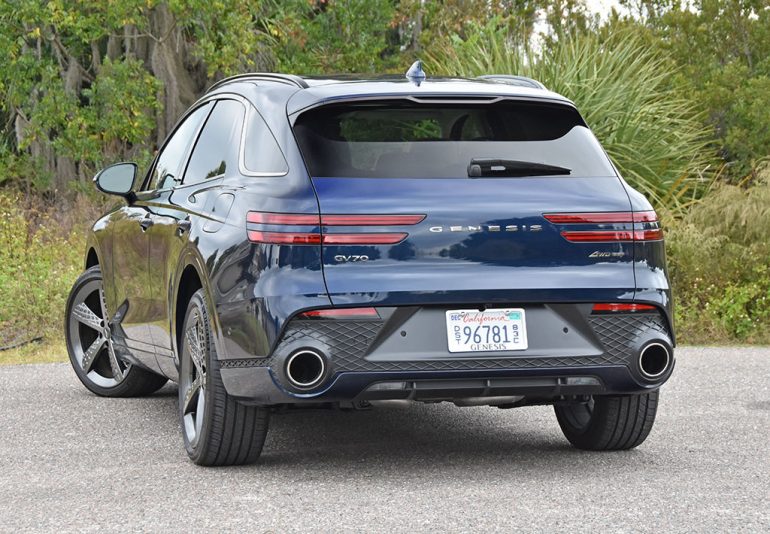 The new rear-wheel-drive architecture that can only be had in an all-wheel-drive setup combined with a nicely balanced chassis, are foundational principles that make the GV70 so enjoyable out on the road where it is powered by a rather potent 3.5-liter twin-turbo V6 engine with 375 horsepower and 391 lb-ft of torque. That power is sent through a smooth-shifting and often direct-feeling 8-speed automatic transmission. An all-wheel-drive system comes as standard for the GV70 even with the base 2.5T trim’s less-powerful 300-horsepower turbocharged 4-cylinder engine. 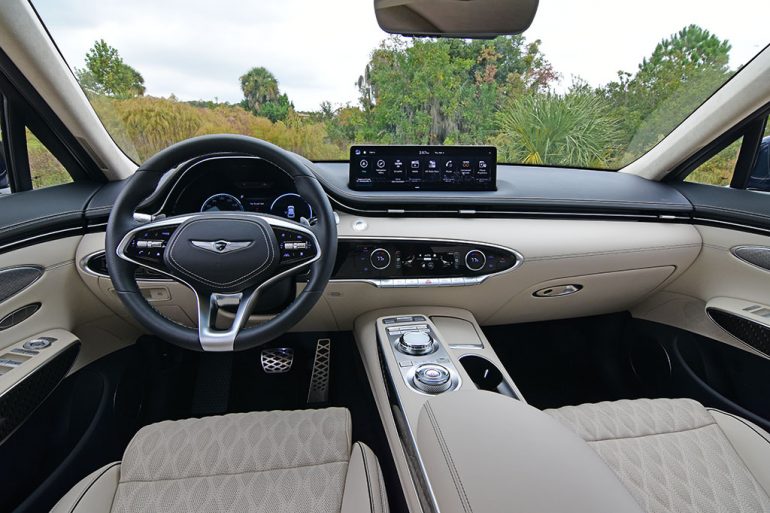 Piloting the new GV70 with the twin-turbo V6 is rather enjoyable both for luxurious travel and spirited driving. There appears to be a couple of different attitudes from the GV70 dialed in through the drive modes as a Sport+ mode livens up things to take full advantage of all that the forced-induction V6 has to offer with a chassis that isn’t afraid to be tossed around. The adaptive dampers set the proper mood and aid in handling and respected ride comfort when you leave the drive mode in the default normal position. The large 21-inch wheels and tires don’t add too much harshness to the ride quality but help keep the GV70 firmly planted to assure the driver of what the compact-sized crossover is capable of, which is much more than what you would throw at it on public roads. The GV70 feels at home on back twisty roads but for obvious reasons, despite having strong brakes with 4-piston front calipers and single-piston rears, is not going to be a choice for track sessions. 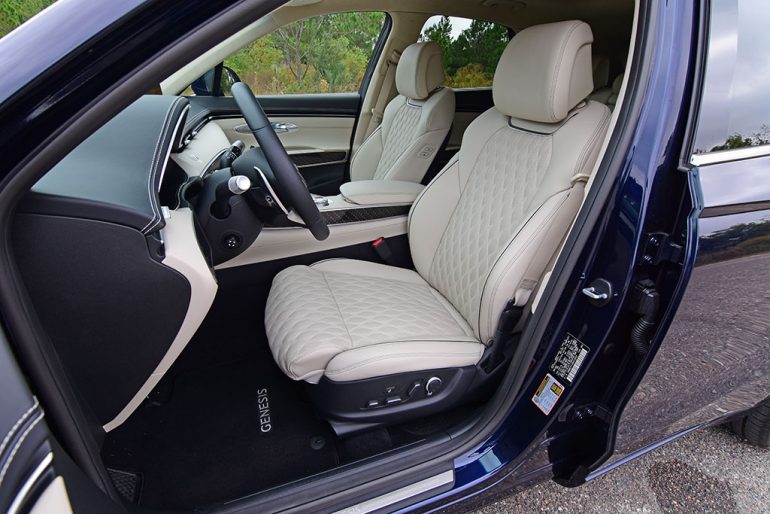 There’s a slight hint of turbo lag out of the hole from a stop but power comes on quick enough to get the GV70 up to 60 mph in about 4.5 seconds, which makes it quite the performer. Overall, the GV70 feels more car-like than SUV and has proven to be an esteemed competitor in its segment. The only issue I have with the performance is the fuel consumption, which is not quite what I thought it would be where I was only able to muster 23.1 mpg on the highway. Consumption on the Interstate during a 250-mile journey, driving around 75 mph, was well short of the EPA highway figure of 25 mpg. The EPA city mileage is 19 mpg and combined is 21 mpg. 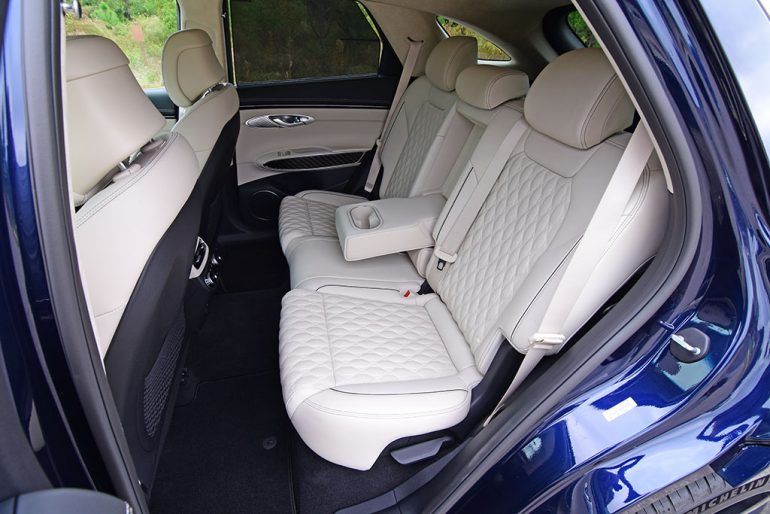 Comfort in the GV70 is bolstered by the luxury features and premium materials found throughout the cabin. There’s a welcomed level of luxury where attention to detail was elevated to provide many soft-touch surfaces, even as much attention to make the lower door trim soft-touch as well – something you don’t even find in some luxury vehicles. Seating areas have just the right amount of space and the forward and rearward adjustments of the front seats are vast allowing you to virtually stretch out your legs. The seats are somewhat on the firm side but thanks to a driver’s Ergo Motion Seat that has a massaging feature, and a clever smart poster assist feature that automatically activates after 30 to 45 minutes of driving. When the smart poster assist function activates, pressure points on your back and lumbar are relieved and you feel rejuvenated. Pair the massaging with heating or ventilation and 16-way power adjustments, and you’re golden on a long drive. Unfortunately, the front passenger seat doesn’t get the Ergo Motion Seat features and they are left with fewer power adjustments having just a 12-way power adjusting setup. This oversight is one of my few complaints of the GV70 apart from the smallish back seating area. The rear seatback reclining, heated outboard rear seats, and decently sized cargo area (28.9 cubic feet with rear seatbacks up) accessed through a power hands-free liftgate makes up for the smallish back seats. 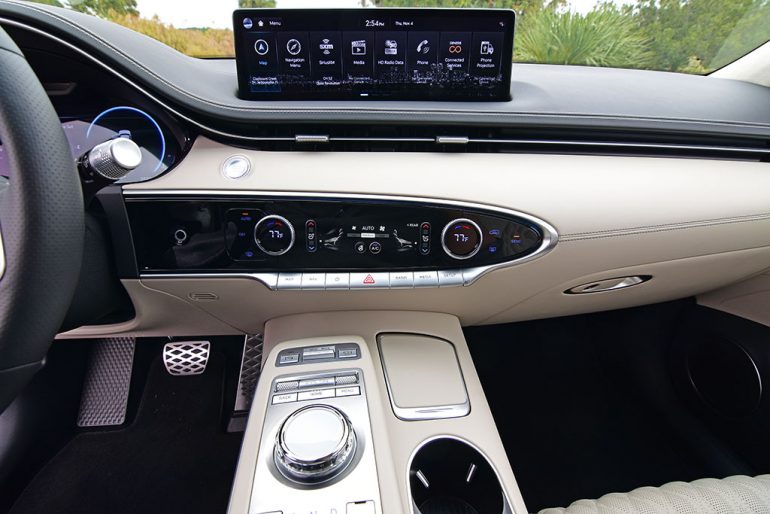 In the area of tech, the GV70 exudes forward-thinking and clever adaptation of a new Highway Driving Assist 2 system that combines adaptive cruise control and its lane-keeping system to virtually pilot the vehicle autonomously on the highway. The system is not nearly as advanced as many hands-off cruise systems, but it does elevate the autonomy to use machine learning to mimic your driving style. In all, the system proves to be rather smooth in its braking and acceleration transitions in situations where approaching vehicles are detected and ones where you enact an autonomous lane change. The system does however require that you keep your hand(s) on the wheel to utilize the system’s advanced features and autonomy. There’s also the full array of expected active safety features to aid in keeping your smooth or exhilarating drive safe. 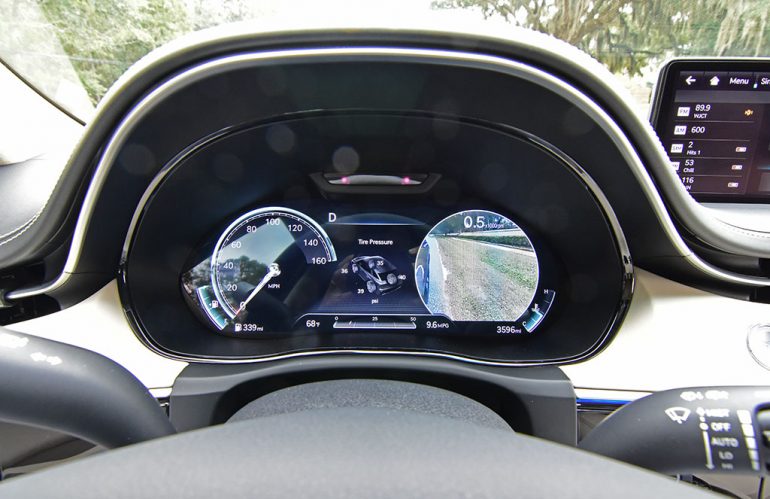 The infotainment system in the GV70 is one of those things that is almost perfect but hindered by something silly. In this case, the GV70’s bright and wide touchscreen is a bit too far for an easy reach often leaving you wanting to interact with the system through a knob that also acts as a touchpad. The knob is more user-friendly than the flush-mounted knurled circle that can be slippery and cumbersome found in the larger GV80. However, like the GV80, the GV70’s menus may take a while to get used to for most as there is a slight learning curve. Otherwise, the GV70’s use of a 3D digital gauge cluster looks very premium just as it does in the GV80 that I reviewed a few weeks back. The gear shifter is the same as the GV80s, featuring a knurled glass rotary knob. 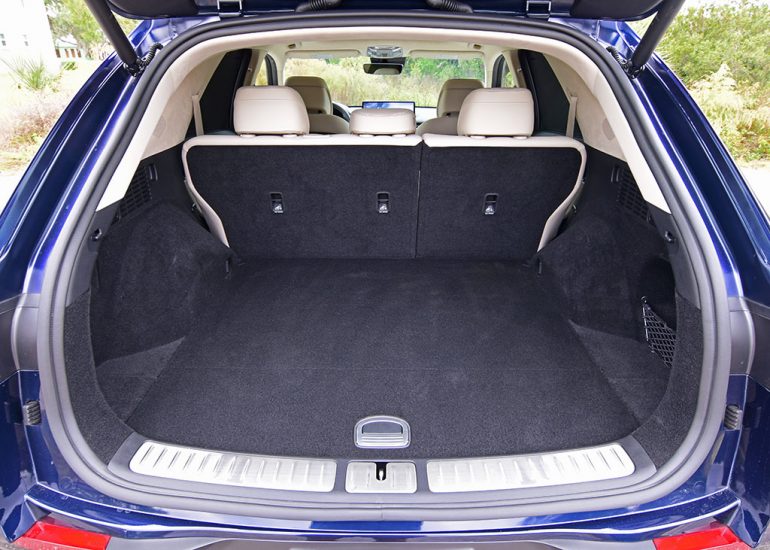 The use of a haptic-feedback touchscreen for the 3-zone climate control system along with two knobs for temperature control is quite clever. There’s also a set of physical buttons for some of the main features of the infotainment and Lexicon audio system, which sounds excellent through a setup of 16 speakers.

One area where the GV70 attempts to set itself apart is through features like the blind-spot view monitor that gives you a live camera feed image displayed on the digital gauge cluster when you enact a signal, in addition to a fingerprint reader that can bring up a driver’s preferences and memory seat settings along with serving as a digital key to start the vehicle without your keyfob. There’s also the ability to use your phone as a key or carry a credit card-sized key card. 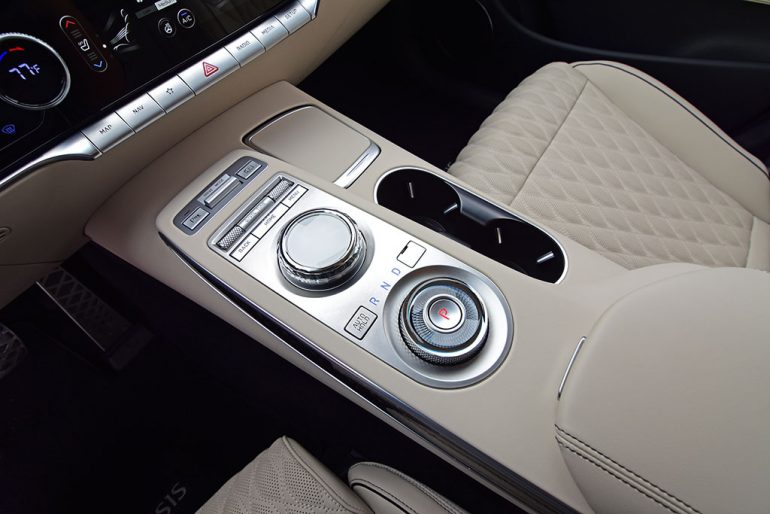 The new Genesis GV70 is well-deserving of many accolades and awards this year as the luxury outfit for Hyundai has knocked this one out of the park. No wonder Motor Trend picked the GV70 as its SUV of the Year! The price tag undercuts its competition with room to spare, the performance is excellent, the luxury appointments are strong, and the styling is unique and fresh to garner luxury owners to gawk at its elegance long enough to think you’re driving something that costs double the as-tested price of $64,045 of my loaded test vehicle. Also, the new GV70 in its base form with the 300-hp engine starts at just $41,000 before any fees. The GV70 is a clear winner, in my book.