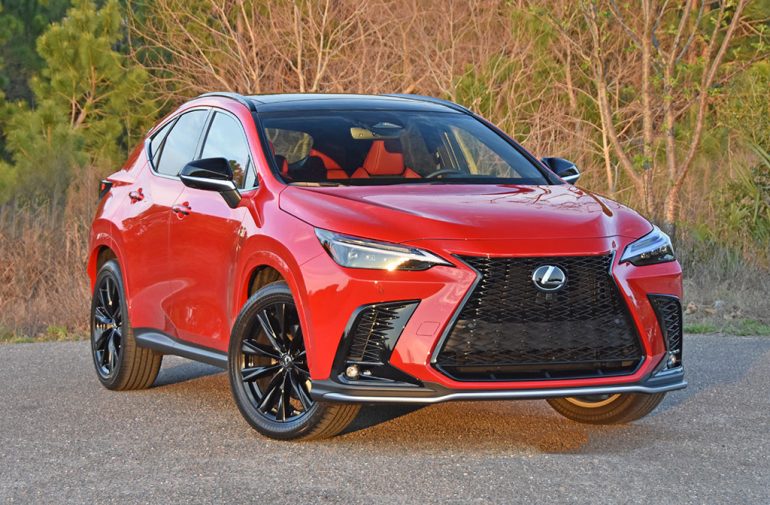 The SUV segment is making new strides with innovation as they continue to see record sales over the traditional sedan for both mainstream and luxury vehicles. Lexus has recognized such and improved upon the formula of their compact-sized NX for the 2022 model year receiving a full redesign but retaining a classy yet somewhat bold style that’s worked for the brand since the NX’s introduction in 2015.

For the second-generation Lexus NX, there are several trims to choose from starting with the NX 250 and moving to the NX 350, NX 350h hybrid, and an NX 450h+ plug-in hybrid. For a bold statement, I get the 2022 Lexus NX 350 F Sport for a week, and I’ve walked away thoroughly impressed despite the compact size of the new NX. 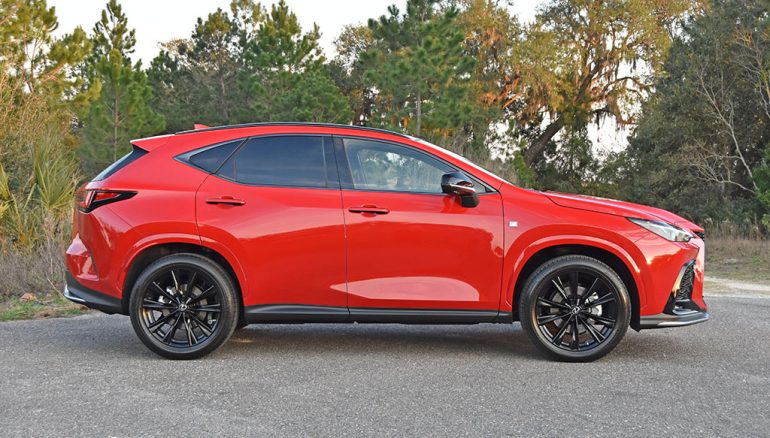 The 2022 Lexus NX retains a bold design but takes it up a level for a classier feel and look and an option to make things somewhat sportier in the NX 350 F Sport trim of my test vehicle. Adorned in an eye-popping Redline exterior paint, my new Lexus NX 350 F Sport has stunning looks with the darkened 20-inch wheels that fill the wheel wells and the proper black accents and black spindle grille that all fit the Lexus theme of sporty luxury. There’s an updated look but most of what was liked about the first-generation NX is carried over in subtle ways but bolstered by futuristic-looking updates like the new LED taillights with a taillight bar that runs the width of the rear accented by new brand letters “LEXUS” spelled out instead of the old traditional “L” badge. The “LEXUS” letter badging across the rear is a change that will be across the full lineup of Lexus vehicles soon. The front is still clearly recognizable as a Lexus and there’s new updated LED headlight housings with cornering lamps and auto high-beams that flow into the large spindle grille and accented lower chin spoiler for the F Sport trim. 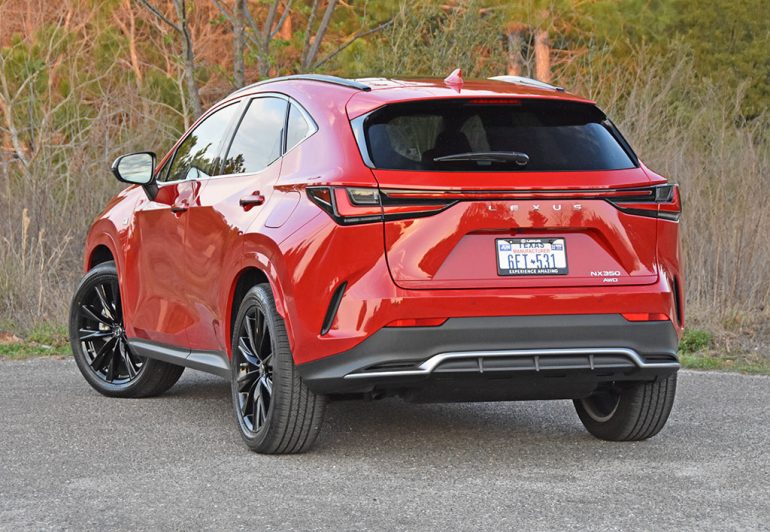 Not only did Lexus captivate with the exterior of the new NX but under the aluminum hood, there’s a new engine for the NX 350, a 2.4-liter turbocharged 4-cylinder good for 275 horsepower and 317 lb-ft of torque. The engine is paired with an 8-speed automatic transmission that shifts smoothly and just quick enough to keep you somewhat entertained when you’re pushing the NX. Getting into the throttle the NX 350 F Sport moves along well and hits 60 mph from a stop in about 6.6 seconds and there’s a welcomed solid feel to the way the NX 350 handles but seems to be not as lively or spirited as BMW crossovers. Overall, the suspension is nicely tuned with adaptive dampers that only subtly firm up in the Sport S+ drive mode or configurable damper Sport setting in the Custom drive mode. The braking feel is assured and the sound from the 4-cylinder turbocharged engine when it spins near its redline is somewhat subdued through clever sound deadening. There’s also a very solid feel for the chassis of the NX 350 but nothing about the NX departs from what is expected out of a Lexus where much is kept in check and never overdone. On occasion, the NX 350 F Sport rides like a much larger SUV possibly due to the adaptive dampers attempting to smooth things out coupled with the large 20-inch wheels. 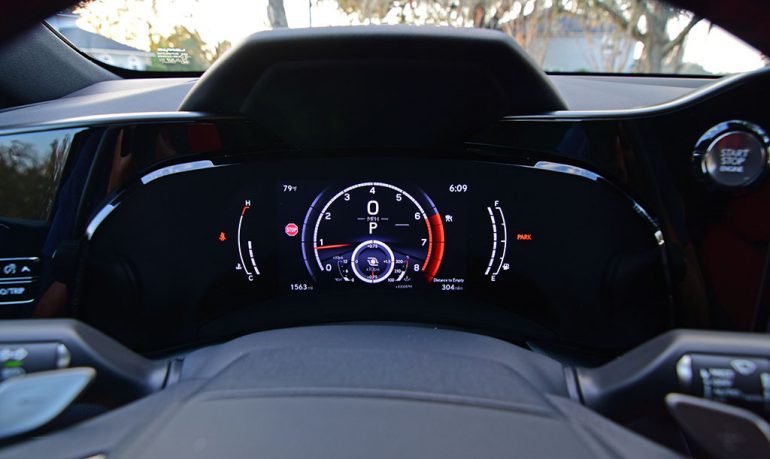 Fuel consumption remains mostly the same as the outgoing generation, but you must be mindful that the NX 350’s new engine produces a lot more power than the outgoing model. The EPA estimates fuel economy at 22 mpg city, 28 mpg highway, and 25 mpg combined. I saw a steady average of 26.4 mpg with a near 50/50 mix of city and highway driving. 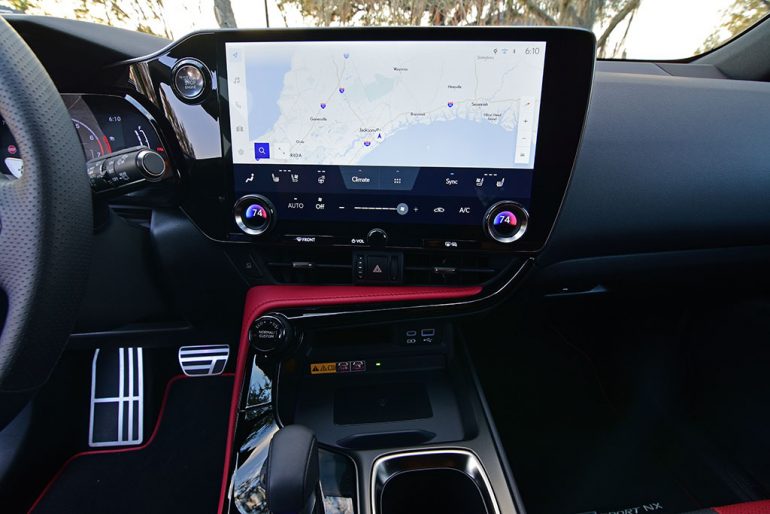 Probably the most praised update for the new 2022 Lexus NX is the interior and the welcomed new infotainment system that gets either a standard 9.8-inch touchscreen or a larger 14-inch touchscreen that completely ditches the cumbersome and annoying touchpad interface. The move to the touchscreen is a huge leap and will impress new buyers into the Lexus brand as the system starts to migrate to other vehicles in the Lexus lineup. With the NX being among the first to get the updated infotainment system and the availability of the 14-inch touchscreen, there’s a lot to take in that’s encapsulated in a rather simplistic system with many hidden features. The high-tech feel of the system along with a fully digital instrument cluster for the driver makes for a welcoming feel that brings Lexus up-to-date and on par with the competition, finally. 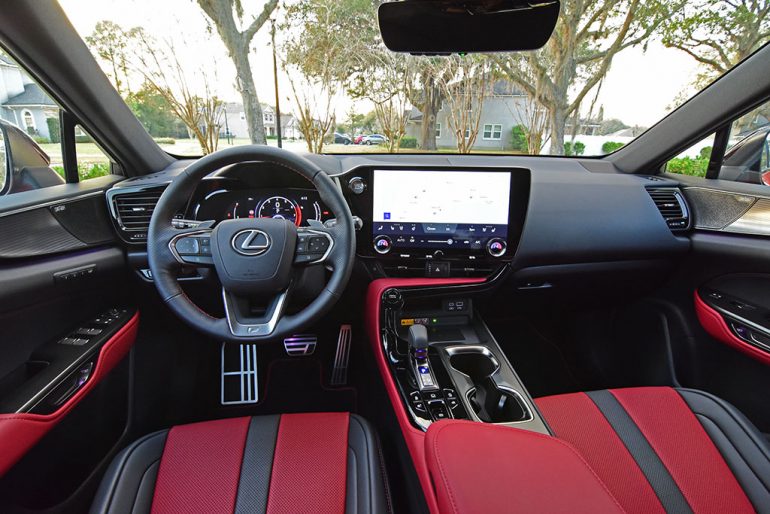 I found the infotainment unit to have a short learning curve but lacked the ability to customize screens to take full advantage of the large screen real-estate. Fundamentally, using certain core functions only displayed one core system at a time where you could not couple the cloud-based navigation screen with the delightful-sounding audio system, you could only display one at a time. Otherwise, the system is a welcomed change in the right direction, and the addition of a natural language recognition system that is prompted by simply saying “Hey Lexus,” adds to the futuristic appeal. Also, there’s wireless Apple CarPlay and Android Auto that can also be paired using a USB connection, it’s your choice. 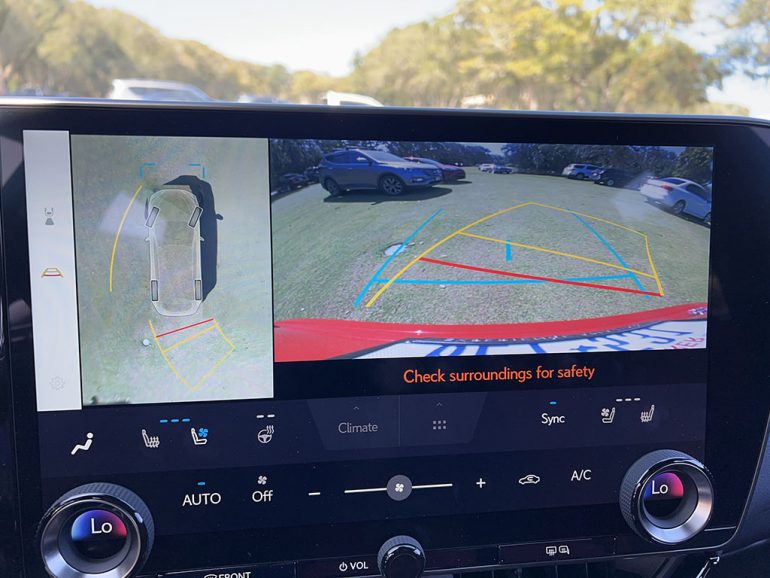 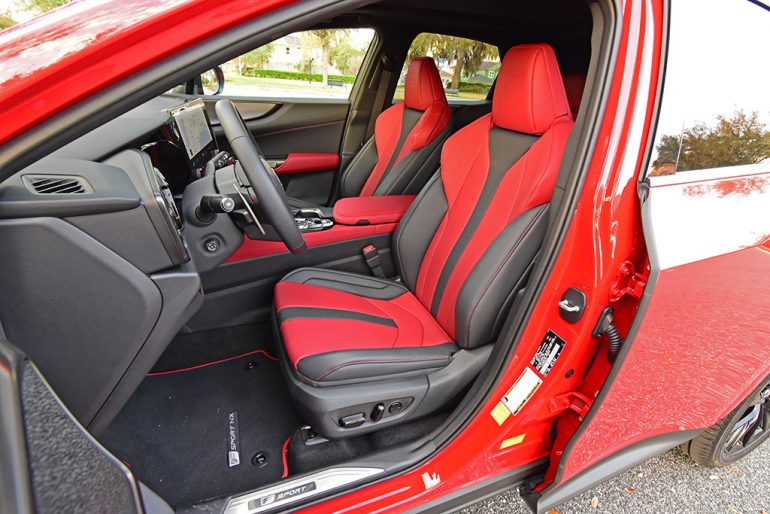 Other highlights of the interior include several soft-touch and accented dashboard surfaces, the sporty red perforated leather seats up front that are heated and ventilated, thematic ambient LED interior lighting, a 17-speaker Mark Levinson audio system, color heads-up display, panoramic moonroof with power sunshade, and new electronic/digital door handles/latches that open with a button press but each door has an integrated latch-pull in case of an emergency when the electronic latches do not work, or power fails. There’s also the mention of the steering wheel buttons having a clever touch-sensor that indicates your finger resting on a certain function displayed in the color heads-up display so you don’t have to look down to see which function your finger is about to depress. 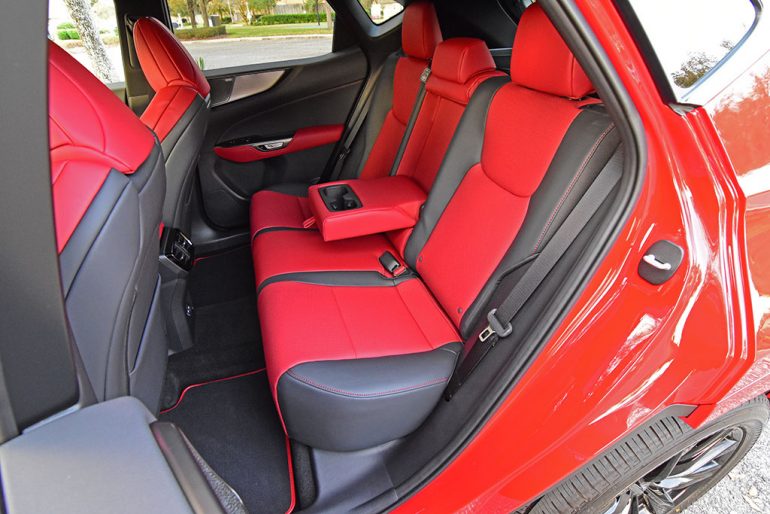 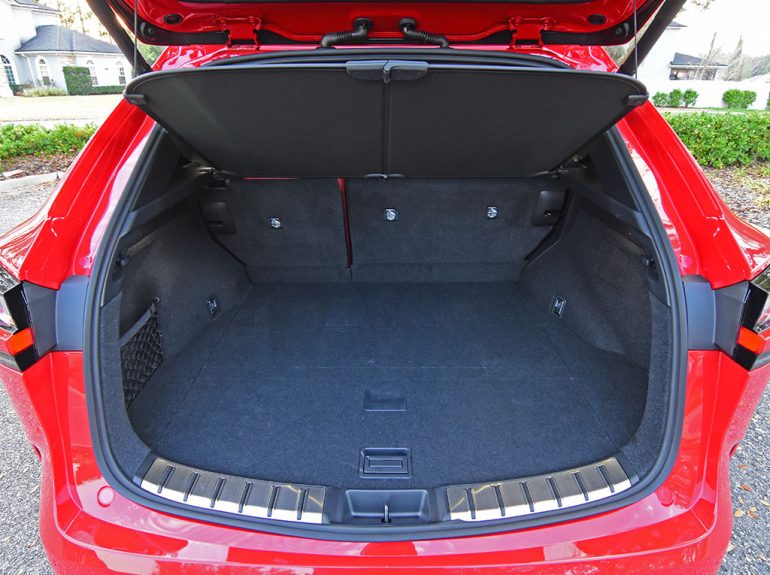 Lexus went the distance to make their new NX stand out in more ways than one. No longer can you group Lexus SUVs into a vanilla or mundane transportation appliance for the suburbs, at least not the new 2022 NX with the F Sport treatment. There’s a lot to take in for such a small vehicle, which is also surprisingly accommodating even for someone who’s just over 6-feet tall such as myself. I can even fit into the back outboard seating areas. 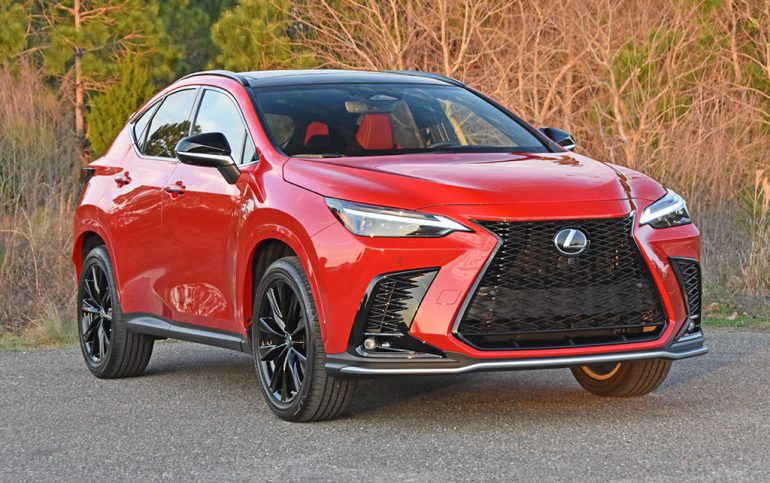 I can feel good about recommending the Lexus NX 350 F Sport over other compact luxury crossovers considering how much is bundled up in a smallish package with an expected high level of proven quality and reliability at the as-tested price of $54,915. At the base level, with a less-powerful 205-horsepower engine, the Lexus NX 250 starts at $39,025 before any options or fees, which is quite the value for a welcomed fresh new take on Lexus compact SUV luxury.