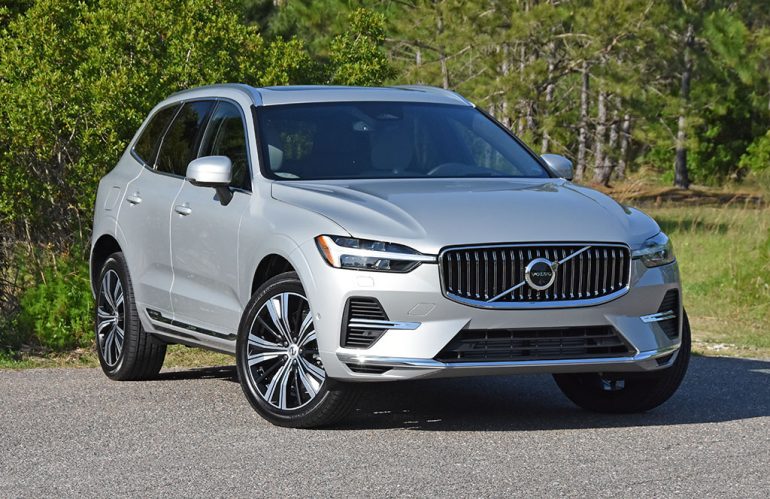 Many vehicle manufacturers, such as Volvo, have set aggressive goals to electrify their entire lineup within just a few years. As a serious step toward a full electric vehicle (EV) future, vehicles like the new Volvo XC60 T8 Recharge plug-in hybrid are perfect gateways to their EV future, which I was able to check out this week walking away mostly impressed.

The new 2022 Volvo XC60 comes in a variety of trim levels with different powertrains, all being all-wheel-drive. While the new primary powertrains of the revised trim levels replacing the T5 and T6 trims with B5 and B6 now feature mild-hybrid technology, the top-level XC60 T8 Recharge takes things to another level with a new extended-range vehicle that touts additional power over the outgoing recharge plug-in hybrid now having 455 horsepower and 523 lb-ft of torque. 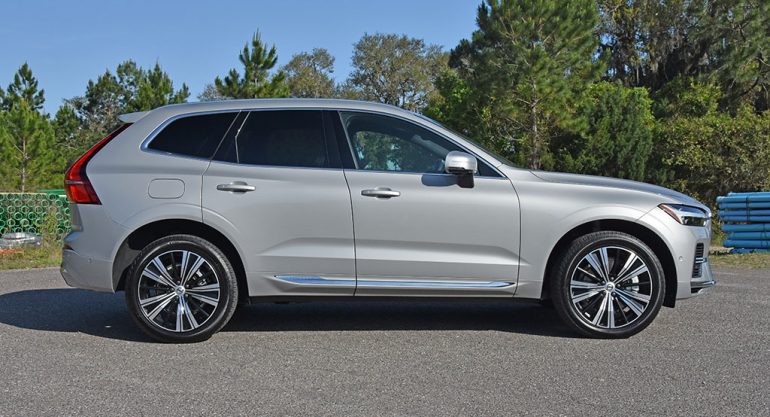 The new robust electric motor is now more powerful touting 143 horsepower, which is a big improvement over the outgoing plug-in hybrid’s 87 horsepower. That extra power is enjoyed when you are utilizing the Pure electric drive mode or Hybrid mode where the sophisticated hybrid system will utilize the battery power first and fire up the gas engine only when extra power is demanded. When in the Pure electric mode, the vehicle will not use the gas engine unless you stomp on the gas through the kick-down. Using the electric motor around town is sufficient for power and surprisingly zippy with the substantial instant torque of the electric motor. 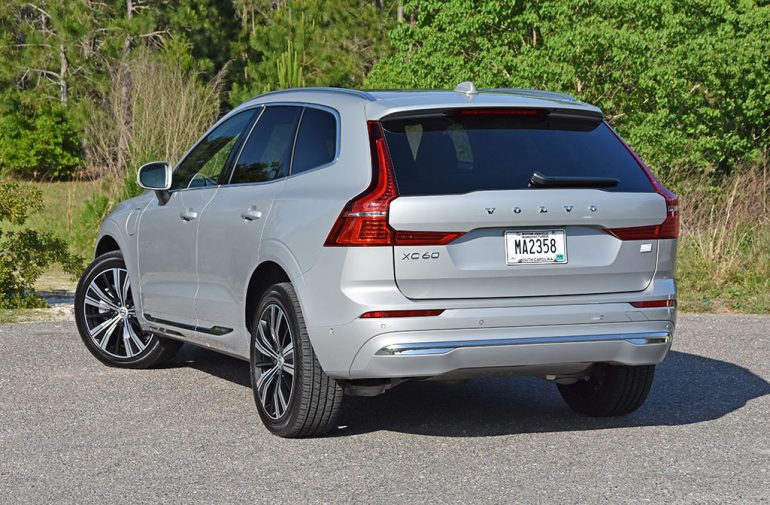 The gas engine is no longer both supercharged and turbocharged. It’s now a turbocharged 2.0-liter 4-cylinder paired with an 8-speed automatic transmission, which by itself produces 312 horsepower and 295 lb-ft of torque. When the system is working in sync with the gas engine and electric motor spinning its hardest, you’ll expect the XC60 to hit 60 mph in just 4.5 seconds. The midrange of power is very strong having 523 lb-ft of torque and at times it really plants you in your seat. The only fault I find with the drivetrain is some power delivery inconsistencies at times where the system doesn’t feel as strong as it does in the Hybrid mode with a depleted battery. That may sound strange but I believe it comes down to the hybrid system prioritizing efficiency when using the left-over battery power that you either plugged up to charge or allowed the vehicle’s engine to charge where it may use up a bit more fuel. The other inconsistency is upon acceleration where if you demand moderate to full throttle there is a split second of the vehicle feeling powerless followed up by an explosion of power. Some of these are relatively minor gripes but in full disclosure, the XC60 T8 Recharge is a beast when it wants to be. 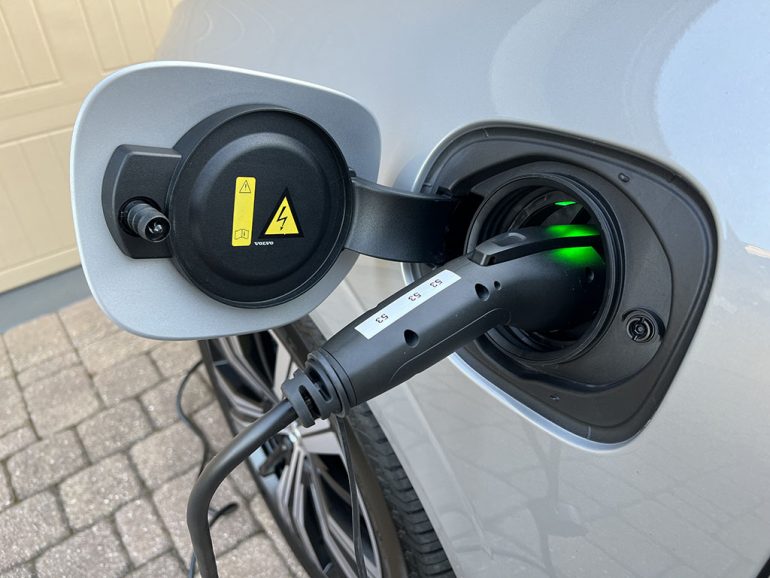 There’s a conscious effort for driving a plug-in hybrid where you may make it a point to charge overnight from your standard 110-volt outlet and get the full charge by morning for your daily commute that may never require a drop of fuel. Overall, the new Volvo XC60 T8 Recharge is quite efficient and the hybrid system does well for power management and displays a clear indication of how much throttle you can give the vehicle without using gas. There’s also a clever B drive that virtually enables one-pedal driving where letting off the gas adds a substantial amount of regenerative braking that recharges the battery at a good clip. Also, one thing to note when driving in Pure electric is there is no noticeable deceleration from the powertrain. There is a mild bit of regenerative braking in the Hybrid drive mode as there is in the Power, Constant AWD, and Off-road modes. 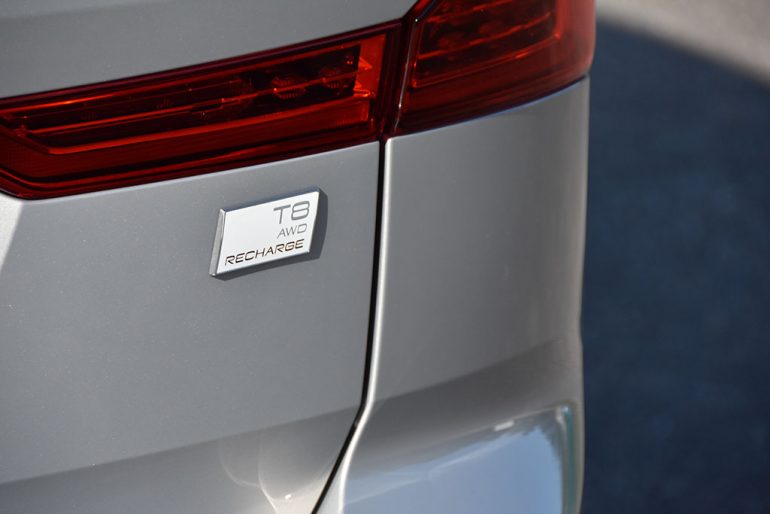 Volvo has switched up the way the vehicle’s settings are presented where there’s a lot of automation when selecting a drive mode, which must be done through the infotainment system’s settings menu. Even the air suspension system’s settings are grouped with each drive mode instead of any manual controls. Speaking of air suspension, the Volvo XC60 T8 Recharge’s ride is among the smoothest and most compliant in its class. In fact, the suspension system manages to mitigate road imperfections better than many luxury vehicles currently on the market, which is a nice surprise for the compact size classification of the XC60. The Volvo XC60 T8 Recharge is able to tow 3,500 pounds.

Volvo does things a little different from most and it pays off well for a unique cabin that has a unique attention to detail. There is a minimalistic approach to things inside the XC60 T8 Recharge. The portrait orientation of the center 9-inch touchscreen is special in the operation of such a screen that doesn’t quite use its real estate as clever as I would hope for things like the backup camera and its 360-degree function. Basically, you cannot view both the rear and 360-degree view at the same time – you must choose only one view at a time. Also, the display seems to waste space with functions with only a small sliver to display alternative information apart from a fixed area at the bottom for the climate control, camera, apps, and settings button area. Otherwise, you’re only left with the physical controls of a large volume knob, play/pause button, track/station seek buttons, front/rear defrost, and hazard lights. 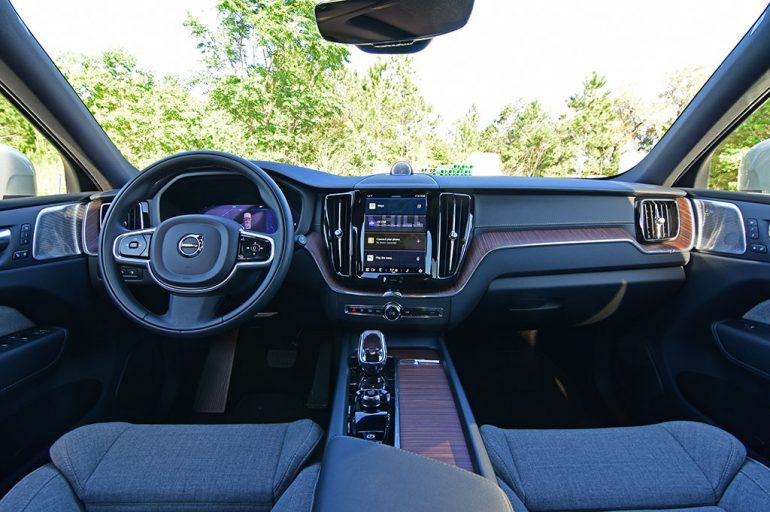 The one upsetting issue with the new XC60 T8 Recharge, which may have been limited to my test vehicle, is the software update failing to apply and several software glitches for the audio system’s station display not reading correctly leaving me to guess which station was selected. I suppose making up for the hiccup was the awesome-sounding Bowers & Wilkins audio system. 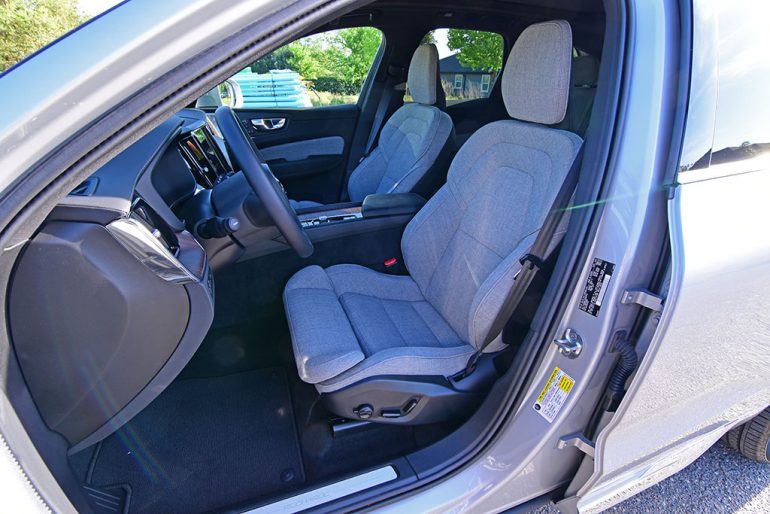 The interior’s minimalistic approach keeps things tidy, but the confusing aspects remain throughout the infotainment system, which if you spend enough time with (we’re talking hours) you may learn to enjoy its operation. The updated unit now revolves around Google, so you get all of the benefits of Google’s voice interaction along with a Google Play Store focus. There’s also Apple CarPlay and Android Auto integration, which never came up for me on the test vehicle via USB connection to my iPhone 13 Pro – strange. 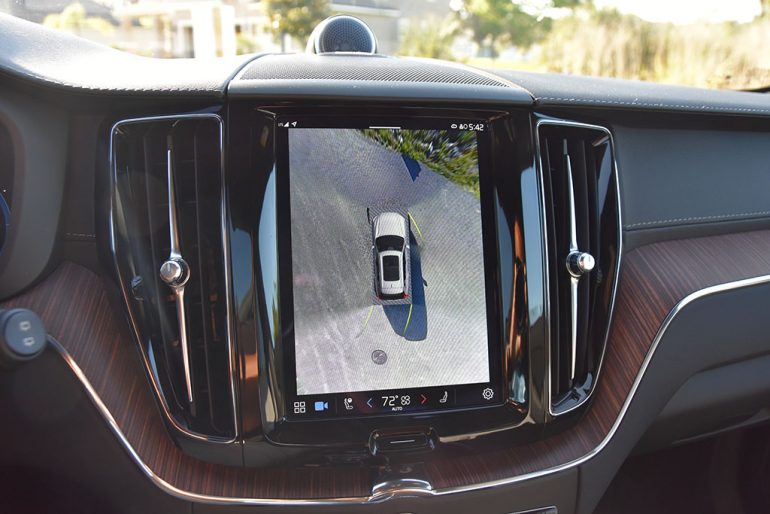 There’s an updated 12.3-inch digital gauge cluster that displays a large map. The highly-adjustable front seats are quite unique in my test vehicle being a new wool fabric that still have heating but no ventilation. The fixed headrests return in customary Volvo form. The rear seating area has a good amount of space and heating for the outboard seats. 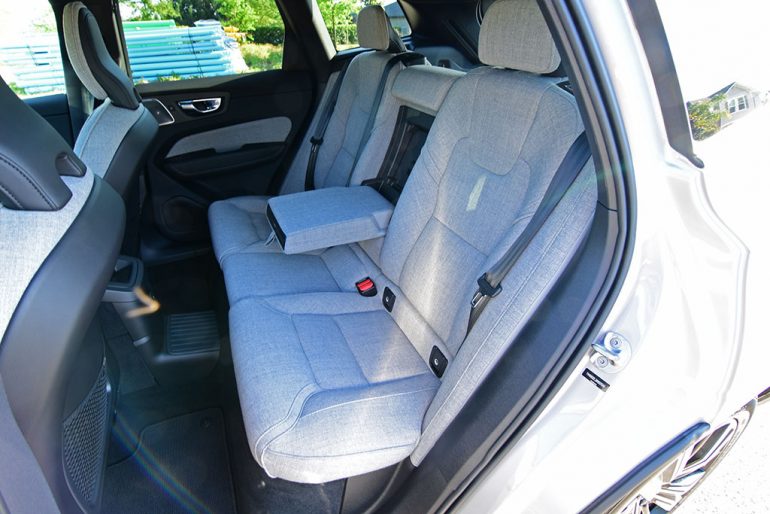 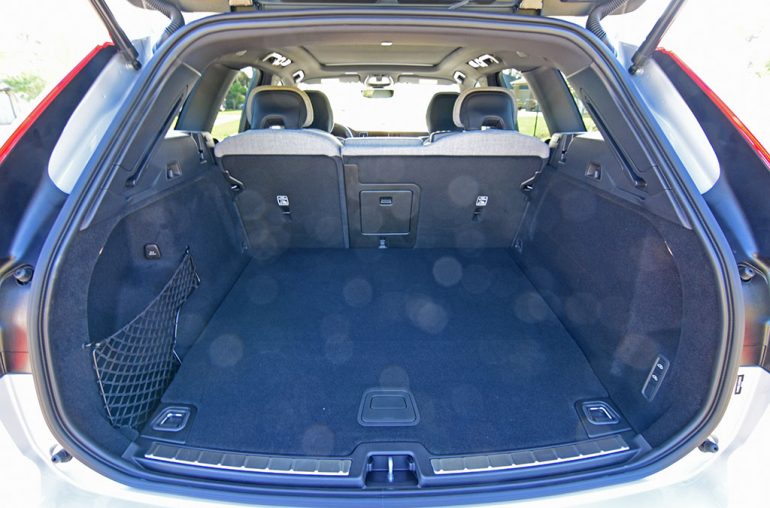 Volvo hasn’t been shy about entering into the luxury fry with their recent vehicles, and the Volvo XC60 T8 Recharge Inscription does well to elevate the premium aspects with some luxury, forward-thinking tech and safety, decent style, and innovative plug-in hybrid tech that’s truly efficient. For such a package, you’ll expect to pay at least the base price for the new XC60 T8 Recharge at $62,250, or the price of my nicely-equipped test vehicle at $72,840, which includes a $1,095 destination charge.