Breaking: It is Official – U.S. House Passes Big 3 Automakers Bailout Package of $14B 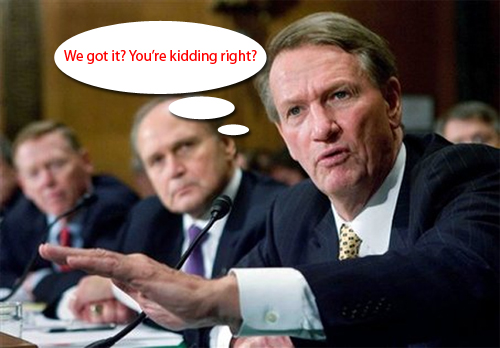 The Bailout for the Big 3 Automakers has made it through the U.S. House totaling $14 Billion. Not quite the original amounts of $25 Billion or even the $34 Billion figure that they tried to pull out of their butts the other day. So now we can move on in hopes that “THEY” do what they said they would do. Hopefully a Carczar will be appointed to oversee the rebuilding of these companies so we can get this economy to where it needs to be within the next year or two.

Let’s keep our fingers crossed that it makes it through the Senate… hmmm maybe!

Below is an excerpt from Automotive News in regards to the Big 3 Automakers Bailout Package of $14 Billion getting passed through the U.S. House.

Excerpt after the jump…

HARRY STOFFER
AUTOMOTIVE NEWS
DECEMBER 10, 2008 – 8:52 PM ET
WASHINGTON — The House of Representatives approved emergency U.S. aid for Detroit’s automakers, setting up a showdown in the Senate where prospects for passage are less certain.
The legislation would provide an immediate $14 billion in loans to prevent the collapse of General Motors and Chrysler LLC and set the stage for government stakes in automakers and Washington-directed restructurings.

The Wednesday night House vote, 237-170 in favor, was expected.
“We are hastily reacting to very fast-moving events,” said Rep. Barney Frank, D-Mass., at the outset of the House debate.

We thank the House and its leadership for their bipartisan vote to support America’s domestic automakers at this most critical time for the nation’s
economy.

The House vote brings us closer to saving jobs and to creating a more competitive U.S. auto industry in order to maintain America’s economic vitality.
We encourage the Senate to act soon so that we can continue at full speed on the restructuring and advanced technologies plans that will form a stronger, more viable GM.

Frank, chairman of the House Financial Services Committee and a coauthor of the bill, said he would have opposed letting the automakers go bankrupt at any time. But allowing that happen in the midst of a severe economic recession would be disastrous…..