Mercedes Benz Will Have “Splitview” Screen Technology In New S-Class 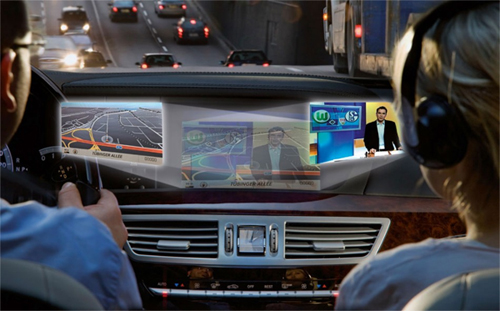 Mercedes Benz said it will offer a new Splitview display technology in it’s new upcoming S-Class that allows the driver and passenger to view to separate programs/images at the same time. This means your passenger may be able to view a DVD movie while you are trying to navigate to the nearest strip club. Okay, only kidding about the strip club. But can you only imaging, using the same display device to view different images. We already know the S-Class has a self-drive option (accelerate and brake in traffic on its own) but this one seems like a lot of commotion and a potential distraction if you ask me.

Have you ever seen those traffic lights with the blinds on it or the ones angles in a way that you can only see it from a certain angle? What about old LCD screens that the viewing angle was so narrow that you really could not read the screen if you were looking at it from an side angle? Well, this new technology kind of revisits that same concept only it actually works for the purpose of displaying two separate images viewed at certain angles only. Some may refer to this new Splitview screen as “DualView” which was actually previews in February by Bosch and Blaupunkt who happen to be the new systems developers.

The new system will be a touchscreen but only for the driver. The passenger will get a separate remote control device that may be used to control the passenger section of the screen more for watching movies in your new Benz.

We are not sure of the price on this new option but we are certain Benz will be offering it first in their newest S-Class as early as 2009.