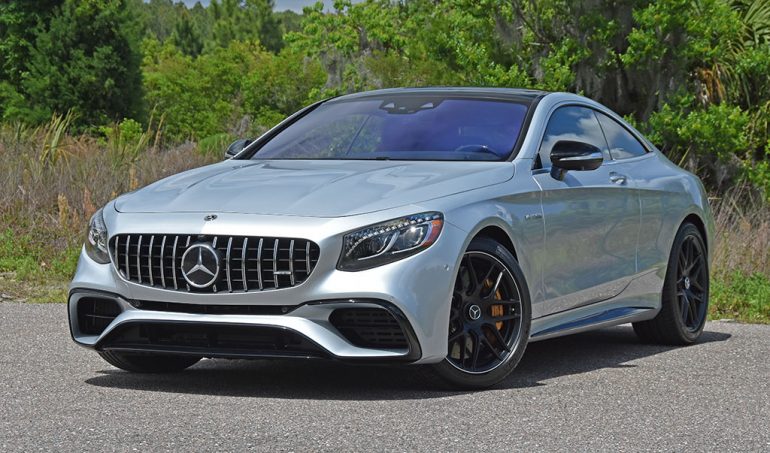 Enjoying the best that life has to offer shouldn’t be a guilt trip, though, at times it seems only natural to have a little gilt when living in the biggest house on the block and driving Mercedes’ latest S-Class Coupe when your neighbor took the safe route with a new Toyota. The new S Class Coupe is a rolling statement in many ways for enthusiasts and those who know a little something about the nearly countless offerings from the German automaker. You see, the S Class Coupe is somewhat of a rarity that takes the agreeable formula of the S Class sedan and turns it into a two-door grand tourer that fits the part to run with the likings of the Bentley Continental GT and the Rolls-Royce Wraith.

The Benz S Class Coupe is a unique offering, but some may not compare it with Bentleys and Rolls unless you opt for the thrashing AMG S63 variation, which brings thunderous acceleration and surprising performance to the table wrapped up on a luxurious package with all of the expected luxury appointments and more. I was fortunate enough to experience the AMG S63 Coupe and I was continually taken by all that it had to offer. 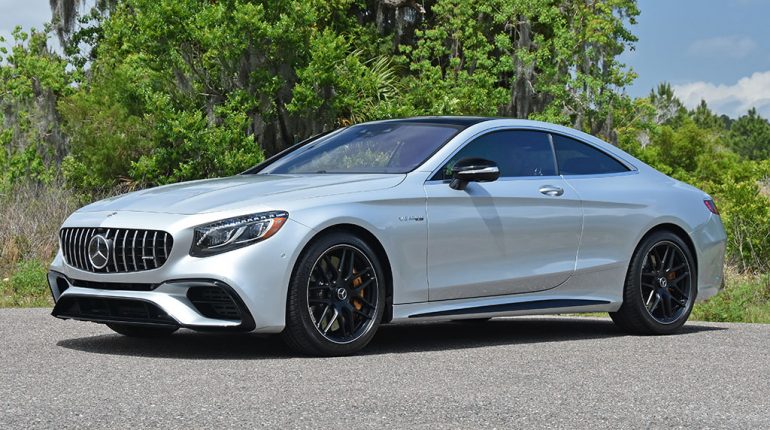 Based on a full-sized luxury sedan, the AMG S63 Coupe is more personalized than its S Class sedan sibling. With such, there seems to be more liveliness in its ability to cover ground and wrap around its driver providing 603 horsepower and 664 lb-ft of torque at bay. Those surprising power figures are made possible by Mercedes-AMG’s 4.0-liter BiTurbo V8 engine, basically a more powerful version of the handcrafted work of excellence that you find in the hot-rodded AMG GTR. To be exact, the AMG S63 has 26 more ponies which helps propel the extra heft carried around by the stately S63 Coupe. Sending power to all four wheels by AMG’s latest 4Matic all-wheel-drive system and managed by a 9-speed automatic transmission, the S63 Coupe will launch to 60 mph in 3.4 seconds or less. Astonishingly, I timed the S63 coupe making a dash to 60 mph using its Race drive mode’s launch control in just under 3.3 seconds. That’s amazing engineering for ya, getting a 4,700-pound vehicle up to speed so fast! 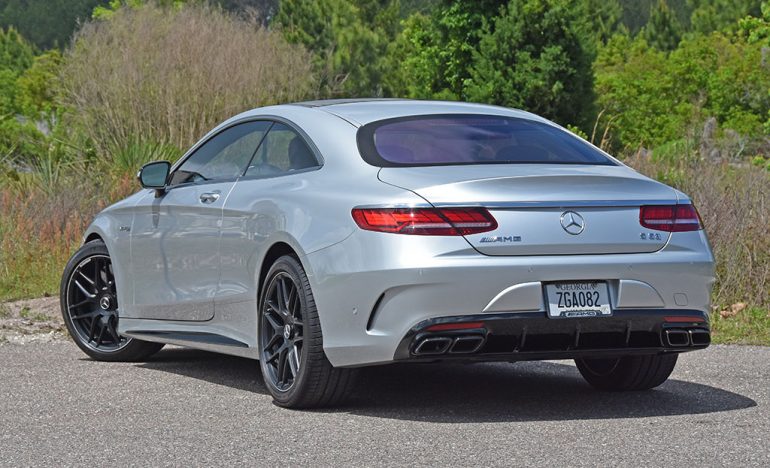 While there isn’t any lack of performance for what you would expect from a two-door S Class Benz, the AMG S63 has much more to offer to justify my test vehicle’s loaded-up price tag of $198,145. Mind you, the S63 Coupe, which is faster than its S65 Coupe stablemate that sports a more-powerful torque-monster BiTurbo V12 engine, starts at a price of $169,450. What I will say, which you may agree, is paying north of $170K isn’t going to cause heartache for those who can pay to play – simply adding the price of a well-equipped Toyota Camry at this point is easy for those with the proper means. With the additional cost, the AMG S63 gets the appropriate amenities to place it on a level to be considered for someone who has experience a Bentley or Rolls-Royce. Otherwise, the AMG S63 wouldn’t have a chance but to be a unique Benz instead of a unique luxury vehicle. Thankfully, it’s much more! 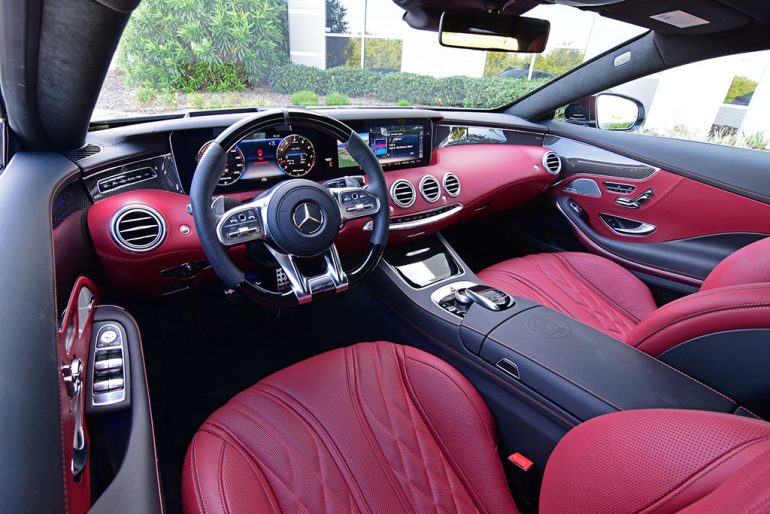 As you can imagine, the new AMG S63 Coupe has all of the comforts and luxury features that you find in the S Class Sedan, only the Coupe has a unique styling that makes away without a B-pillar for a seamless opening when you roll the front and rear seat windows down. The long heavy doors, despite their aluminum skin and structure, are on a fine line of being too much to handle but Benz does good to dampen their swings just the right amount. The use of the latest dual 12.3-inch high-resolution screens, one for a configurable gauge cluster and the other for the last generation of Mercedes’ COMAND infotainment system, serve up the expected connectivity and interaction features. One thing to note is the 2019 S63 has not yet been updated to take advantage of the latest 2020 model year MBUX infotainment system, which will hopefully be rolled out with its touch screen interface in the years to come on the S Class and its Coupe variant. 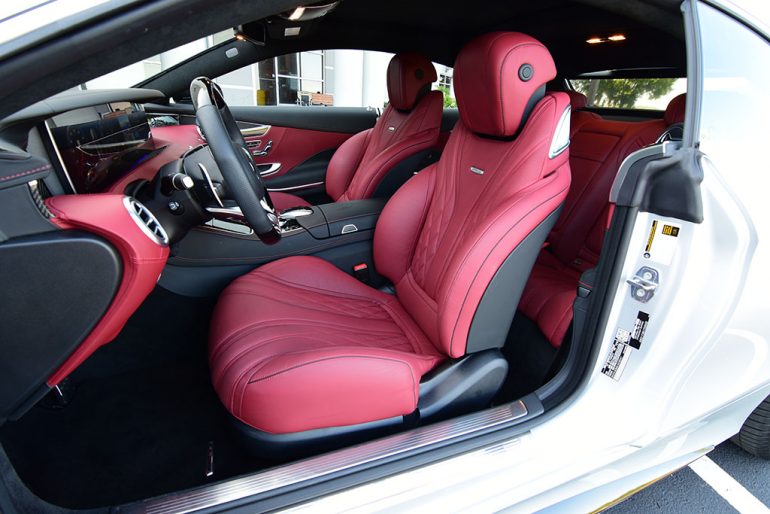 Using the latest and greatest driving autonomy is always a treat and a spectacle to try out, which the S63 Coupe does masterfully using the adaptive cruise control and lane keep features together to fundamentally drive on its own provided the road lines are clear. The system will even utilize a GPS-mapped prediction to slow the vehicle on sharp turns and make automatic adjustments to the speed limit by reading speed limit signs. If the government wasn’t so picky and we could be trusted enough, the S63 would drive itself over long distances without asking you to place your hands on the wheel every so often. 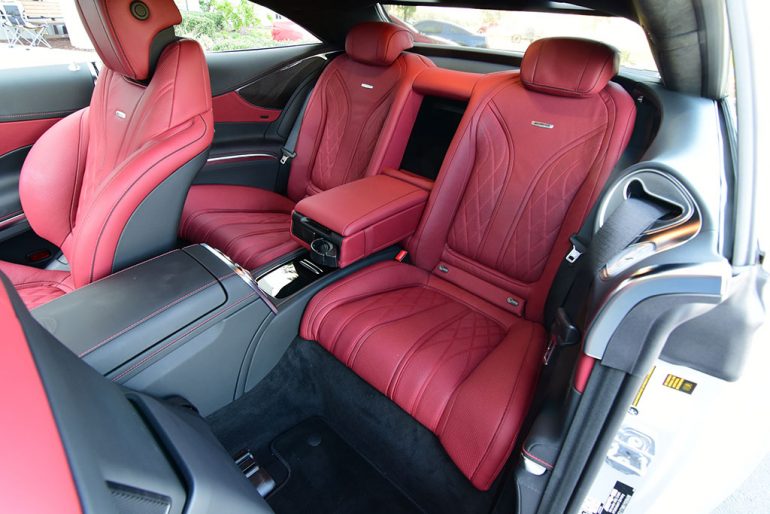 The interior of the S63 Coupe, up front at least, is nearly replicated from its sedan counterpart. Though, where things change, for obvious reasons, is the two back seats, which surprisingly have enough room for medium to small sized adults – provided that the front occupants don’t adjust the rather large and beefy front seats too far back. Speaking of beefy front seats, the S63 Coupe’s seats are massive in size, which somewhat makes sense considering they have a full array of message features, heating, cooling, and active multi-contour seat adjustments that react to lateral vehicle movements by moving the side bolsters in, to essentially push-back to keep your body firmly planted when you’re canyon carving. 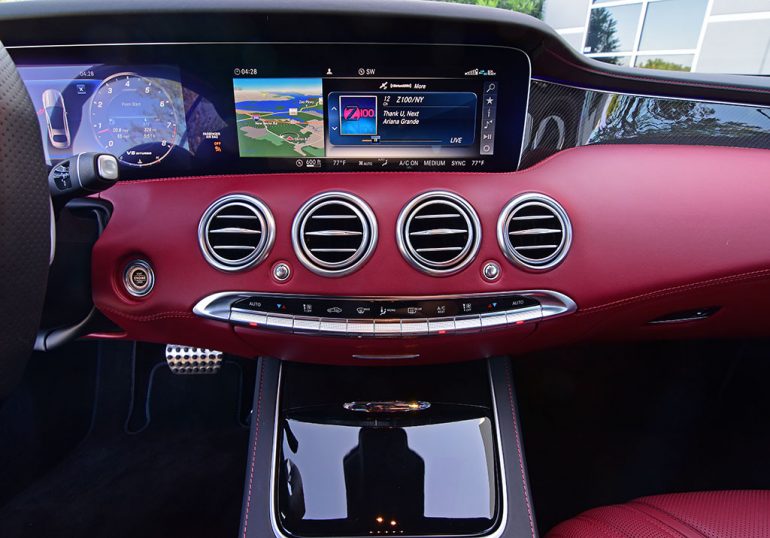 While tech plays an integral part of the make-up of the new AMG S63 Coupe, the vehicle itself conforms to be yet another Benz offering that’s different from the mainstream of luxury. It’s not the fact that Mercedes-Benz continues to throw different segments against the wall to see what sticks, it’s that vehicles like the new AMG S63 Coupe continues to be a thing that departs far from normalcy. Why does Mercedes keep making such a vehicle? Because the same people look for vehicles like the S63 Coupe year after year. They have experienced something special and want to keep experiencing the latest “special” vehicle that can be had in the quickest offering from the brand. 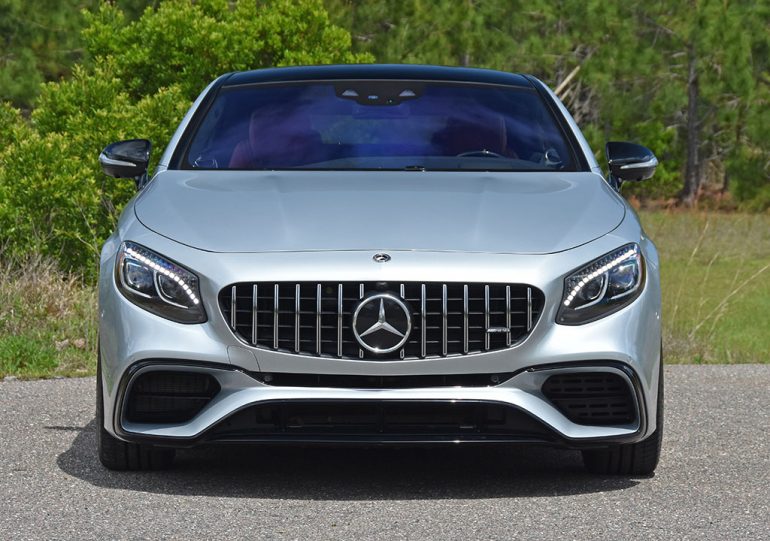