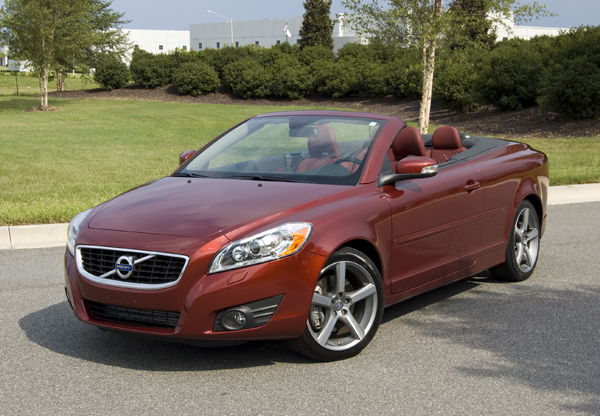 In terms of automotive evolution, the Volvo brand has always been at the forefront of passenger vehicle safety that other manufacturers naturally followed after. Now days somewhat due to government and EPA regulations, many other vehicles are just as safe as Volvo vehicles. Aside from safety, Volvo still builds a likeable car that is much more stylish than it used to be and appeals to many consumers which is evident in the new 2011 Volvo C70.

Just recently, we spent a good amount of time in a new 2011 Volvo C70, which comes only as a hard-top convertible. For 2011 the C70 has a facelift giving it an exotic appeal that flows well with the rest of the curvaceous sheet metal. Over-all, the 2011 C70 is a good looking car that somewhat stands out from the crowd especially with the top down. 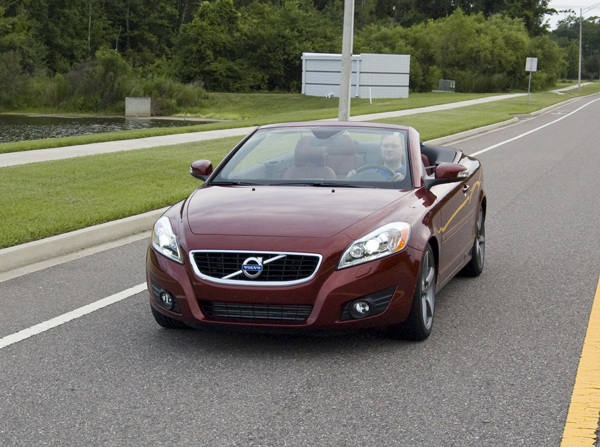 Hard top convertibles are almost in a class of their own. Many have been criticized over the years for their operation of the top whether it is clumsy at times or just down-right slow. The C70 is, for the most part, none of these. The top opens and closes smoothly with a dashboard message indicator which indicates if the top is fully closed or open. One of my two gripes about the top would be when it is in the up position it tends to have a thumping rattle while going over bumps in the road. The other complaint would be the lack of trunk space available with the top down but that is a given in any vehicle with a convertible top.

I must say, the Volvo C70 is one of the better-looking convertibles in the compact car segment. When the top is up you can hardly tell that it is a convertible and can easily be mistaken for a regular coupe. 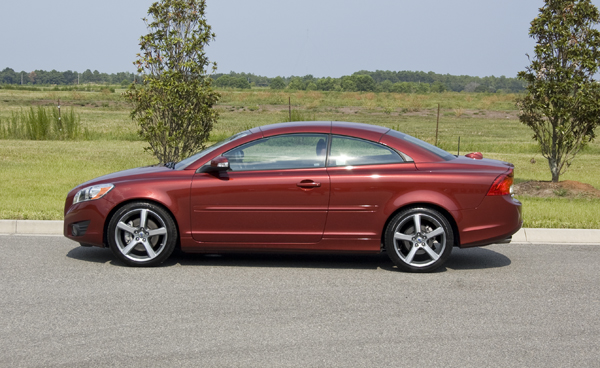 In the performance area the Volvo C70 can hold its own. Every C70 has a turbocharged inline 5-cylinder that produces 227 horsepower at 5000 rpm and 236 foot pounds of torque at a very low 1500 rpm. Volvo is well known for their turbocharged powerplants, which is something some other manufacturers are starting to explore again. The suspension is somewhat soft for the C70’s size although very manageable in the turns with the typical expected amount of understeer from a front-wheel drive setup. 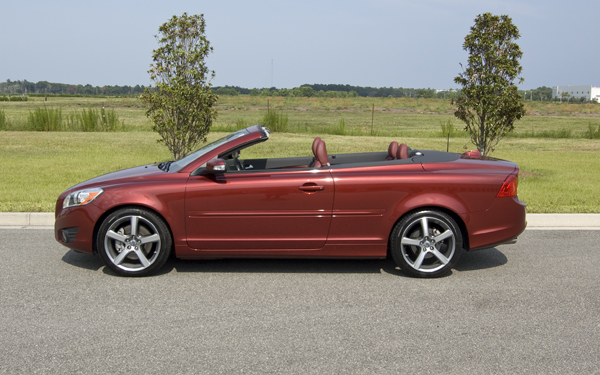 The optional 18-inch wheels are a very nice looking addition to the C70 which are wrapped in Pirelli P6 all-season tires that provide a quiet ride on the highway. The rear is unmistakable ‘Volvo’ with the newly designed LED taillights (with rear-facing fog lights) blending well into the trunk and motorized folding top cover. For the rest of the C70’ lighting, our vehicle had standard side blinkers on the rearview mirrors, front fog lights, and optional Xenon (HID) headlights with active bending. The Xenon headlights are part of a Dynamic package which also adds a sports steering wheel with an annoying aluminum inlay. The annoying part is in 100-degree weather in Florida, aluminum is not too nice to human skin. 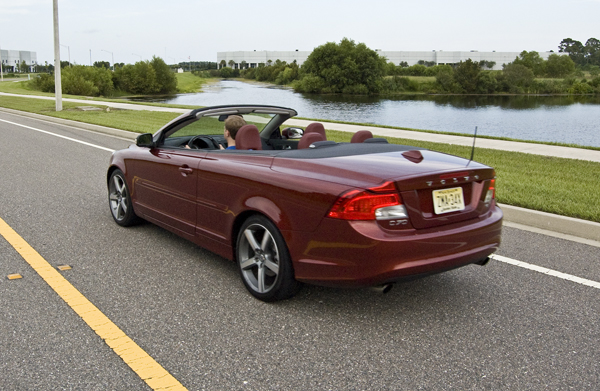 Our test vehicle was also optioned out with multimedia package that includes a nice Dynaudio sound system with 12 speakers. Part of those 12 speakers was 2 8-inch subwoofers that presented us with the most bass found in a compact car direct from the factory. Letting the top down changes the audio profile due to the decrease in trunk space. Otherwise the sound system is excellent. One other option included in the multimedia package was the navigation system. This navigation system was one major downfall to the C70, one that we would live without. I have several issues with the navigation system such as the controls, which are basically hidden on the rear of the steering wheel. Other than the rear-side steering wheel controls, you cannot control the nav other than with the provided with a 6-button IR remote control. The fold-down nav LCD screen is mounted in the center of the dash near the windshield. 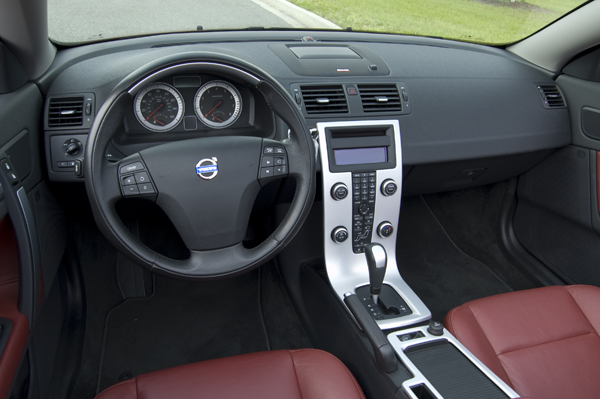 The downward flowing button controls for audio, phone (Bluetooth) and climate control inside of the C70 take a while to get used to. On the driver’s side everything is laid out well from the instrument cluster to the steering wheel mounted buttons. Our test vehicle was equipped with Cranberry leather seats that looked great with the top down. The front seats are comfy but could use a little extra side bolstering support. 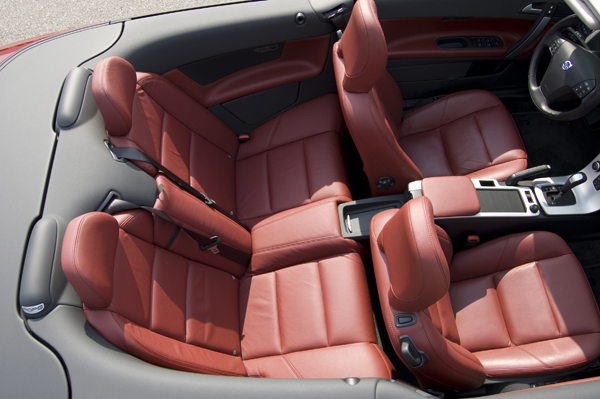 The C70 can easily seat 4 adults but back seat passengers 6 feet or over may want to reconsider. For a convertible the C70 has a decent amount of room but don’t expect luxury accommodations when taking a long trip with more than 2 people. Speaking of long trips, the C70 gets great gas mileage receiving an EPA estimate of 19mpg city and 28 highway. During our highway drive we were able to get a decent 26.6mpg while in the city we observed 18mpg in heavy stop and go traffic. Even though the a/c was working hard in our hot weather road trips, the compressor tends to shut off under moderate to heavy acceleration more than we would like. 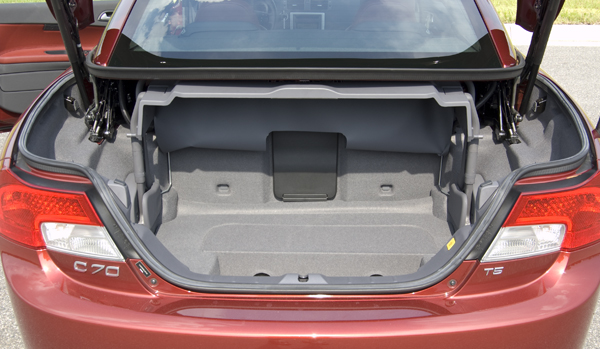 The 2011 Volvo C70 is a nice all-round hard-top convertible package, sans the navigation system. Considering Volvo’s track record for building some of the safest cars on the road, the C70 is probably your “safest” bet for a hard-top convertible. The C70 has great looks, is a joy to drive, and has a hard drop-top. Other convertible vehicles in the C70’s segment may be more performance oriented but it comes at a slightly higher price point than our C70, which has an as-tested price of $45,850. Nevertheless, the C70 looks good from all angles and has a base price of $39,950 which makes it a worthy contender in the market for hard-top convertible compacts.