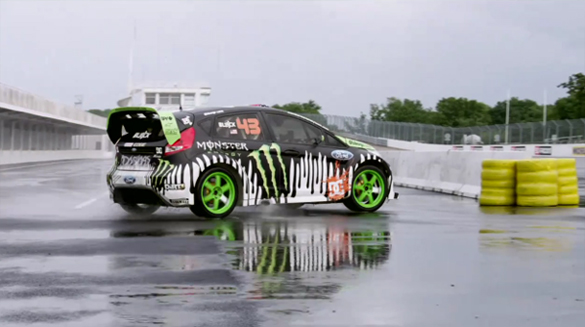 South of Paris, France in Linas, there lies a 1.58 mile oval track and the ultimate playground area for Ken Block and his 650hp Ford Fiesta in the latest installment of the Gymkhana series! Sit down and check this out… there is no doubt about this guys driving abilities. This is what you have been waiting for so Enjoy it!

September 14, 2010 – HUNTINGTON BEACH, CA – DC and Ken Block are proud to announce the release of the newest video in the widely successful Gymkhana franchise with Gymkhana THREE, Part 2; Ultimate Playground; l’Autodrome, France. Following up Part 1; The Music Video Infomercial, this action-packed video focuses on the acclaimed raw driving style seen in the original Gymkhana Practice. DC Co-Founder/Chief Brand Officer and World Rally Championship driver, Ken Block scoured the globe to find the “Ultimate Playground,” an amazing location that allowed Ken to take Gymkhana to a new, groundbreaking level in his Ford Fiesta. Check out the craziest Gymkhana video yet now live at http://www.dcshoes.com/gym3.

“The stunts I perform in Gymkhana THREE, Part 2 are without a doubt the craziest stuff I have ever attempted behind the wheel,” said Ken. “We knew in order to out do the previous films, we’d really have to take it to the next level, and since you can’t kickflip a car, the location needed to allow me to do things never done before in car. Sure, I’ve seen people drift banks, but never ones this steep, and never head on. I treated the Autodrome’s 51-degree wall like a quarter pipe and it was awesome. Awesomely sketchy! Who knew you could do a wall ride in a car?”

Shot in Linas, just south of Paris, France at l’Autodrome de Linas –Montlhéry, the 1.58- mile oval track, built in 1924, features banks as steep as 51 degrees, which is more than double the standard incline of most NASCAR ovals. Chosen by Ken for this specific reason, the ramp-like banking proved to be a unique and exciting challenge. The driving physics for the stunts Ken did were completely unknown until he actually attempted them. Look for insane moves throughout the video including the ultimate trick- a 360 alley-oop performed at the top of the bank, as well as a 1440 (thatʼs 4, 360 degree spins!) in the rain, new multi directional Segway donuts, 360 bank spins and tire-killing donuts, to name a few.

“The originality and performance in this video is truly next level,” said DCʼs President, Anton Nistl. “We are so proud of the entire Gymkhana series and weʼre excited to show the public the next chapter in creativity and innovation from DC and Ken Block. Recent accolades have placed DC as the most successful footwear and apparel company to ever market in the digital marketing space. Not to mention that Gymkhana TWO is also considered to be the biggest viral automotive ad of all time. These are both huge accomplishments for us.”

A “star” of the video in its own right, the Gymkhana THREE 2011 Ford Fiesta was specʼd out and designed specifically for this project. Built by Olsbergs Motorsport Evolution, the Fiesta features a heavily-modded Duratec 2.0l engine that produces a staggering 650 horses with 660 lb-ft of torque. All this power in a 2,425 lb chassis creates a super-car beating power-to-weight ratio. Running from a stop to 60 mph in a staggering 1.9 seconds beating even the Bugatti Veyron, the carʼs speed is only one part of the package. What makes Kenʼs Fiesta unique is how it is intended to handle and slide on tarmac-like a rally car on gravel.

The overall design and livery featured on the Fiesta is an evolution of Kenʼs current MWRT competition cars. Main features include Kenʼs signature paint drip graphic as well as the personalized KB logo treatment including Kenʼs signature “Block” lettering and # 43 graphic designed by famous graphic illustrator, toy designer and street culture artist, Huck Gee. Kenʼs newest DC apparel, footwear and accessories, which can be seen in both parts of the Gymkhana THREE Project, were also inspired by the colors and graphics of Kenʼs racing cars.

The DC x Ken Block Gymkhana video franchise now consists of seven videos including Gymkhana Practice, Bonus Edit, TWO, 2.1; the educational anniversary video, Hot For Words, and now the two part Gymkhana THREE Project. A viral internet sensation, these videos have had more than 70 million views online and received numerous awards. Most recently the Gymkhana TWO video was named one of Ad Ageʼs “Top 10 Viral Ads of All Time”, a huge honor for DC and Ken; won a 2010 Peopleʼs Telly Silver Award, presented by YouTube; earned a Bronze Pencil at the One Show Entertainment Awards in the “Online Branded Entertainment” category, and was #4 on Ad Ageʼs list of top viral videos of 2009.

For more information on the Gymkhana THREE Project including behind the scenes photos and info on Gym3: Part 1 and Gym3: Part 2 visit http://www.dcshoes.com/gym3.