Just How Fast Is A Nissan GT-R? 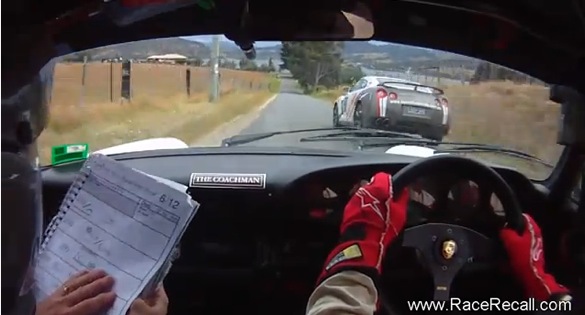 The video below contains some pretty damn impressive footage. Shot from the interior of a Porsche 911 competing in Australia’s Targa Wrest Point Rally, it shows a Nissan GT-R passing the 911, over the crest of a hill. Granted, my racing days never included time in a rally car, but I’d like to think that my simple rule against passing other drivers in mid-air helped keep me (and my car) in one piece. Listen to the gravel voiced driver point out at 0:10 into the video, “here comes a GT-R”, much the same way as he’d say “here comes a tornado” or “here comes a heat seeking missile”. I’d say the video is NSFW for language, but the driver is speaking Australian so the word is spelled differently.

It’s hard to judge the speed of the Porsche, but the driver is doing a respectable job of hauling ass. It doesn’t matter, since the GT-R walks him like he was parked, all the more amazing because the Nissan was bottled up behind the Porsche for a good seven or eight seconds. The ability to pull away with that kind of velocity is damn impressive in my book, and I tip my hat to the GT-R driver for being utterly fearless. Or absolutely insane, because the line between the two is rather blurry.