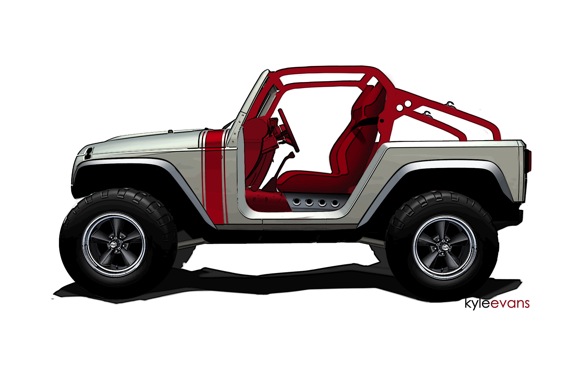 Every year Jeep and Mopar work together to launch concept vehicles at the annual Moab Easter Jeep Safari. Last year we saw eight concepts, ranging from the mild (like the stripped but rugged Wrangler J7) to the wild (like the Jeep Nukizer pickup that everyone, myself included, wants to see in production). This year, Jeep has dialed things back a notch, perhaps because the budget is quite a bit tighter than in years past. Jeep’s leaked two images of Moab vehicles, but I wouldn’t be a bit surprised if they showed up with more at the event. So far, the coolest looking ride is the Pork Chop concept you see above. Ideal for blasting through sandstone canyons in springtime, the Pork Chop would be a bit drafty for winter duty in the Northeast. I’m loving the whole minimalist look, but I’m really digging the Torque Thrust style wheels, which look sick on the bare-bones Jeep. I say throw a bikini top on it and call it done; hell, I’d even give it some serious thought, since it’s not like we get snow in Jacksonville. 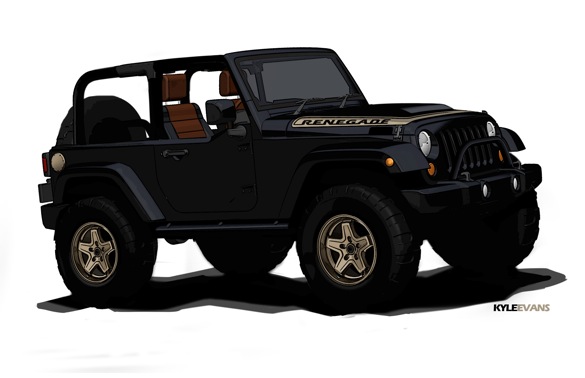 Next up is the “Renegade”, which looks like a standard Wrangler with a lift kit and some vinyl graphics at first glance. Look again, particularly at the hood. See that bulge? Something evil is lurking there, and I’m guessing it’s the 392 Hemi yanked from the new Charger / Challenger SRT-8. I know that such a Jeep has been built for “executive evaluation”, and I suspect that Jeep will use the annual Moab event to gauge customer reaction to a Hemi-powered Wrangler. Personally, I think the heavier 6.4 liter Hemi is overkill, but I could certainly see the 5.7 liter Hemi stuffed beneath the Wrangler’s fenders. If enough people like the idea of a Hemi powered Wrangler, this particular beast may see production in the not-too-distant future.