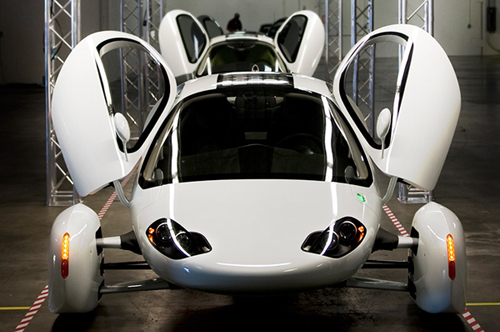 Aptera Motors, a southern California startup automotive company, has plans to put the new 2e electric-three-wheeled car in driveways by October of this year (2009). Although it is an “interesting” looking car to say the least, this vehicle should get the equivalent of 200mpg and can achieve 100 miles on a single charge. The 2e is all-electric and looks like a contender to win the $10 million Progressive Automotive X Prize which is basically a race to build a “supergreen car”.

As automakers struggle to make an abrupt change in the way they build cars and the green-friendly technology put in them, many new firms and startup companies such as Aptera Motors are developing new innovative creations for the masses. These new creations surpass anything ever seen on the road when it comes to being environmentally friendly. Even so, during the North American International Auto Show this year we witness the most “green” show ever from major Auto manufacturers around the world.

Looks like we will only see more and more of these innovative vehicles while we have already witnessed new breakthroughs by Fisker, GM and Tesla Motors to name a few.