Is Kia Working On A V-8, Rear Drive Sports Car? 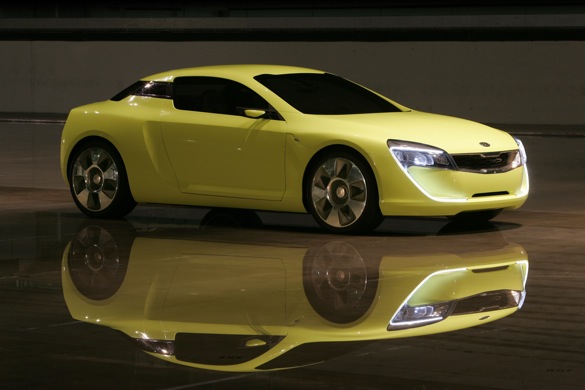 In the automotive world, the summer months can easily be referred to as the “silly season.” There aren’t any significant auto shows going on, and most manufacturers avoid summer releases of product. If you cover news from the auto industry, this time of year leaves you scrambling for things to write about; after all, how many times can you cover the latest Consumer Reports trends, or J.D. Power rankings, or FBI crime stats?

Which explains why so many rumors get started in the summer. In the last week alone, I’ve seen stories on the 2015 Ford Mustang (which, allegedly will be smaller and available with a four-banger, just like the epically bad Mustang II), a revived Ford Capri (based on the Iosis Max egg-shaped concept), and BMW’s yet-to-be announced M2 (rumored to have a 350 horsepower, tri-turbo engine). Are any of them true? Maybe, maybe not, which is why I’ve avoided writing about most of them. On the other hand, there’s a rumor floating around about Kia launching a V-8 sports car, and I tend to believe this one.

If Motor Authority is right, Kia will show a front engine, rear drive sports coupe at September’s Frankfurt Motor Show. An alternate design will be shown at next year’s Detroit Auto Show, and the Korean automaker will pick the best received design for production beginning in 2014 or 2015. The car will use Hyundai’s Tau V-8, currently good for 385 horsepower as a 4.6 liter or 429 horsepower as a 5.0 liter, and might even spur development of a performance oriented sub-brand, along the lines of Ford’s SVT or Chrysler’s SRT.

Kia is already positioned as the Pontiac to Hyundai’s Chevrolet; in other words, Kia is aiming for a younger, more enthusiast-oriented clientele. Nothing will help advance that focus quite like an aspirational halo car, much like Hyundai’s Genesis sedan or Equus sedan. Kia doesn’t need a four-door luxury car, but they do need a coupe capable of running with the Nissan 370Z, the Ford Mustang GT or the BMW 135i. In fact, Hyundai’s Genesis Coupe makes more sense under the Kia umbrella than under Hyundai’s, where it’s been all but forgotten by dealers and customers alike.

If I were a betting man, I’d lay my money down on this particular rumor as “probable”. Look for more details as we get closer to the Frankfurt Auto Show.