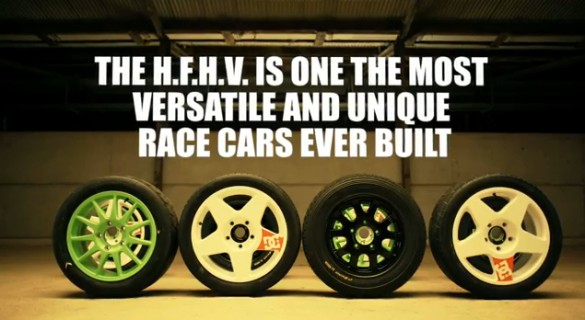 If you’re an enthusiast, the word “hybrid” probably conjures up images of a Toyota Prius, being driven at one mile per hour below the speed limit, in the left lane, by some eco-fanatic attempting to squeeze the last tenth of a mile per gallon from the car’s anemic engine and motor. That’s what I think of at least, and I’ve never driven a hybrid with any kind of serious entertainment value. Not all hybrids are created alike, and the term “hybrid” doesn’t always apply to the powertrain alone.

Ken Block has a serious need for a hybrid vehicle. Not one that runs on battery and gasoline power, mind you, but a race car that can excel at gymkhana, rallycross and stage rally events. One that can put down the 600 horsepower and 665 ft-lb of torque produced by the car’s specially built 2.0-liter EcoBoost engine, across a wide variety of surfaces, tracks and driving conditions. Enter the H.F.H.V., or “Hybrid Function Hoon Vehicle”, built as a collaboration between the Monster World Rally Team and its supplier partners across the globe.

The H.F.H.V. cuts the number of cars campaigned by Block from 3 to 1, which greatly simplifies transportation, set-up and race preparation. It also allows Block to focus on driving a single car, instead of having to master three different vehicles. See the H.F.H.V. in action in the video below.