The Ultimate Drive? There’s An App For That

posted by Kurt Ernst
Filed under Automotive, BMW, Find of the week 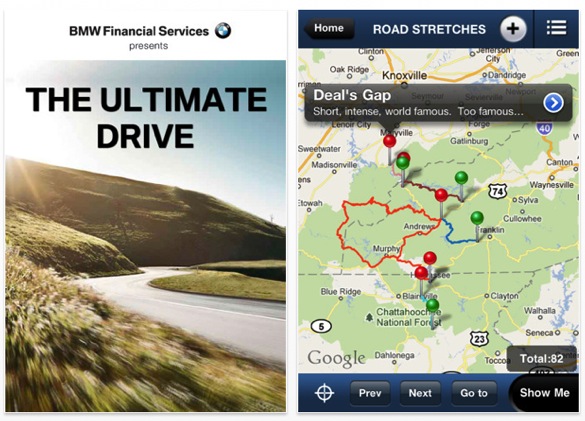 Wouldn’t it be cool if there was an app to tell you about great driving roads near you? One that rated them and gave details on why the road was so good? Better yet, what if the app allowed you to share routes on Facebook or via e-mail, and even upload them to a GPS device? Thanks to BMW Financial Services, there is, and the best part is that the app is free.

Available for both iPhone and Android platforms, The Ultimate Drive shows you scenic and entertaining roads all over the Untied States, and in 49 other countries. If you live in Colorado or Southern California, epic roads are a dime a dozen; living here in Florida, they’re a bit harder to come by. Sure enough, though, The Ultimate Drive gave me a few nearby roads that I didn’t even know about.

It’s an interactive app, so drivers can upload and save their favorite stretches of asphalt. In the future, the app will award you points based on the number of routes you’ve driven, and will rank drivers by their scores. If you’re awarded the “Mayor of Deal’s Gap” honor, I’m guessing you know your way through the Dragon well enough.

I haven’t had much time to play around with it, so I can’t give you an official review just yet. It’s a great concept, and it’s a whole lot easier than staring at Google Maps for hours on end. I’d say it’s worth a download.