All You Need To Know About The New Camaro ZL1, Except Price We’re still months away from the launch of the king-of-the-hill Camaro, but Chevy is leaking just enough information through various outlets to keep fans fired up about it. We now know how much power the car will make, we know that it will use GM’s superb magnetorheological (yes, that’s really a word) suspension, and we know it will be as track-ready out of the box as any car weighing around two tons can be.

First the engine: the ZL1 gets the LSA V-8 as the Cadillac CTS-V. Thanks to a revised intake, improved supercharger airflow and a higher efficiency intercooler, the engine will make 580 horsepower and 556 ft-lb of torque. Just for reference, that’s 24 more horsepower than the Cadillac CTS-V, with the exact same amount of torque. If you want to compare that against the Shelby GT500 Mustang, the Camaro has a 30 horsepower advantage and puts up 46 more ft-lb of torque; on the down side, the ZL1 will also be heavier than the Shelby, although GM hasn’t released the Camaro’s exact weight just yet. 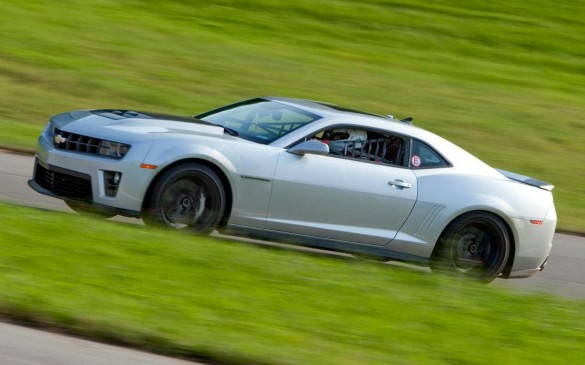 The ZL1 gets the same Magnetic Ride Control suspension system found on the Corvette ZR1 and the Cadillac CTS-V. Delphi also licenses it to Ferrari for the 458 Italia and to Audi for the R8, so the ZL1 is in good company. If you’ve never experienced it, believe the hype: the suspension does an amazing job of blending handling with ride comfort, and can be easily adjusted from a street setting to a track setting.

As for the rest of the car, think “heavy duty” and you get the picture. Expect to see both transmission and differential oil coolers, as well as brake cooling ducts. The ZL1 uses an electric power steering system, too, ensuring that absolutely no horsepower is wasted in driving an old-fashioned power steering pump.

Pricing hasn’t been set, but keep in mind that a 2012 Shelby GT500 with no options lists for $49,605 with the destination charge factored in. The Camaro looks like it will be a lot more car, but GM knows they can’t charge a lot more money for it. We’ll go out on a limb and guess that the ZL will start just under $52k, but we’ll know for sure by the end of the year.