Is This The New Hyundai Genesis Coupe? 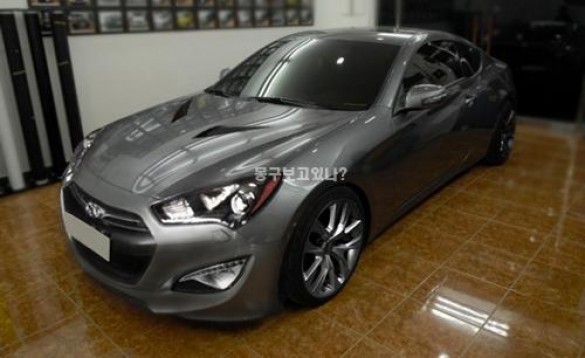 Is this the 2013 Hyundai Genesis Coupe? Image: Hyundai Blog

We’ll apologize in advance that we can’t give you a whole lot of detail on the above photo. It first appeared on Hyundai Blog, under the title of “2013 Hyundai Genesis Coupe,” and the styling does indeed tie the Coupe into Hyundai’s latest “fluidic sculpture” design language. There’s the now-familiar hexagonal grille, along with the sculpted hood and character lines running from the front fenders and across the door. I’m even seeing a bit of the Nissan GT-R in the front end design, although I don’t think the resemblance is intentional.

The current Genesis Coupe has been the red-headed stepchild of Hyundai’s lineup, getting minimal refreshes since its launch in 2009 as a 2010 model. The Genesis sedan has gotten more power and new engine choices, as well as an eight speed automatic. The Genesis Coupe, meanwhile, has gotten one new variant (the 3.8-liter Genesis Coupe R-Spec), leading many to believe that Hyundai wasn’t serious about targeting the enthusiast market.

Hyundai still has 2012 Genesis Coupes to sell (and plenty of leftover 2011s, I’m sure), so don’t expect a lot of details on the 2013 Genesis Coupe in the near future.