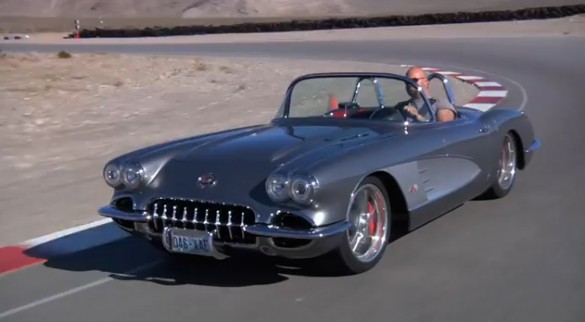 If you own Gran Turismo 5 for the Sony PS3, chances are good you’ve seen the Art Morrison 1960 3G Corvette. You may even own it, if you’ve got a bank account big enough, or you may have simply looked it over and opted to buy something more contemporary. After all, who wants a fifty-year-old relic when you can buy something really fast, like a Nissan GT-R, for less money?

Watch Matt Farah drive the Art Morrison 3G Corvette in The Smoking Tire episode below, and you’re likely to come away with an entirely different perspective. First, the only thing the Art Morrison Corvette has in common with an original 1960 Corvette is the body style. Underneath, the 3G Corvette rocks a modern chassis, modern suspension, modern brakes and a seven-liter V-8 good for 538 horsepower. It’s got 50 / 50 front to rear weight distribution and and extremely low center of gravity, so it’s going to hold its own against a lot of cars on the racetrack.

Some would say that cutting up a survivor 1960 Corvette is an act bordering on blasphemy, but I’d beg to differ. Art and Craig Morrison have taken something and improved it in every way, and there are plenty of low mileage, trailered-to-car-shows 1960 Corvettes to gawk at. Their 3G Corvette took over 3200 man hours hours to build, and the result is a one-of-a-kind masterpiece of design and engineering.