Can’t Get Enough Clarkson? You’ll Want His New DVD, Then 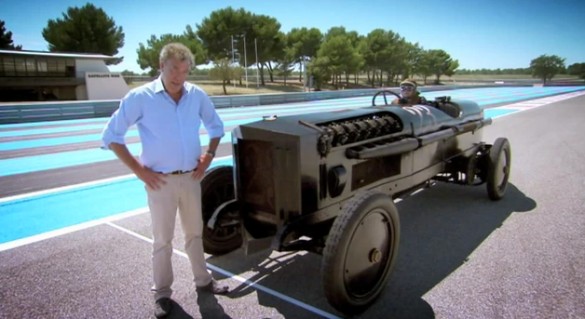 There are few who’d deny that Jeremy Clarkson has the best job in the world. As the star of BBC’s Top Gear (and, really, the genius behind its success), Clarkson gets paid to drive the best cars in the world and tell people about it. Unlike a professional driver, Clarkson doesn’t have to worry about lap times or keeping sponsors happy; instead, Clarkson regularly pisses off companies, special interest groups and, occasionally, entire countries. If you’re a fan of Top Gear, or a fan of Jezza himself, you’ll want to add his latest DVD, “Powered Up,” to your holiday wish list.

There doesn’t appear to be much different than the standard Top Gear format, but why mess with success? It looks like Clarkson gets seat time in a Lamborghini Gallardo Spyder Performante, a McLaren MP4-12C, a Nissan GT-R, a Porsche 911 GT2 RS and something called the “Brutus,” which is a 1908 race car chassis stuffed with a 46-liter V-12 BMW engine, liberated from an airplane. Clarkson describes it as “the stuff of nightmares,” and “the tenth circle of hell,” but to me it looks like great fun.

You can get a better feel for “Powered Up” in the You Tube video below. Like “Heaven and Hell,” an earlier Clarkson DVD, there won’t be much of socially redeeming value on the disc, but no one watches Top Gear to boost their intelligence. Instead, it’s the mental equivalent of comfort food for gear heads, so go ahead and order up the meatloaf, macaroni and cheese and shoepeg corn on DVD. It’ll hit stores this November.