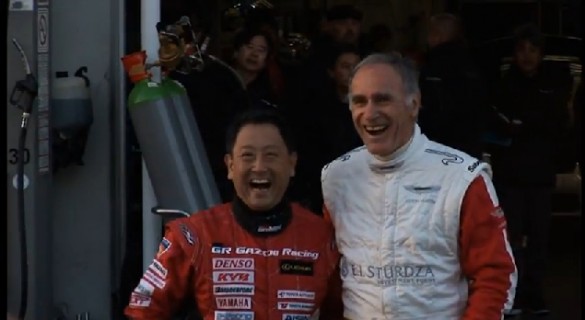 If you ask us, a good CEO should have more than a passing knowledge of his company’s products, and should be able to demonstrate them competently. In the early 1990’s, a television series called “TV Nation” put this to the test, and challenged CEOs of major corporations to demonstrate their products on live TV. The only one who agreed was Ford’s CEO, Alex Trotman, who changed the oil in a Ford Explorer on camera.

Trotman’s willingness to get his hands dirty spoke volumes about his work ethic, and I’ve admired Ford ever since. After watching the video below, I feel the same way about Toyota and Aston Martin. As the script says, instead of playing golf, Akio Toyoda and Dr. Ulrich Bez go racing, and both men are accomplished drivers who are passionate about motorsports.

That message comes through on Aston Martin’s cars, but it’s lost in translation on the current crop of Toyotas. Let’s hope that changes when the FT-86 (or Scion FR-S) finally makes it to market; besides, we know that Toyoda-san himself wants to see enthusiast-targeted cars in Toyota’s product line.

In the mean time, enjoy the video, found on Autoblog, below.