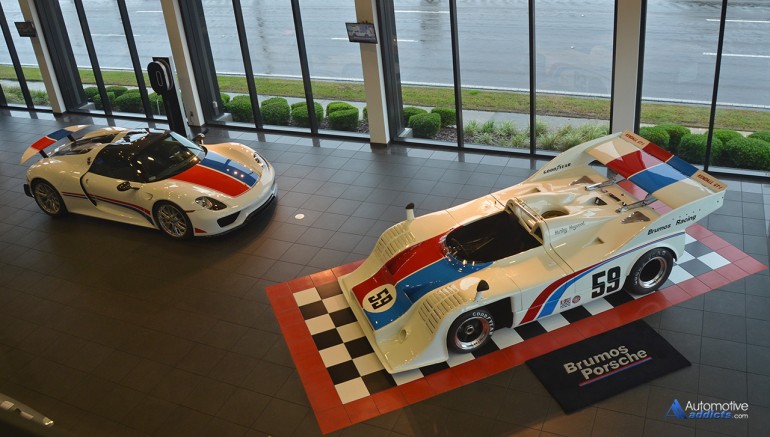 Automotive racing is as synonymous with car enthusiasts as peanut butter is with jelly on a sandwich. Within that realm of racing, the Brumos name rings a bell among enthusiasts. Established in 1971 by Peter Gregg, Brumos Racing means victory. The #59 emblazoned Porsches are famous for taking home many wins and podium finishes. 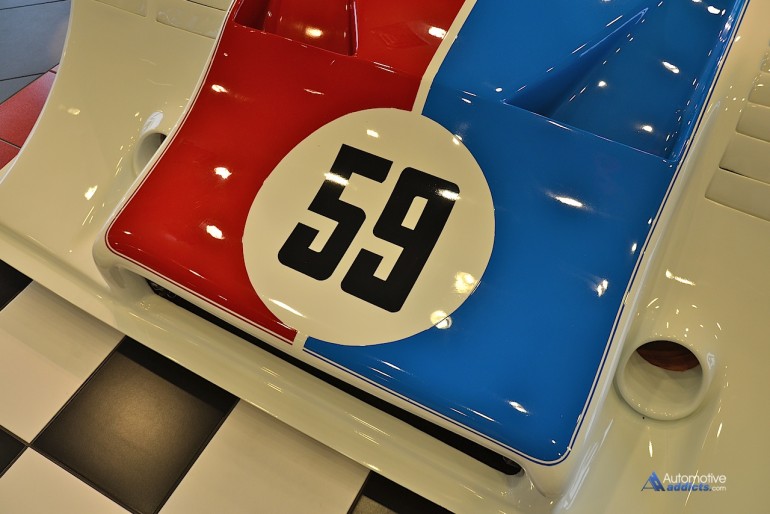 The quick thought of Jacksonville natives and those who call the biggest city land-wise in the USA home, is that Brumos is a large car dealer network selling record numbers of Porsches, Mercedes-Benz and even Lexus vehicles. Sure, that is true, but at the full scope of things Brumos is much more. 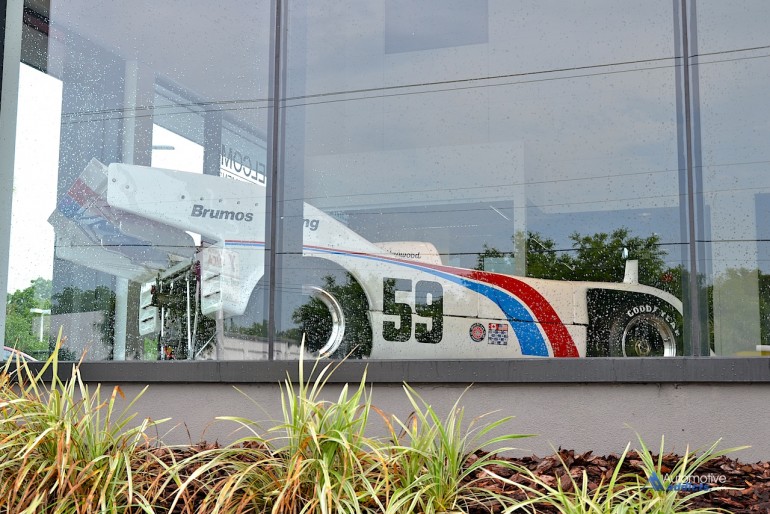 With 4 wins captured by the Brumos racing team at the 24 hours of Daytona, the name Hurley Haywood comes to mind, who happens to be American’s most decorated endurance race driver ever. Haywood has 5 wins at the Rolex 24 Hours of Daytona, 3 at the 24 Hours of Le Mans, and 2 at the 12 Hours of Sebring. What rings as one in the same with Brumos and Hurley Haywood, is their home town of Jacksonville, Florida.

Recently, upon a rainy-day visit to Brumos Porsche here in Jacksonville, FL, thanks to Brumos Porsche general manager Ray Shaffer, we were able to receive a guided walk-around of Hurley Haywood’s new Porsche 918. Porsche’s new hypercar has captured many around the world as one of the fastest utilizing today’s advanced hybrid technology. Such a vehicle, with a price tag of about $1.1 million as it sits on the Brumos Porsche showroom floor, is a modern marvel chock full of enough gadgetry to literally (well almost) plan and launch a mission to Mars. With 887 horsepower and 944 lb-ft of torque on tap from a joint session of its 4.6-liter V8 engine and series of a 127-horsepower electric motor for the front wheels and a 154-horsepower electric motor out back, the Porsche 918 Spyder is good for a run to 60 mph in 2.2 seconds and a top speed of 214 mph. The new 918 Spyder gets these crazy numbers yet still manages to muster out 24 mpg and can travel on full electric power up to 90 mph for about 12 to 15 miles. 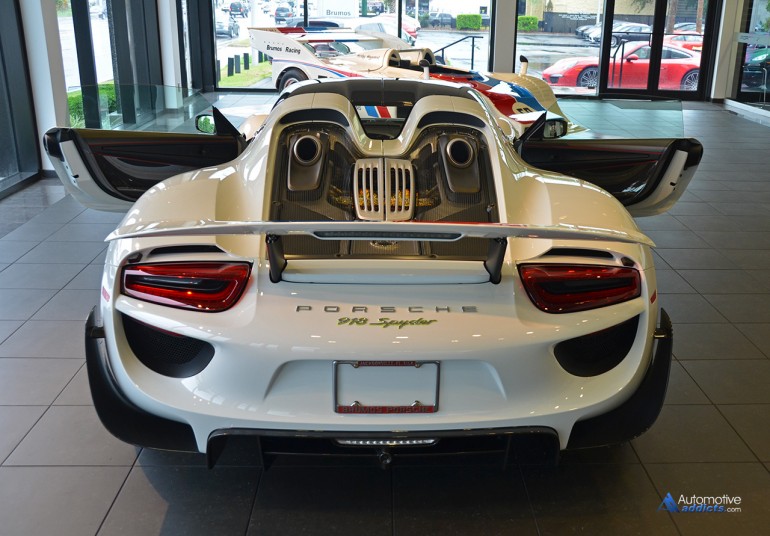 Not only were we taken by the stunning beauty of the new one-off Porsche 918 dressed up in Brumos Racing livery, but we were able to contrast it with Haywood’s Can Am Porsche 917 race car (917/10). The fiberglass built twin-turbo racer that itself was a prodigy of its time, paving the way for several podium finishes in Can-Am races during the 1973 and 1974 seasons. 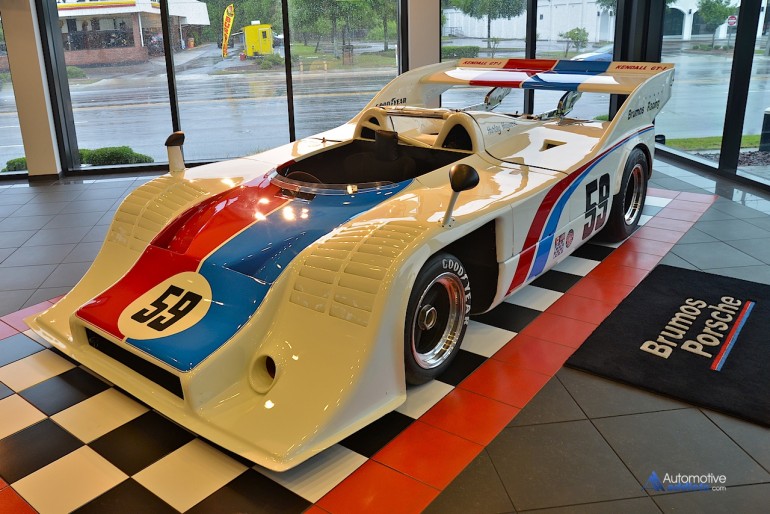 In Jacksonville, FL, we sometimes take for granted the city’s long history of automotive racing with Brumos leading the way. Not to mention, having a home town hero in Hurley Haywood deserves celebration. 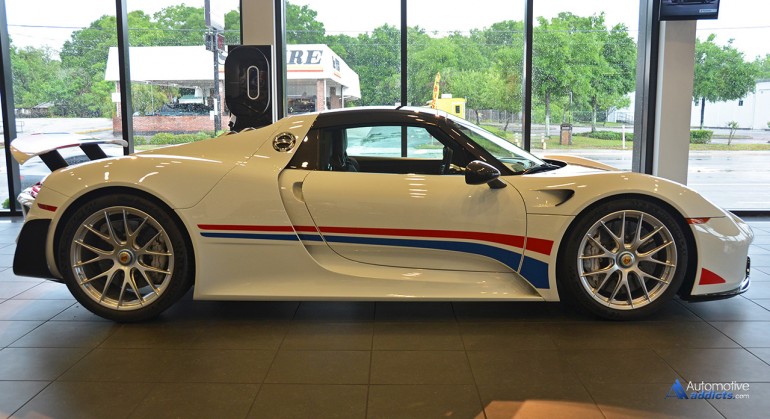 If you are ever in the area of Brumos Porsche on Atlantic Blvd., we urge you to stop by the dealership, or at least have a quick glimpse through the showroom window to see the future of sports cars and at the same time witness a legendary racecar that calls Jacksonville home.