In Russia, Necessity Is The Mother Of Invention 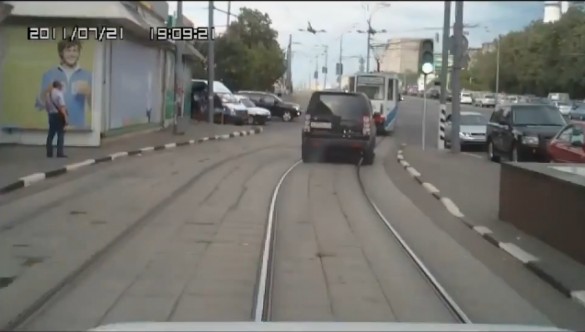 In the former Soviet Union, the dream of owning a car like a Land Rover was beyond the average Russian, who needed to slave for decades to afford a car like a Lada. Now that Russia has embraced capitalism, however, there are plenty of cars of all shapes, sizes and values on the road. While that’s good for the average Russian citizen, it also produces regular traffic jams of epic proportions, since many of the roads were built when only a fraction of the population could afford cars to drive on them.

What’s a well heeled Russian politician / gangster / businessman to do when he needs to get to the office or strip club, pronto? If you own a Land Rover, the answer is “whatever it takes to beat traffic.” The video below (from The Smoking Tire) may start on the slow side, with our anti-hero driving behind a street car to dodge the epic traffic jam on the main road, but I assure you it isn’t just four-and-a-half minutes of “follow the trolley.”

Take note of the various traffic jam avoidance techniques used, since they may come in handy on your next vacation in Moscow. I suspect the start of the video has lots of disposable income, and plenty of friends in high places, so getting caught would be only a minor inconvenience. Unless you’re equally hooked up, getting caught would probably mean a lengthy stay in Russia, as a guest of the state, so deploy the video wisdom below at your own risk.