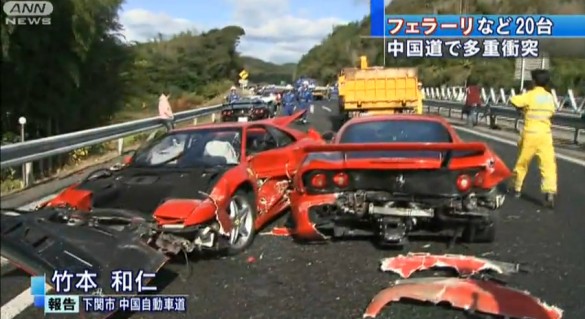 Years ago I rode with a sportbike club, until one ill-fated weekend ride where the group suffered three crashes and a member received a ticked for 100 miles per hour OVER the speed limit. After spending two days running from a certain Western state’s highway patrol, I realized that having a license, and not being dead, were more important than the occasional high-speed hoon weekend. Bad things happen in high speed groups, whether you’re talking about motorcycles or cars.

Take the incident below, which was found on Jalopnik. It seems that an exotic car club was en route from Kyushu to Hiroshima when the driver of a Ferrari lost control while overtaking in a curve. His car hit the median, creating a chain-reaction accident that ultimately totaled 14 cars. Included among the carnage were eight Ferraris, three Mercedes-Benzes, a Lamborghini, a Nissan Skyline and a Toyota Prius (which, if we had to guess, probably wasn’t driven by a club member.

The good news is that no one was seriously injured in the accident, which shut down the stretch of road in Yamaguchi Prefecture for some six hours. Wet roads likely played a part in the accident as well, which is no up to the police and insurance companies to sort out.