The 2012 Cadillac Escalade Won’t Be So Easy To Steal 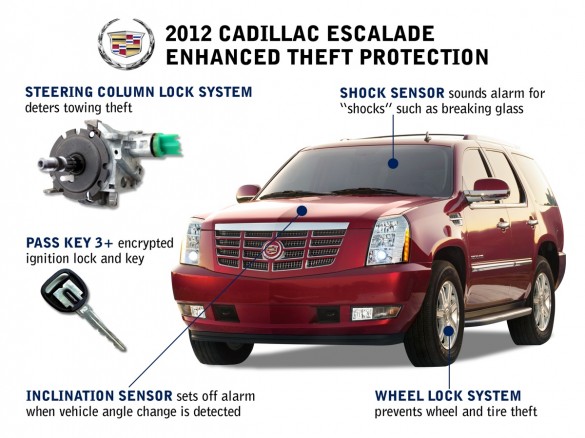 While the Cadillac Escalade has racked up plenty of awards (and legions of fans) since launch, one that doesn’t sit in the front of the trophy case is “Top Ten Most Stolen Vehicle.” The Escalade is a target for car thieves, thanks to its export value, its parts value and the truck’s bling factor. Cost saving measures from GM, like an easily-defeated plastic steering wheel lock, didn’t help matters any, either.

For 2012, Cadillac wants you to know that they’ve significantly enhanced security on Escalade models. First up is the PASS Key 3+, which uses electronic encryption between the key, the lock cylinder and the ignition system. When the key is inserted into the ignition cylinder, the system looks for an electronic handshake; if none is given, the car won’t start, even if the key used unlocks the cylinder.

Steering column locks are strengthened for 2012, too, making roll-away thefts on a flatbed more difficult if the truck is parked with the front wheels turned. All GM vehicles also come with OnStar, which can help locate and even disable a vehicle after a theft occurs.

Cadillac is offering optional security enhancements, too, like a new style of wheel lock said to be more secure than previous versions. There’s an available shock sensor, which is aimed at reducing content theft, and Cadillac is also offering a tilt sensor that triggers the alarm when a change in inclination is detected.

A little common sense goes a long way, too. Don’t leave valuables in your car, period, even if you think they’re out of sight. Park in well-lit areas, preferable within sight of security cameras. Always lock your doors when you leave your vehicle, and lock them again as soon as you enter. Never leave you vehicle running, even if you’re only away for a few seconds.

No car will ever be theft-proof, but by making yours harder to steal, you can encourage car thieves to shop elsewhere.