For a decade, Nissan has been leading the path for crossover SUV vehicles. By expanding the crossover line with new vehicles such as the Rogue, Nissan has managed to provide consumers with a more efficient and economical alternative in a massively competitive segment.

The new 2012 Nissan Rogue, continuing its versatile platform based off of the Nissan Sentra, gives drivers crisp handling and sporty characteristics in a 5-passenger compact crossover package.

The Nissan Rogue, first introduced as a 2008 model, receives some additional refinement and features set for the 2012 model year. The new 2012 Rogue adds an optional Special Edition trim package and a 360-degree camera view in place of the single standard back-up camera. The new 360-degree camera view is just like Nissan’s and Infiniti’s infamous around-view monitor system. For the Nissan Rogue, the system utilizes the small 4.3-inch color LCD screen to display images for a series of 4 cameras for a virtual over-head drop-down view. The rather smallish screen is also used for display of the audio, GPS navigation and a select number of vehicle settings. 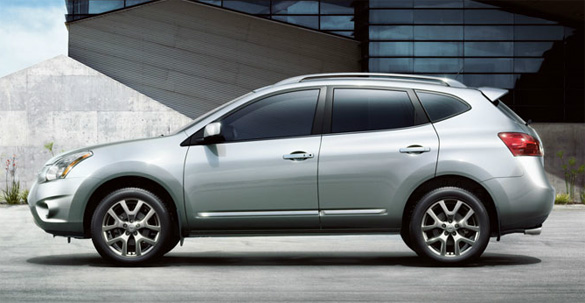 Being that the Nissan Rogue is based on the compact Nissan Sentra, front legroom is somewhat compromised. Although, finding a comfortable seating position for someone as tall as me (6’ 3”) is not an impossible task. My Rogue SV test vehicle was equipped with a 6-way power driver’s seat with lumbar support. The front heated leather seats are comfortable but lack ample bolstering for spirited driving. Rear seating is surprisingly good while cargo capacity is on the low side, even with the rear seats folded, for the small crossover segment.

The perception of interior quality is high in the new 2012 Nissan Rogue. Nissan also does a good job with placement of all controls. The a/c and heater controls may take a bit to get used to with only three large dials and full auto settings without any LCD screen read-out.

Carried over from previous years, is the Nissan Rogue’s 2.5-liter inline 4-cylinder engine producing 170 horsepower and a healthy 175 ft. lbs. of torque. Nissan also continues to use their CVT (Continuous Variable Transmission), which may be bitter sweet for some consumers in the market for a compact crossover. The CVT transmission uses Nissan’s latest programming but still manages to allow a drone sound from the engine to seep into the cabin at high RPMs. Regardless of the flack that CVT transmissions receive, the Nissan Rogue is still just as nimble as some of its V6-equipped competitors. Undoubtedly, the meaty torque from the 2.5-liter 4-cyl powermill really helps especially when the CVT transmission’s computer performs an early lock up of the torque converter under light loads. This scenario also helps the new Rogue obtain its 23mpg city and 28mpg highway fuel consumption figures.

The 2012 Nissan Rogue’s handling attributes have an edge over many other compact crossovers. The newly designed 17-inch alloy wheels and sporty suspension help keep the Rogue firmly planted on the pavement. For 2012, there is a new sport-mode button that slightly remaps the CVT transmission to give the driver more of a sporty power delivery. I noticed that by using the sport button, the CVT transmission kept the RPMs in a higher range making power quickly available.

The new 2012 Nissan Rogue’s car mannerism is a major selling point as is its lower price point when compared to its bigger V6-powered sibling, the Murano. For 2012 there are only two trim levels, the Rogue S and SV. My Rogue SV came well-equipped but lacked rear seat versatility found in other compact crossovers such as adjustable seat-backs and a center armrest. The over-all usefulness of the Rogue being a crossover has its benefits over a compact car without sacrificing car-like drivability. In my opinion the new Nissan Rogue is a better-looking crossover than the Murano, but obviously lacks the robustness of the V6 power and luxury amenities. For a compact crossover, the 2012 Rogue leads its class and beckons competitiveness when it comes to sporty car-line driving characteristics.

A competent all-wheel-drive system is offered on the new Nissan Rogue slightly reducing the fuel consumption to 22mpg city and 26mpg highway. The 2.5-liter engine is well capable of delivering ample and balanced power to all four wheels in inclimate weather conditions. Towing is limited to a paltry 1,000 pounds. Acceleration time for the 2012 Nissan Rogue front-wheel-drive comes in around 8.6 seconds, which is in-line with other small crossovers.

My 2012 Nissan Rogue SV front-wheel-drive test vehicle has an as-tested price of $29,290, a bit on the high-side for a compact crossover. Fortunately, the Rogue S starts at an MSRP of only $21,840, which is a competitive price point for a sporty compact crossover.