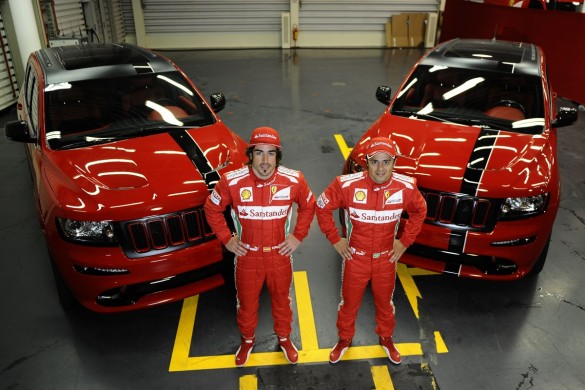 Formula One drivers aren’t like you and I. They live in nicer houses, have bigger bank accounts and sometimes have garages filled with lustworthy cars. Jenson Button, for example, used to own a Bugatti Veyron, and the McLaren Mercedes driver recently sold his classic Ferrari 512 BB. It’s not uncommon for automakers partnered with F1 teams to give drivers their wares, since it’s clearly good advertising for the brand. Current world champion Sebastian Vettel drives an FX50 crossover from team sponsor Infiniti, and we’d be willing to bet he didn’t pay list price for it.

Ferrari recently issued new company cars to team drivers Fernando Alonso and Felipe Massa. Instead of giving them Ferrari FFs (too long of a wait list for paying customers), or Ferrari 458 Italias (too impractical), the F1 stars each received a brand new Jeep Grand Cherokee. If you’re puzzled by the tie-in, remember the family tree that Jeep is now part of. The brand falls under Chrysler, which falls under Fiat, and so does Ferrari, Maserati, Alfa Romeo, Lancia and a host of other industry brands.

If you’re guessing that they didn’t receive off-the-shelf Jeeps, you’d be correct. For starters, the Jeeps were SRT8 models, packing 470 horsepower and 465 pound feet of torque. The trucks were dropped an inch and a half for better handling, before being fitted with custom 20-inch wheel. To honor Ferrari, each was sprayed in Rosso Corsa before being trimmed with a matte black roof and gloss black body stripe.

Inside, the seats, door panels, center armrest and instrument surround are finished in red leather, appropriated from Ferrari’s own inventory. Instrument faces are finished in yellow, which links them back to the dials of Ferrari’s GT cars.

Alonso and Massa now have the first two Jeep Grand Cherokees in Europe, while other buyers in the EU will have to wait until summer to get one of their own