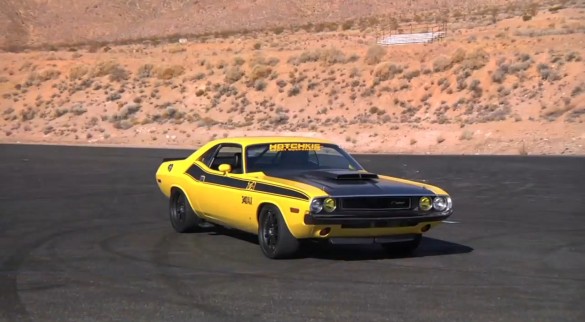 It’s human nature to look at the past with rose-colored glasses, and remember (incorrectly) how good things “used to be.” Take muscle cars, for example: most of us remember them as being stupid fast and punishing to drive, while today’s equivalents somehow seem more docile and user-friendly. In reality, however, today’s muscle cars and pony cars can (generally) kick the crap out of the stuff built four decades ago.

That said, even classic muscle cars can be made to handle, which is the premise behind pro touring. It isn’t an easy or inexpensive build, since nearly every suspension and brake component has to be upgraded to gain even reasonable handling by modern standards. Still, if you’re willing to throw enough time and money at the build, even big cars (like the 1970 Dodge Challenger used by Hotchkiss suspension as a rolling showcase) can be made to handle reasonably well.

It may not be an ideal track car, but Matt Farah seems to enjoy driving it at Willow Springs anyway. Get his take on how well the car works in the video below.