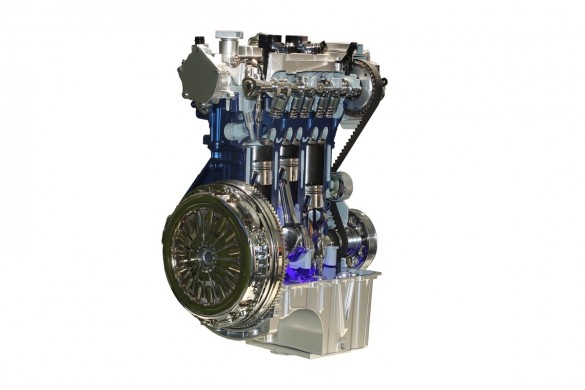 Automobiles with three cylinder engines have long been the butt of jokes among auto enthusiasts. Anyone who’s ever driven a Geo Metro, for example, knows that acceleration wasn’t one of the car’s strengths. It returned amazing fuel economy and offered a fair amount of practicality, but getting from point A to point B in a hurry wasn’t one of its strong points.

Even four-cylinder engines weren’t always enough to keep car guys amused, but automakers have now topped 100 horsepower per liter in normally aspirated engines. Throw some forced induction into the recipe, and suddenly the smaller and lighter engines have serious potential.

That’s Ford’s thinking behind its latest engine, a 1.0-liter, three-cylinder EcoBoost model that’s currently under development. Reports from Autocar, via Left Lane News, say that Ford is pushing to get 177-horsepower from the engine, courtesy of both an electric supercharger and a conventionally spun turbocharger.

While the performance variant probably wouldn’t be a mainstream engine, it could make an appearance in a Focus model slotted below the Focus ST, or in a higher-performance version of the subcompact Fiesta. In more pedestrian trim, Ford is planning on building some 1.3 million units of its three cylinder per year.

Ford is also rumored to be working on a 320 horsepower version of its 2.3-liter four, likely using a similar method of combined forced induction. When it comes to engines, it looks like sixes are the new eights, fours are the new sixes and triples are the new fours. Since less weight equals better handling, we’re good with this plan.