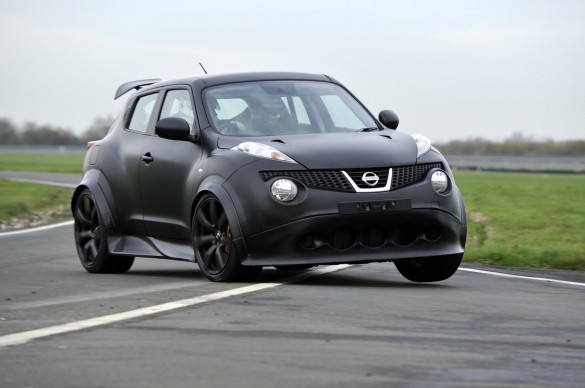 It’s 9:57 at night when you realize that you’re out of coffee for the morning’s brew. The closest grocery store is four miles away, and they close at 10:00 PM. It’s raining outside, and you wonder, momentarily, if you can pull it off in your Range Rover Sport.

If you had a Nissan Juke R in the driveway, you probably wouldn’t even give it a second thought, but (until now, anyway) the Juke R was forbidden fruit, meant only as a “what if” exercise by Nissan U.K. to demonstrate the potential of the Nissan Juke. With 545 horsepower on tap driving all four wheels, the Juke R is capable of embarrassing not only sport tuned crossovers, but some serious performance cars as well. Early videos had the Godzilla grocery-getter outrunning a Lamborghini Gallardo and a Ferrari 458 Italia, something you’re not going to pull off in any other crossover we can name.

Autocar says the production run was prompted by three firm orders, including two from a “high-profile” member of Dubai society. In fact, the Juke R concept proved so popular in Dubai that the prototype would get offers from serious buyers on the street.

No production quantity has been set, but expect the Juke R to be built in sufficient quantity to meet demand. RML, the race shop that built the original prototypes, will be involved in the production of consumer models as well, although it isn’t yet clear where assembly will take place. Pricing hasn’t been set, either, but bear in mind that you’re really buying a hand-built race car, not a production vehicle. Given the work needed to build the concepts, we’d be really surprised if the selling price was any less than $250,000.