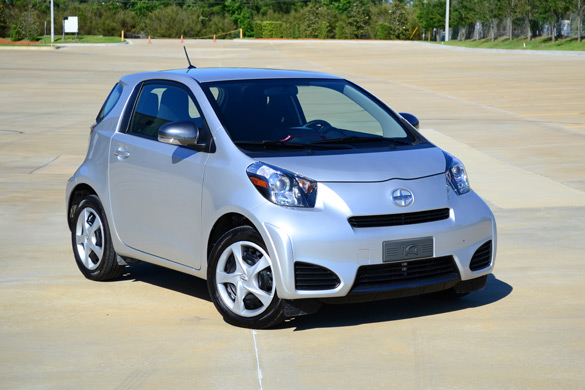 Every time during our so-called gas crisis, which is simply defined as a period of higher-than-normal gas prices, smaller vehicles receive an upswing in merit and sales. One particular vehicle that attempts to keep its new-found unique distinction under all economic conditions, is the new 2012 Scion iQ, the newest and smallest subcompact to join Toyota’s Scion line of cars.

Don’t mistake the new Scion iQ for anything but a Scion iQ. After all, the new iQ is more of an urban expression when pitted against other pocket sized vehicles. The new Scion iQ’s unique style, cute and endearing, will mostly appeal to teens and young adults who have yet to find their proper place in the working society. Having enough space up front for two adults, the two rear seats will rarely see occupants unless it is during one of those late night excursions of toting your tipsy buddy to their resting place for the evening. 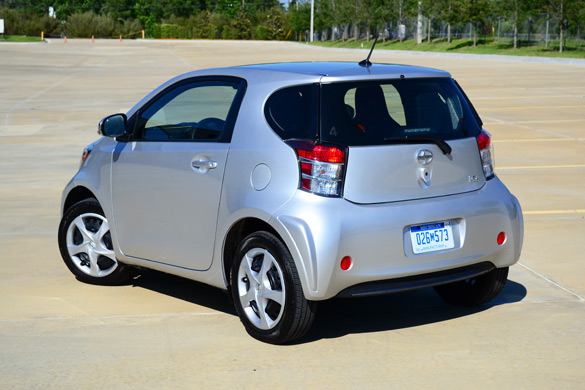 Interior quality, along with fit and finish, is about average. The Scion iQ’s interior never attempts to make a mockery out of plastics, but instead, avoids simulating anything other than what a well-thought out plastic dashboard would consist of. Even the simplistic gauge cluster and consolidated A/C-Heater controls blend into the lackluster themed interior. As a side note, I found the Pioneer stereo head unit seriously lacking depth to the sound that it produced. I also found the narrow-lettered LED menus confusing and in need of additional buttons for control functions. 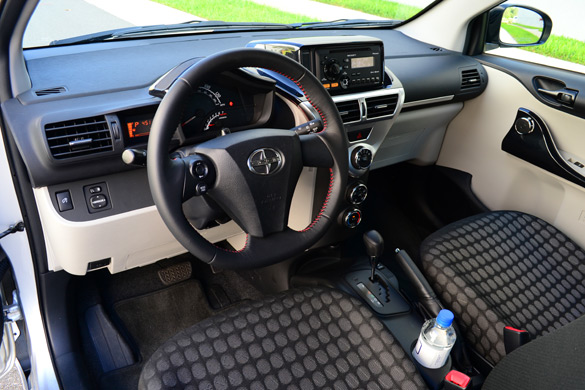 The cheap aspect of the interior remains to be the actual seats themselves. They almost appear to be a large piece of padding molded to your hind-parts. The Leather wrapped steering with red stitching and leather wrapped shifter seem to makeup for the odd pattern design of the not-so-thrilling seats. 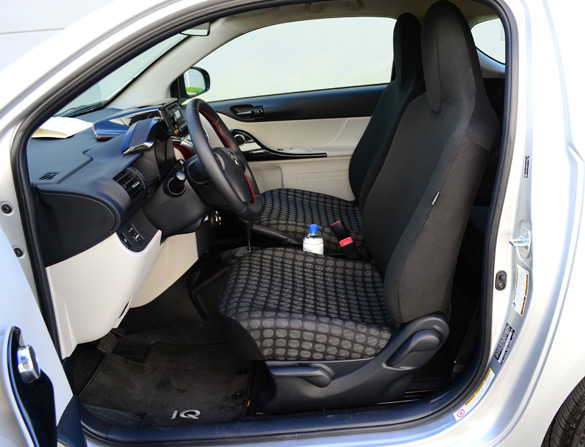 Surprisingly, front seating areas are spacious enough for 6 feet tall adults. The new 2012 Scion iQ goes by the same theme of other pocket-sized vehicles on the market, small looks on the outside but ample space for at least two passengers inside.

Scooting the new Scion iQ along local suburbia roads seems to stress the iQ’s powerplant a little with mounting buzzing sounds as the RPM gauge consistently climbed near redline. With a total of 94 horsepower and 89 ft. lbs. of torque from a 1.3-liter 4-cylinder engine, my expectations remained extremely low in terms of performance. Amazingly, the new iQ scoots along pretty good on back roads due to its low curb weight of only 2,127 pounds. Just don’t expect to win any races, even if it is against one of your buddies on his/her new mountain bike.

EPA fuel consumption figures for the new iQ are 36 mpg city and 37 mpg highway. Even though I was nearly redlining the small 4-cylinder on short suburban backroads, the LCD digital gas gauge did not lose any one of its 6 level indicators until I reached a total of 76 miles on the trip odometer. 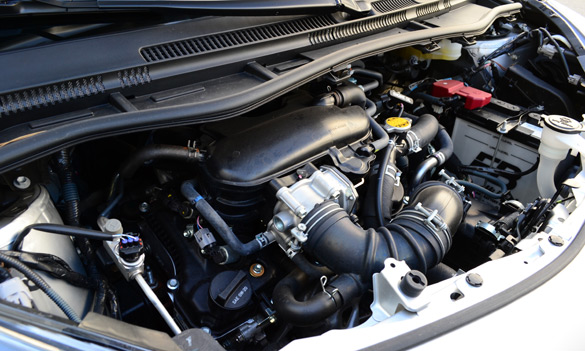 What little bit of grunt that you get from the smallish 4-banger, is somewhat sapped by the continuously variable transmission (CVT). In a way I can understand Toyota’s choice for such an engine-transmission combination. The iQ’s ‘iQ’ shines when it comes to the programming of the CVT unit extracting every bit of that 94 horsepower. Cleverly, unlike many CVT’s on the market, the iQ’s ‘intelligent’ CVT tends to have automated shifting points during and near full throttle. Basically, under heavy loads, the continuously variable transmission will lower the engine speed in 1000 rpm increments as if was actually shifting gears instead of gradually adjusting a pulley. This actually gives the iQ extra oomph in acceleration. Although, all you are going to get is a 0-60 mph time of 11.6 seconds.

Let’s face it, the majority of subcompacts hardly ever grace the racetrack with their presence due to their lacking ability to handle well. Although the Scion iQ is no exception, it proves to be predictable and safe. The only time I lost my confidence on the Scion iQ’s ability to at least prove it was competent on town roads, was during heavy braking. 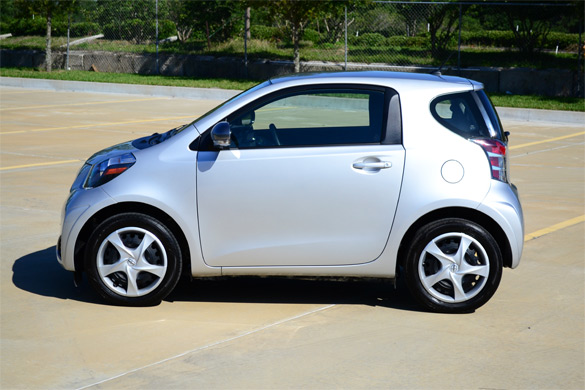 My Scion iQ test vehicle tended to have an unsettling unevenness and pull to one side when braking heavily. The only time that the iQ corrected itself under hard braking was when the ABS (antilock braking system) took over preventing wheel lockup and a call to the insurance company.

Despite having an extremely short wheelbase of only 78.7 inches, the new Scion iQ rides well for a subcompact. The soft suspension does tend to give and bend like a sponge under acceleration and braking, further diminishing my level of confidence in the iQ’s road prowess. Though, the short wheelbase allows the iQ to almost literally turn on a dime where you only need two lanes to spin the vehicle around in complete 180 degree turns. I even had my neighbors laughing when testing how well the iQ is able to make a U-turn down my driveway. 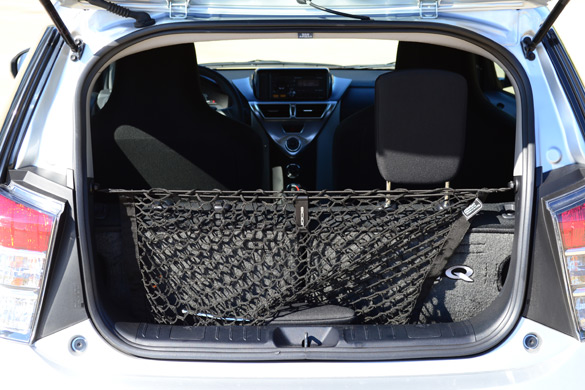 Hauling your stuff in the back of the iQ can actually be a simple task considering how the cargo space expands to over 16 cubic feet when you fold the 50/50 split rear seatbacks. There is no glovebox, but you can make clever use of rear cup holders like I did for your loose items.

Subcompact cars tend to get a bad rep when it comes to safety on the sole perception of their size. Obviously, you cannot change the size of the new Scion iQ so Toyota took safety to a new level by adding airbags in areas normally not found on other vehicles, let alone subcompacts. In addition to the required airbags, the Scion iQ gets knee airbags, front seat cushion airbags and a rear window airbag that deploy around the rear seat headrests. The standard traction control and stability control tend to intervene early when it detects the short iQ getting out of line, if you are brave enough to do such a thing. 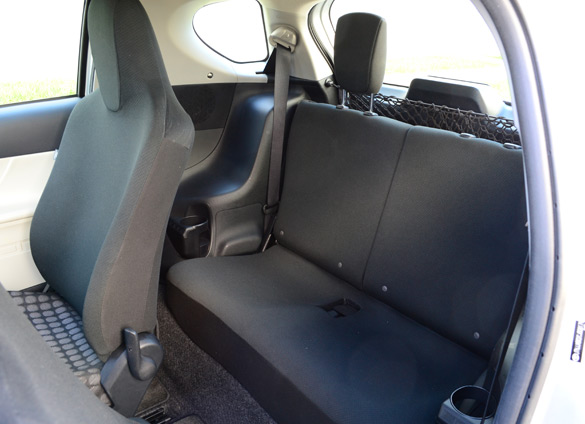 In all, the new 2012 Scion iQ brings about a unique character for the Scion line of vehicles. A base price of $15,265 plus destination charges will get you into a new 2012 Scion iQ. There is only one trim level and no official factory options. However, there are ‘catalog options’ such as a touch-screen navigation system along with optional 16-inch alloy wheels, in place of the 16-inch steel wheels and hubcaps on my tester, and long list of other dealer-installed urban-centric add-ons. Some of these add-ons include illuminated door sills, interior lighting kit, fog lights and a premium sound system as part of the navigation unit. Moreover, the aftermarket’s plentiful offerings for Scion vehicles, now including the new iQ, begs you to ‘pimp your ride’ in an eccentric urban fashion, which proves again the iQ’s specific demographics.