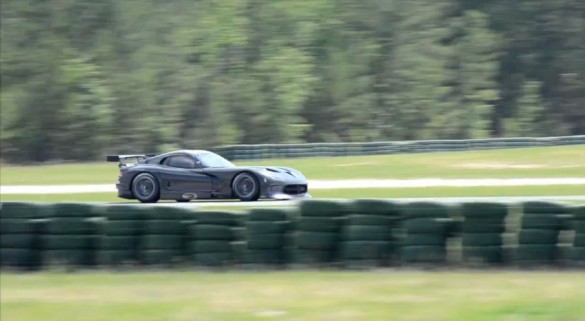 As soon as the new SRT Viper was introduced at this year’s New York Auto Show, SRT head Ralph Gilles announced the car was going racing, too, and would debut before the end of the 2012 season. Calling that ambitious is an understatement, since it generally takes months of sorting, testing and development to go from production car to production-based race car.

As this video shows, SRT hasn’t been wasting a second of time since the New York Auto Show. In the words of Beth Paretta, director of marketing and operations for the SRT brand and motorsports, “The first on-track test of the new SRT Viper GTS-R went extremely well. Even after all the hard work by the team, it’s still incredible how fast everything has come together in the development process.”

Riley Technologies has been doing the development work on the racing Viper, and even in initial testing the car has exceeded expectations. That’s not to say the program is ready for prime time just yet, as several more track development sessions are planned prior to the Viper GTS-R’s racing debut. The first test proved that all systems worked as intended, but now comes the difficult steps of adding speed and ensuring the durability needed for racing.