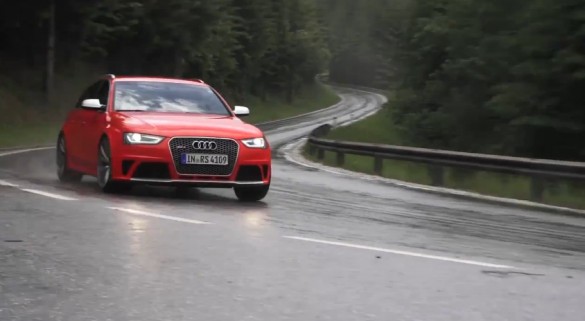 Americans, we’re told, don’t buy station wagons. When we need family haulers, we’re inclined to buy bloated and driving-enjoyment-void SUVs, or even worse, their boiled-down-to-remove-capabilities descendants, crossover vehicles. Perhaps it’s the romantic notion of Westward Expansion; as Americans, we want the ability to jump into out contemporary covered wagons and head out to the Oregon Trail, even if we never actually do so.

Europeans aren’t saddled with this cultural baggage, and in exchange get rewarded with a plethora of fast and entertaining station wagons. Audi’s original RS4, launched in 2000 and built for just two years, asked the question, “why can’t family haulers serve up AWD traction and serious driving fun, too?”

As Chris Harris points out, the original B5 RS4 had a great engine, but was compromised by a harsh suspension, oversensitive brakes and numb steering; in short, it was a good car that just missed the mark on being a great car.

Enter the B7 version of the Audi RS4 wagon, launched in 2006 and built until 2008. Instead of the original’s biturbo V-6, the new version packed a normally aspirated V8 with a surprisingly high redline of 8,000 rpm. While the B7 featured a markedly improved suspension, steering and brakes, it’s engine lacked torque down low, forcing drivers to wind it out to make power.

This year, Audi is launching an all new RS4, available with a dizzying array of electro-gizmos. As Harris points out, none of these really help the driving dynamics of the car; while the B7 RS4 felt sorted, the new version feels overly complex, and still suffers from the same lack of torque as the previous version. It’s a step forward, but not necessarily a step in the right direction.

Alternatively, there’s the Mercedes-Benz C63 AMG Wagon, in Europe anyway. It lacks the traction-enhancing stability of AWD, but presents itself as a German-built muscle car. As Harris puts it, the C63 AMG is “dripping with magic,” even though you pay a premium price for it.

Frankly, we need more cars like that in the United States. Too many sold here are dripping with blandness, snapped up by buyers who see driving as a tedious chore and not something to be enjoyed.