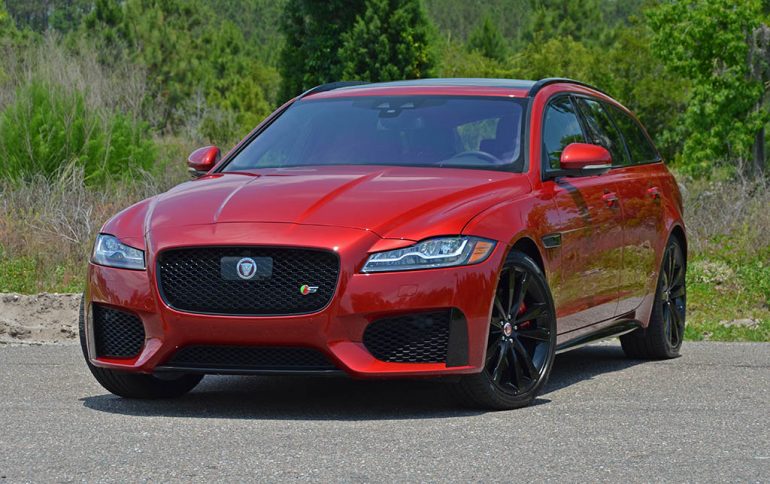 I could remember the days that station wagons were a “cool” thing and wood panels suited the exterior of such just like a briefcase accompanied business-clad white-collar workers in the 80s. The pastimes of the infamous station wagon are long gone, but the passion in its versatility that doesn’t compromise to become a tall-stature crossover or SUV has been brought back in a handful of stylish iterations. One form that the British have brought to the modern-day market is Jaguar’s midsized XF in what they dub the XF Sportbrake.

The all-new Jaguar XF Sportbrake is, in my opinion, one of the best-looking wagon-types that exudes an elegantly styled yet roomy back-end with ample cargo space. Moreover, the XF Sportbrake retains the already appeasing sleek looks of the XF Sedan up front. Jaguar went the distance to do justice to the XF Sportbrake to captivate an audience that has been void of the excitement that a wagon in a “car” form brings to the table over today’s popularized SUV or crossover utility vehicle. 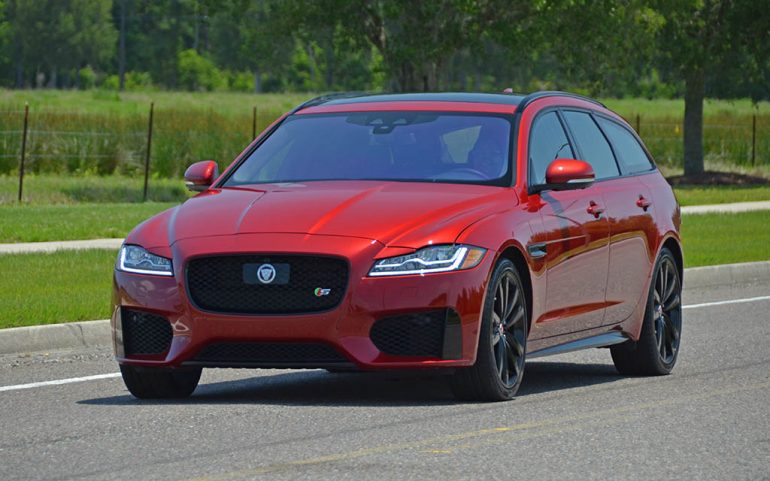 Keeping with what works, Jaguar equipped the new XF Sportbrake with most of what can be had in the XF. My fine example of a wagon test vehicle, outfitted in the XF Sportbrake “S” trim level, one of two trim levels, doesn’t depart far from its decently-performing XF Sedan sibling. In fact, despite the XF Sportbrake having a much bigger rump to admire, the way in which it handles itself isn’t notably different from the XF Sedan of the same trim level. 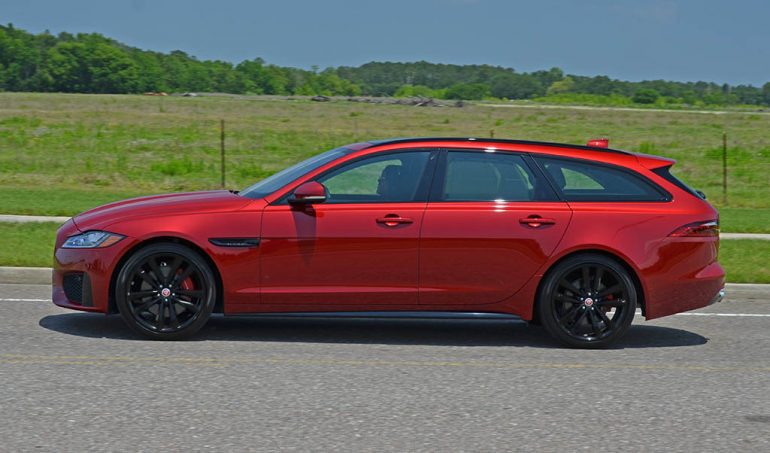 Doing the duties of keeping the XF S Sportbrake up to par with its closely-matched sedan sibling is the job of Jaguar’s proven 3.0-liter Supercharged V6 engine with 380 horsepower at 6,500 rpm and 332 lb-ft of torque at 4,500 rpm. The Supercharged V6 comes mated to an 8-speed automatic transmission. When the 8-speed transmission is in the proper gearing things stay lively, and the sporty nature of the XF S Sportbrake becomes surprising and pleasing for a vehicle with such a big butt that adds about 165 pounds to the curb weight over a similarly-equipped XF sedan. Supposedly, ‘big butts’ are the in-thing these days – for us automotive enthusiasts, anyway. 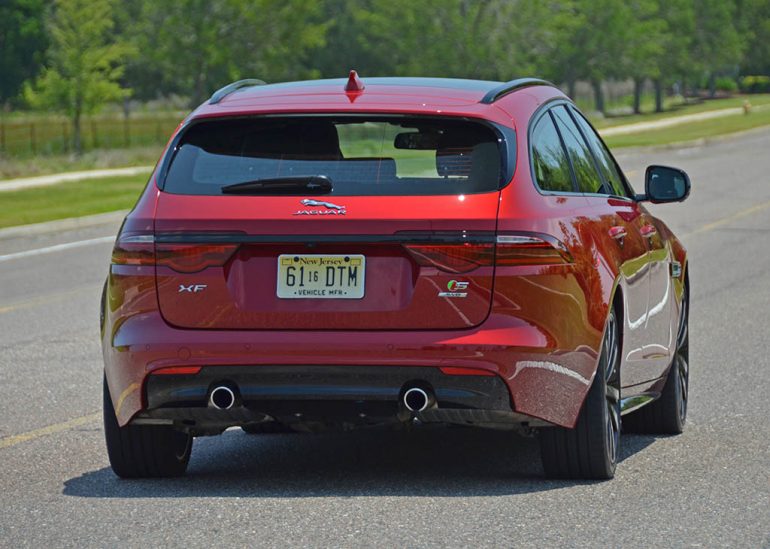 The 20-inch wheels wrapped in meaty 255/35-series all-season rubber all grapple at the pavement in my XF S Sportbrake All-wheel-drive test vehicle in a hurry to get the stately wagon up to 60 mph from a standstill in about 5.3 seconds, the same as the XF S AWD sedan. The dash to 60 mph or beyond is done without drama, and the 8-speed automatic transmission does a respectable job to keep things moving in the right direction. However, the 8-speed automatic tends to take its time in making downshifts when the vehicle is already in motion and power is demanded immediately. Most of the time, the transmission felt as if it needed a second or two to land in the proper gear before the Supercharged V6 whistled its way to the powerful mid-throttle sweet spots. Otherwise, the XF S Sportbrake performs well for a wagon, probably better than it deserves where its stable and nicely-planted chassis could handle much more power and push into turns faster than you would initially think. The steering feel is decent, as it mimics most of what you find in the Supercharged V6 XF S Sedan, an overall delightful driving experience. 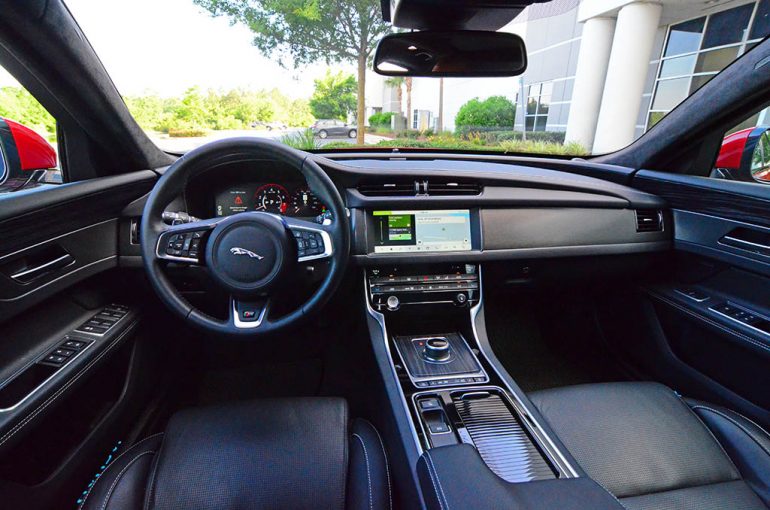 Apart from the tasteful style of the XF S Sportbrake, the interior exhibits a duplicated page from the XF sedan line, but things are obviously changed up as you go back past the rear seating area. The cargo area, as you can guess, has a lot more space, 12 more cubic feet over the sedan. The rear seating can be folded flat to open up the cargo space to as much as 69.7 cubic feet all accessed by a power hatch, or ‘liftgate’ for you SUV/Crossover aficionados. Rivaling many crossovers in its cargo capacity, the XF S Sportbrake makes a convincing case to make the move to a wagon, if for anything – to get its good looks and more sports sedan-like performance in a low-slung, beautifully-sculpted body that you can’t get in a crossover. 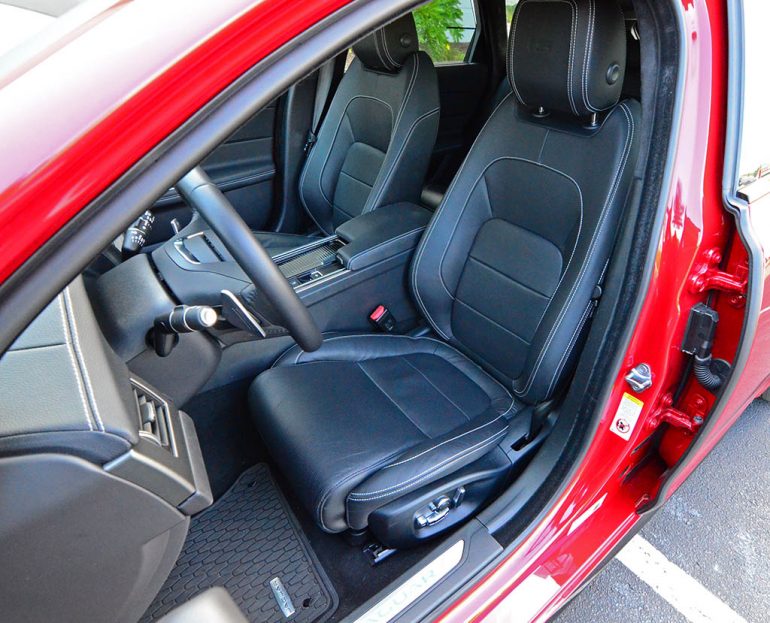 Taking on the full bevy of luxury amenities and feature sets that you find on the XF S Sedan, the XF S Sportbrake copies over the same list that Jaguar offers in the top-level trim. The drawbacks for the Jaguar XF S Sportbrake, which mostly mimic that of the XF sedan, is the rather stiffly-padded seats and the disconcerting operation of the infotainment system. In my quest of driving many vehicles, which include the full line of Jaguar/Land Rover vehicles, the Jaguar brand still suffers from accomplishing a completely seamless experience when it comes to technology and its touchscreen infotainment system. To summarize, Jaguar’s latest infotainment in the XF responds quickly to inputs once it is fully booted but fails to be consistent in its operation with a few faults at times. It’s almost as if at least one feature decides not to work within a two-day time span. Moreover, my loaded-up Jaguar XF S Sportbrake test vehicle includes a 360-degree camera system that isn’t even accessible when going in reverse. The 360-camera display can only be summoned when in drive. I won’t divulge into other small caveats when using Jaguar’s electronics. Just know, they can do better. 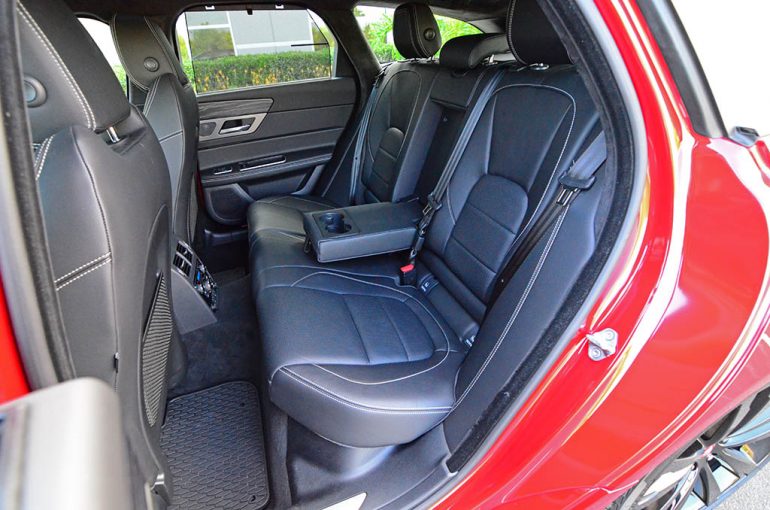 Somewhat making up for any electronic bugs or shortcomings, the Jaguar XF S Sportbrake combines a multitude of active safety features that work when they are needed without fail, such as the lane departure/lane keep assist systems, blind spot monitor, forward collision warning and mitigation, and the welcomed adaptive cruise control system. The remarkably-bright LED headlights with auto highbeam assist and rear LED tail lights with rear fog lights all complete the safety identity of the Jaguar XF S Sportbrake. 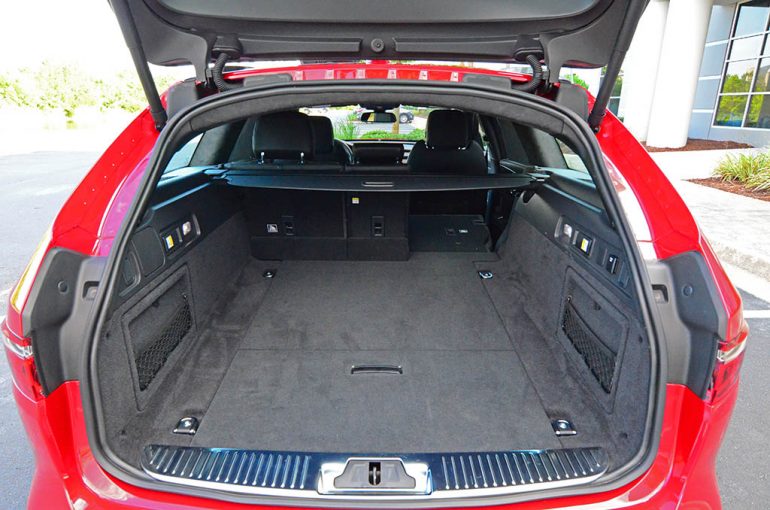 Getting into the new-age wagon foray appears to be a methodical approach by many automakers, mostly within the luxury realm. The Jaguar XF S Sportbrake appears to offer something a little different where the Sportbrake/Wagon design is one of the more attractive offerings in such a niche segment. The only drawback for some may be the fact that the Jaguar XF S Sportbrake is only available in the S AWD trim or First Edition trim, trim levels that are tiered at the upper echelon for the XF line and therefore starts at a price of $70,450. Piling on most of the available options outside of the limited Sportbrake First Edition, the Jaguar S Sportbrake AWD will quickly climb to the as-tested price of $84,815. By the “looks” of it, if you want to be among the unique in the form of one of the best looking modern-day-wagons, you must pay to play for this pouncing cat.