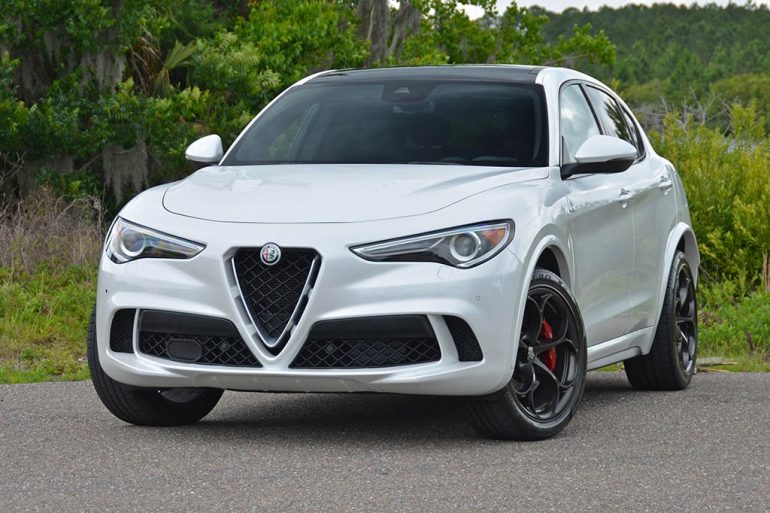 If the craze over crossover utility vehicles and SUVs alike demonstrates anything from today’s American culture, its that we want our cake, and we want to eat it, too. With that said, it’s no wonder that there are rare times that we are graced with a crossover utility vehicle that has stunning style, versatility, a taste of luxury, and near-exotic-car performance. Such a formula is embodied in a handful of crossover vehicles, including the all-new Alfa Romeo Stelvio Quadrifoglio, which gets its name from the famed dream mountainous driving roads of northern Italy known as the Stelvio mountain pass.

The new 2018 Alfa Romeo Stelvio has embraced us with an Italian flare that is deserving of a closer look next to many of the mundane grouping of crossovers that too often mimic their boring car counterparts. The new Stelvio, in its base forms with a well-to-do 280-horsepower 2.0-liter turbocharged engine, is quite the head-turner with the proper crossover goods that Americans are seeking in record numbers. When it comes to the Stelvio Q4 Quadrifoglio variant, things start to get very exciting in the sense of a 505-horsepower at 6,500 rpm and 443 ft-lbs of torque that peaks from 2,500 rpm to 5,000 rpm – all from a 90-degree 2.9-liter twin turbo V6 engine. The engine is the stuff of dreams with the only drawback being a second of turbo lag out of the hole that is later overshadowed by a surging rush of relentless smooth power all the way to its 6,500 rpm redline. The snappy shifts from the 8-speed automatic transmission or also quite satisfying with loudly-repeated burble exhaust gasps from the turbos wastegate. 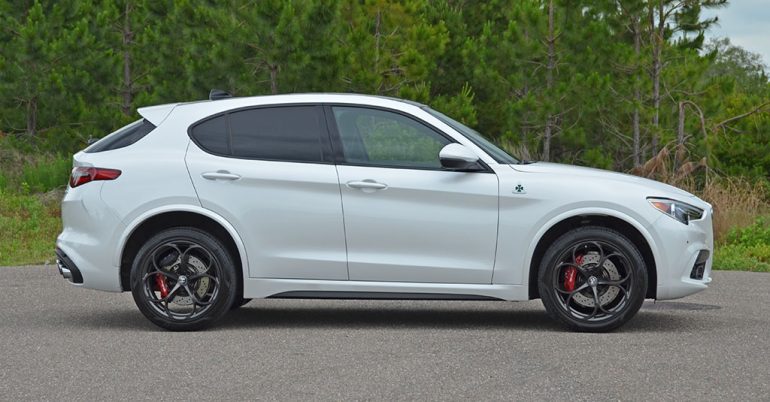 If the Alfa Romeo Stelvio Quadrifoglio engine at all sounds familiar, it should, because it’s the same unit from the Alfa Romeo Giulia Quadrifoglio, which we had the pleasure of experiencing just after its introduction to our shorelines. Being that Alfa Romeo has been re-introduced do the American market, many have no clue what they are observing when the new Stelvio Quadrifoglio passes them by, and it does just that considering it can reach 60 mph in just 3.6 seconds, which is about 0.2 seconds faster than its Giulia Quadrifoglio sedan sibling, mostly thanks to the Stelvio’s all-wheel-drive system. 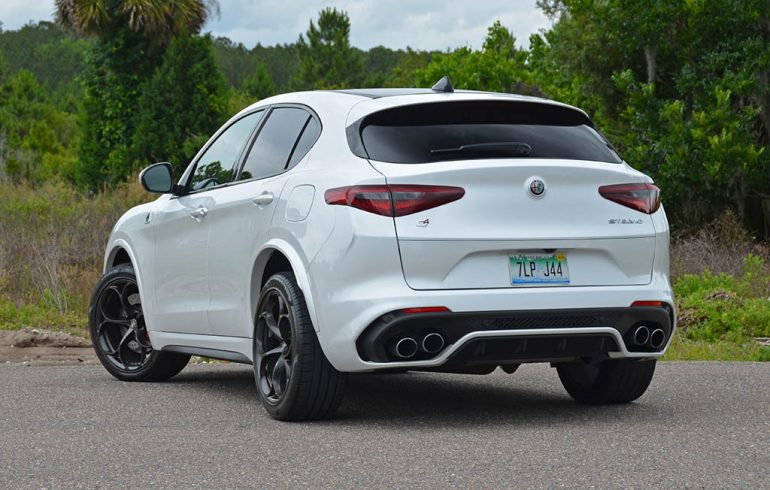 Claiming fame as the quickest production SUV around, at least around the Nürburgring at the time of its launch, the Stelvio Quadrifoglio is not only a stunner visually but one that appeases hardcore enthusiasts with a serious kick in the rear. Clawing at all fours, the Stelvio Quadrifoglio, or Q4, has a narrow field of competition only found in vehicles like the new Porsche Macan Turbo or the Mercedes-AMG GLC63 S. While all these hot crossovers beg to be a jack of all trades, there is a pitfall of not mastering the task of an exotic vehicle. Fundamentally, the Stelvio Quadrifoglio serves as a single vehicle to put a smile on the face of everyone in the family, at the same time – exotics simply do such two at a time with limited cargo capacity and some seriously sacrifice long-distance comfort. 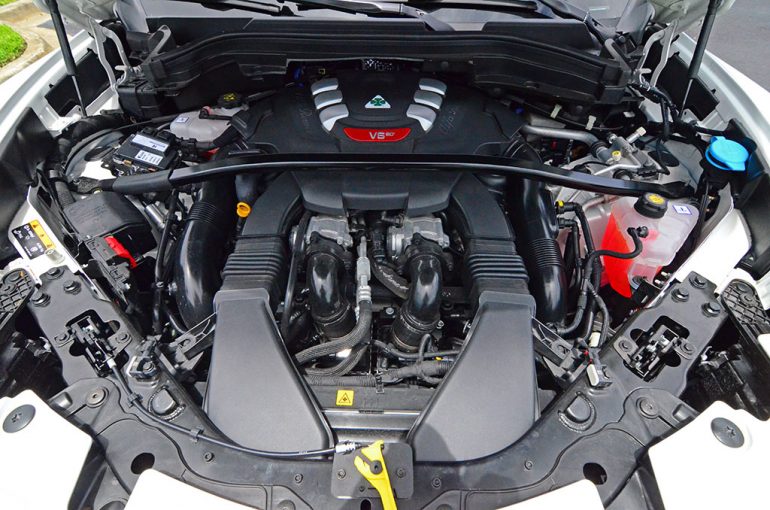 In having plentiful quality time with the new Stelvio Quadrifoglio, I can honestly admit to Alfa Romeo being a surprise over my favoritism of the Germans for building delightful performance-oriented crossovers. Most of the driving dynamics of the new Stelvio Quadrifoglio are wonderfully pleasing to my enthusiast senses with just a couple exceptions being the braking feel and a cumbersome start-stop system, which can be disabled upon each startup of the vehicle if you so desire.

The driving modes of the Stelvio Quadrifoglio, a page taken from the Giulia Quadrifoglio, is what’s called its “dna”: A – Advanced efficiency, N – Natural mode, D – Dynamic mode, and a special Race mode that completely disables stability and traction control but opens the exhaust valves for a louder rumble out back and places the adaptive dampers in their most aggressive setting. Speaking of the suspension dampers, they are a three-mode system that on its softest setting returns a decent ride quality that soaks up road imperfections quite nicely. The mid damper level has subtle stuffiness added, while the most aggressive mode, which is automatically dialed up in Race (can be switched separately to mid-level in Race mode), is pretty rough and may beat you up on public roads. 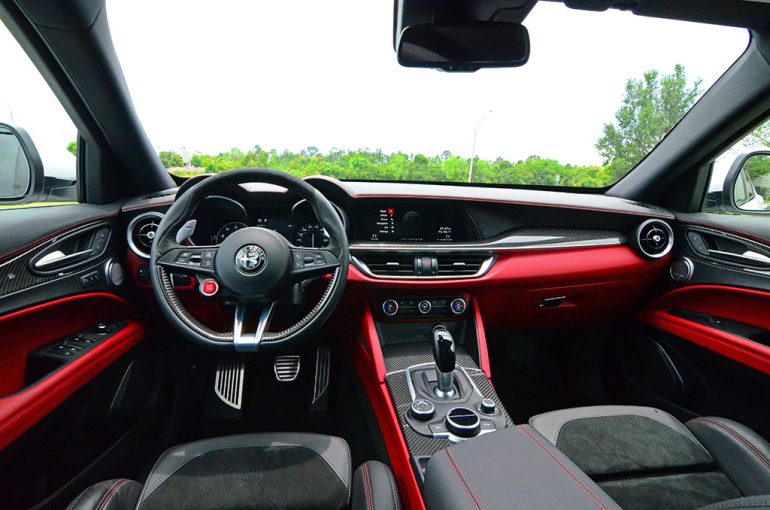 The Stelvio Quadrifoglio’s brakes, just like its Giulia Quadrifoglio sibling’s brakes, are a by-wire system and are void of any feedback or natural feel. For the most part, the braking, which is otherwise good with 6-piston calipers up front and 4-piston in the rear clamping down on cross-drilled rotors, feels as if you’re using a video gaming setup that has no point of reference. The only added value in the Stelvio Quadrifoglio’s brakes for reference is the abundance of negative G-forces you feel when coming to a stop. Adding insult to injury, the braking is cumbersome when creeping along and allowing the 8-speed automatic transmission and torque converter do their job to move the vehicle along without application of the gas. Most of this process feels almost as if you’re driving a dual-clutch unit that requires slipping of its automated clutch to engage first gear. Moreover, the start-stop system is sometimes slow to respond and is among the most unsatisfying in knowing you’re not saving much fuel on top of the already lackluster fuel economy of 17 mpg city, 23 mpg highway, and 19 mpg combined. Though, the fuel efficiency is mostly consistent and becomes expectant where I saw tanks last under 300 miles. 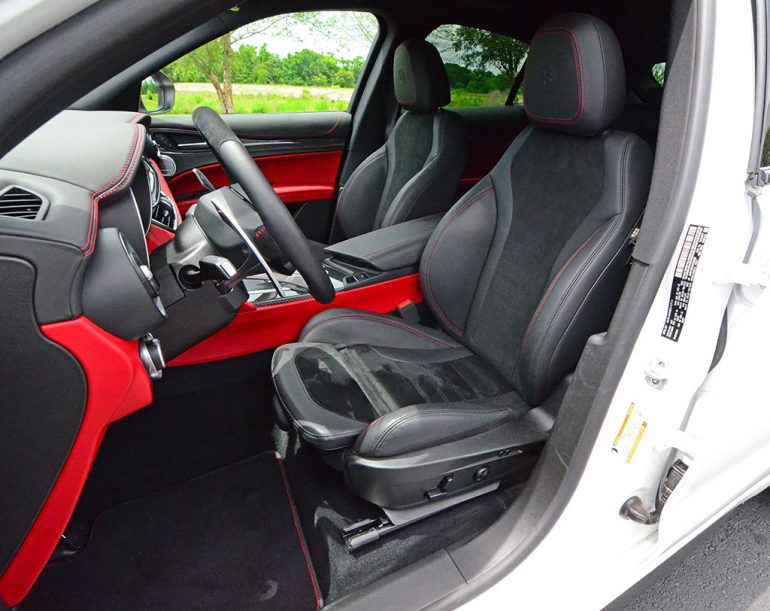 The collective of what the Alfa Romeo Stelvio is, makes for a compelling buy where you have more cargo room, headroom, and versatility in a stout package over a comparable luxury sports sedan. Such a combination isn’t readily available as many would think considering how many new crossover utility vehicles have been injected into the automotive market as of late. Many just don’t meet the level of shear performance found in the Stelvio Quadrifoglio.

For the most part, the compact-ish size of the Stelvio isn’t compromised with small seating areas as there is just enough space for most combined with supportive seats with the proper aggressive bolstering, Alcantara suede-like seat surfaces, and easy-to-find seating positions up front. The seat adjustments are somewhat limited by the Stelvio Quadrifoglio’ s 8-way power adjustment for the driver’s seat. Out back, the seating area is just enough for two adults and one child in the center, but I wouldn’t push anywhere past someone who is close to 6-feet tall with long legs as they may find some limitations with only 31.9 inches of rear legroom. Cargo space, accessed by a power liftgate, is also somewhat limited with just 18.5 cubic feet with the rear seats up and up to 56.5 cubic feet in folding the 60/40 seat backs down. 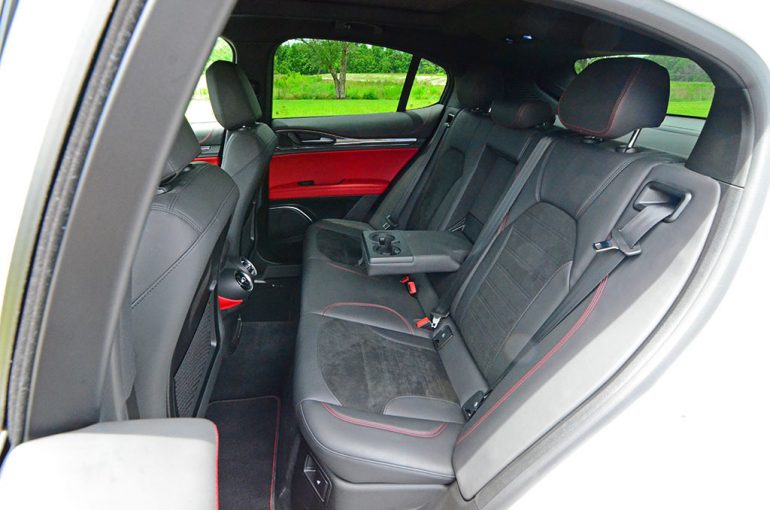 The suite of electronics is abundant, including the optional Driver Assist Dynamic Plus Package, which combines adaptive cruise control, forward collision warning w/auto braking, lane departure warning, automatic high beams, and an infrared windshield. The infotainment unit, while it responds quickly to its simplistic control inputs from a central joystick-like turn knob, could use some polishing with a better-quality screen that’s brighter and has a higher resolution. Moreover, the system has an off-kilter learning curve that will require extended seat time in the driveway or parking lot to completely master without later becoming a distraction when driving. Otherwise, there is the availability of Apple CarPlay and Android Auto, both equipped on my loaded-up test vehicle. 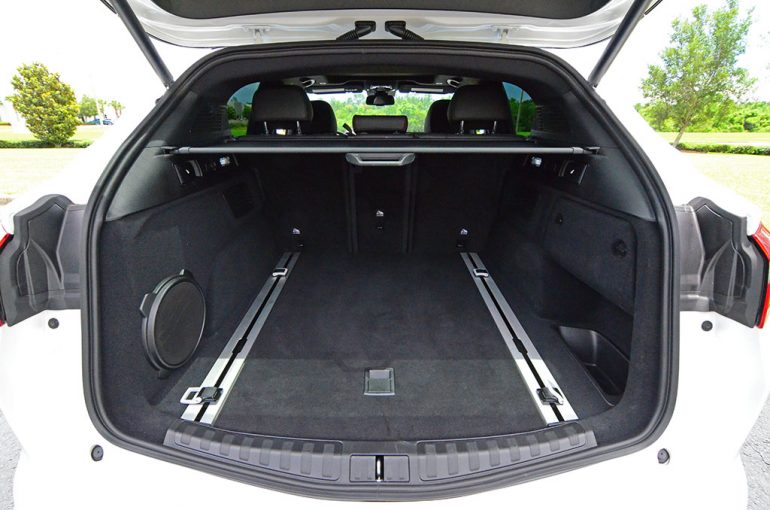 The subtle touches inside and out, including the Italian styled 20-inch wheels wrapped by 255/45R20 front, 285/40R20 rear Pirelli P Zero tires, unique Alfa Romeo facias, carbon fiber interior trim, and accented red stitching throughout the cabin including the optional black seats with red stitching, all bring out the exclusive sporty character of the Stelvio Quadrifoglio. Those who want stunning performance and something especially unique in a crossover without compromising much within the compact luxury accommodations will find the new Alfa Romeo Stelvio Quadrifoglio quite the package.