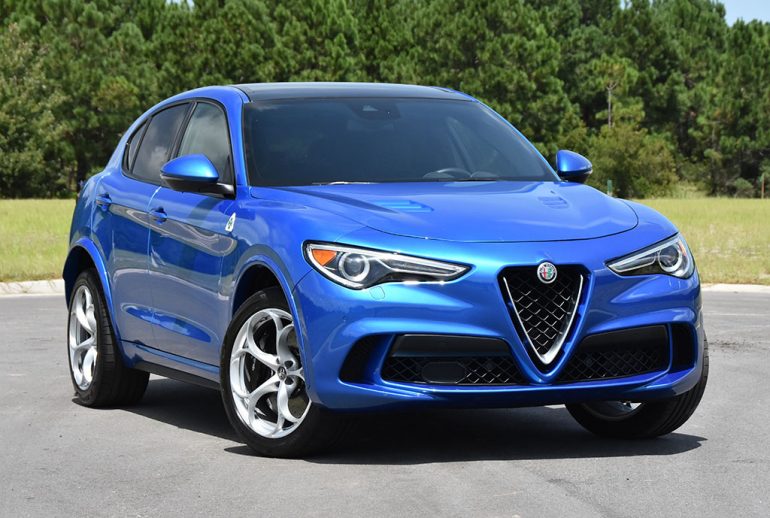 Italian cars have an undeniable flair about them that is often considered as flamboyant, somewhat depending on its color. Regardless of color, when it comes to an Italian vehicle, people notice, and that’s just what they did everywhere I drove the latest Alfa Romeo Stelvio Quadrifoglio (QV), which is the performance variation of the new Italian crossover beast.

The unique styling of the Alfa Romeo lineup, including the new Giulia sedan, is refreshing for our American shores. Praising the FCA brand for reintroducing Alfa Romeo to us has been an ongoing effort of those in-the-know since the on-rails 4C was introduced and later the Giulia sedan, and now, a Stelvio crossover to appease the masses. 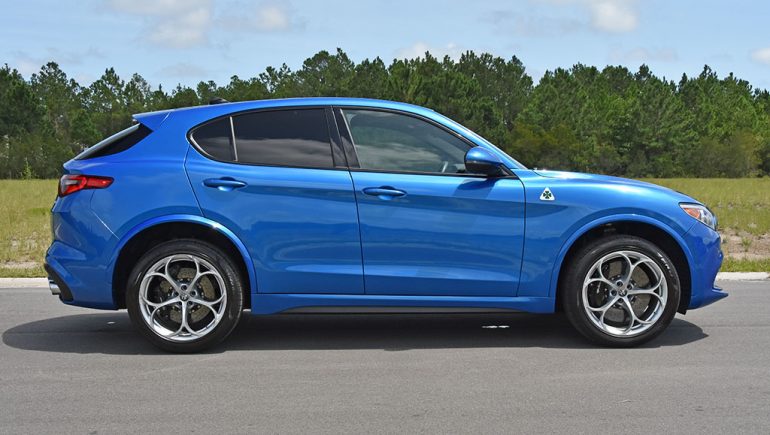 The Alfa Romeo Stelvio, first introduced a few years ago as a 2018 model year, fundamentally elevates the Giulia sedan, vertically. By taking what is loved about the unique Giulia sedan and basically forming it into a crossover utility vehicle with its higher ride height and large cargo area, is a good move by FCA. Furthering a good move is the idea of taking the road-thrashing Giulia Quadrifoglio and all that’s exotic and birth a Stelvio Quadrifoglio, which features basically the same powertrain only with all-wheel-drive. 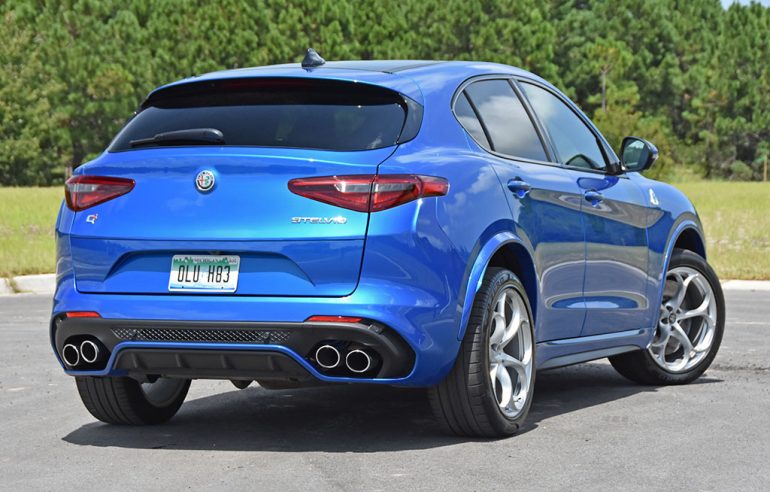 Powered by what is similar to Ferrari’s V8 engine only less two cylinders, the Stelvio Quadrifoglio gets one of the best V6 engines on the market, a twin-turbo 2.9-liter unit that begs you to rev it to its redline and beyond to extract all of its 505 horsepower and 443 pound-feet of torque. Zero to 60 mph comes at you quick, about 3.6 seconds if you power-brake out of the hole. Unfortunately, there is no launch mode, which would benefit the Stelvio Quadrifoglio due to it having a bit of turbo lag. 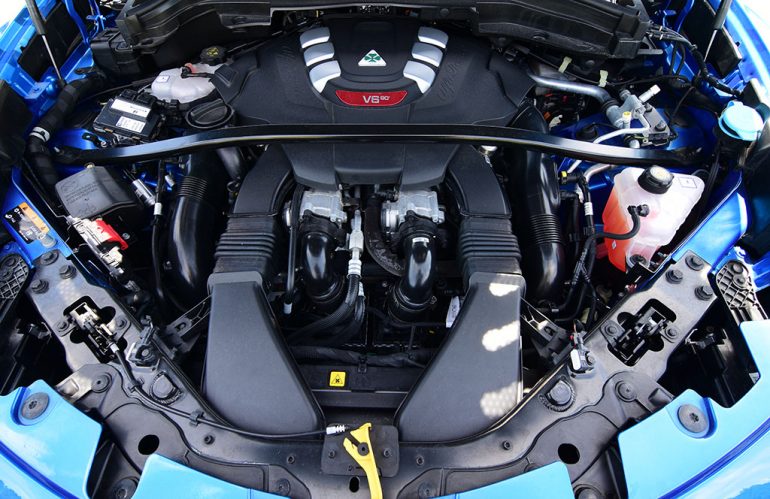 The Italian stallion-derived engine in the Stelvio Quadrifoglio is a masterpiece that’s only hindered by a taste of turbo lag until you hit about 2,500 rpm. Once things get moving, the engine purrs while the 8-speed automatic transmission fires of quick shifts followed by a fluttering exhaust note. Everything about the engine that I enjoyed a few years back in driving the Giulia and Stelvio Quadrifoglio trims returns only with some interior improvements and refreshing. 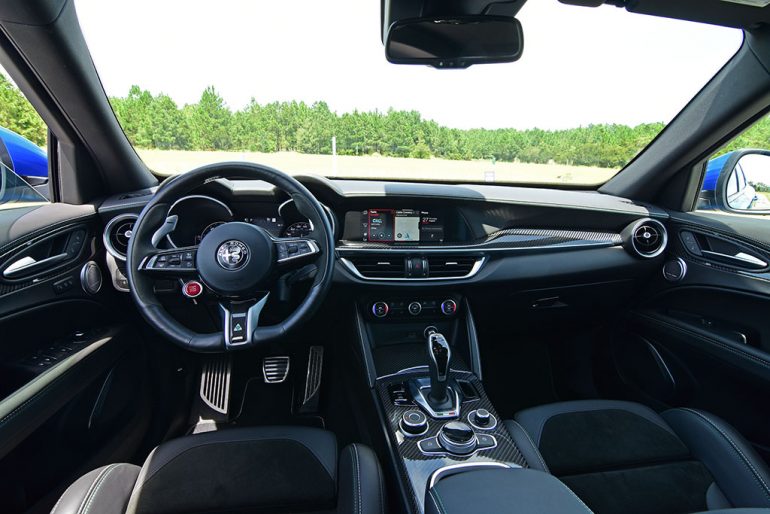 For the 2020 model year, Alfa Romeo makes a few improvements on the inside of the Stelvio Quadrifoglio. There are some welcomed standard tech features now included, and the infotainment system is upgraded with a new 8.8-inch touchscreen unit. Also, the new Stelvio Quadrifoglio gets some unique treatments with single-lined green-accented stitching throughout next to white stitching that subtlety adds additional Italian touches to remind you that you’re in something special – and that it is. Otherwise, much of what was first introduced for the Stelvio remains for the 2020 model year, including its sharp steering, assuring driving character, astonishing engine, good ride quality with the proper adaptive damper settings, and four unique drive modes as part of its “DNA” Pro Drive Modes (Dynamic, Natural, and Advanced Efficiency). Also, there’s a Race drive mode that disables stability and traction control and puts the dampers into an ultra-firm setting. For the 2020 model year, I did notice that Alfa Romeo allowed the Dynamic mode to open up the exhaust system baffles for a steady flow of its intoxicating sound at any RPM. Normally, the exhaust opened in Race mode and during near full throttle applications. Now, it’s nice to have the many active safety features on in the Dynamic drive mode but still enjoy the exhaust opened up at all times. Race mode was a little dicey as it disabled EVERYTHING, and it was just you, the 4,300-pound Stelvio Quadrifoglio, and four Italian powered wheels wrapped with Pirelli P-Zero rubber planted on pavement. 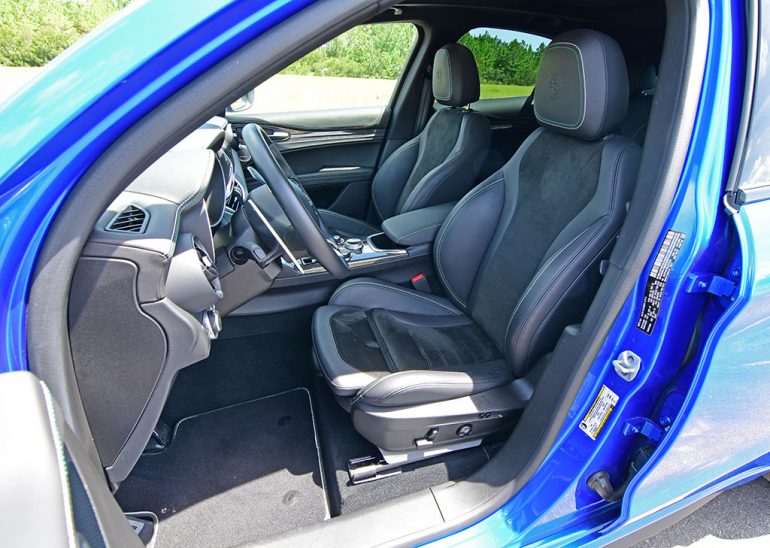 The one downfall of the Alfa Romeo Stelvio Quadrifoglio remains, and that is the braking feel. The brake-by-wire system still fails to provide any decent pedal feel and is quite a mixed bag when you nearly come to a stop – or when you stop and then release the pedal. The pedal feels awful, and there is no reference of engagement to learn, which is a shame because the braking is quite strong, even more so in my test vehicle being equipped with the optional $8,000 Brembo Carbon Ceramic brakes. 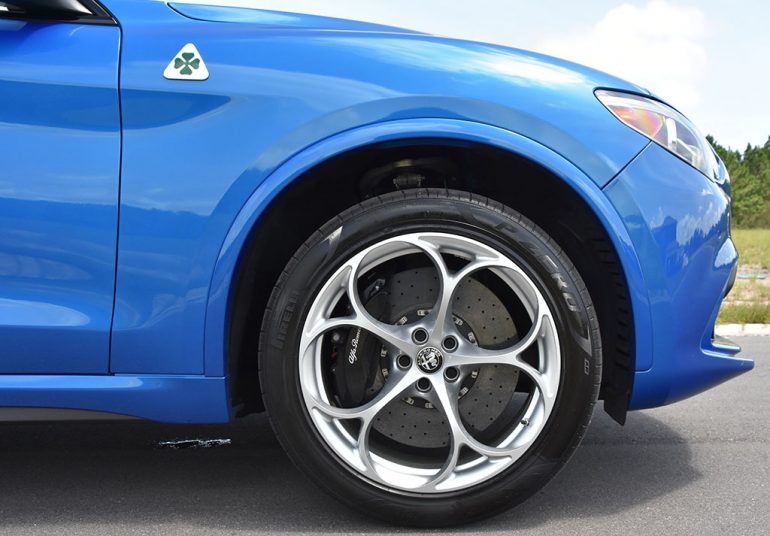 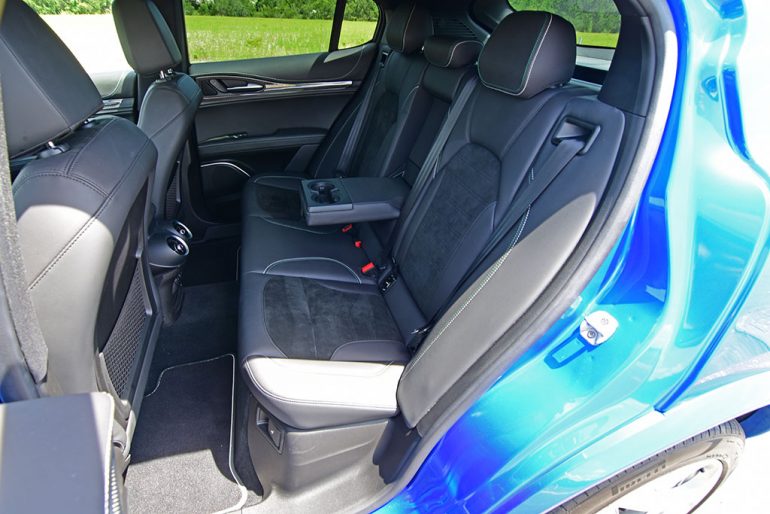 The updates for the 2020 Alfa Romeo Stelvio Quadrifoglio are welcomed, and I am happy that a good formula was left to its paces with its true Italian roots in the powertrain. The Italian styling only adds to the appeal of the Stelvio Quadrifoglio with its 20-inch forged 5-hole silver wheels. They look quite awesome, and Italian, contrasting with my test vehicle’s Misano Blue Metallic Paint. 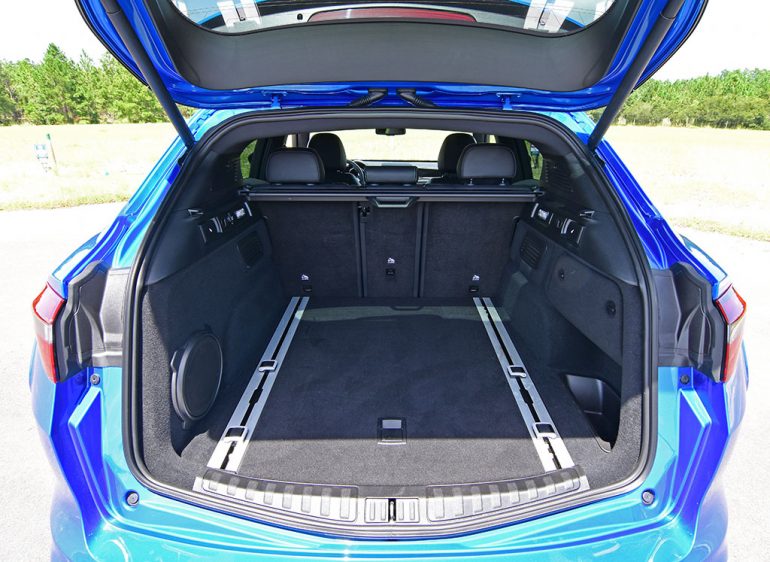 Pricing for the Stelvio Quadrifoglio starts at $80,445 but can quickly rise higher to about $95,690 if you load it up as like my test vehicle, which includes the unique paint color, Package 25P for all of the active safety goodies, and ability to read traffic signs, a dual-pane sunroof, heated second-row seats, carbon fiber and Alcantara-trimmed steering wheel, security and convenience package, wireless charging pad, and the carbon-ceramic brakes.