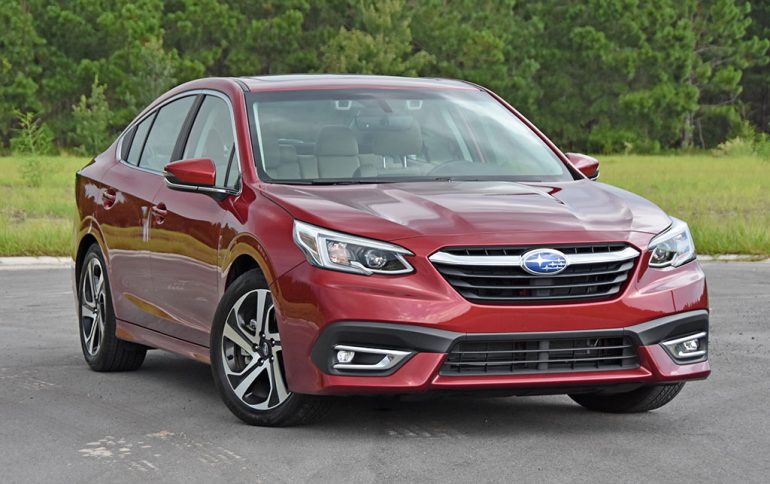 Subaru continues to be a go-to for trusted, reliable, safe, and value-added vehicles for the mainstream. In continuing such a tradition with the benefits of their expected all-wheel-drive system and forward-thinking active safety tech, Subaru redesigns their Legacy midsized sedan with a much better and more powerful engine choice for the 2020 model year.

The decision for Subaru offering a more powerful engine in the Legacy does wonders to literally boost its performance for a better run against its competition. For this week, I get my hands on the Legacy with the new engine in the Legacy Limited XT trim, one of six trim levels offered and one of two trim levels that offer a new 2.4-liter turbocharged 4-cylinder boxer (horizontally opposed) engine. The new turbocharged engine, which outdoes the standard and returning 2.5-liter naturally aspirated 4-cylinder boxer engine by leaps and bounds, gets 260 horsepower and 277 lb-ft of torque. The substantial power gain from the new turbocharged engine, which touts 78 more horsepower and 101 additional pound-feet of torque, is just what was needed for the Legacy for those who want a bit “more” from what is otherwise a well-built and inexpensive vehicle for its class. 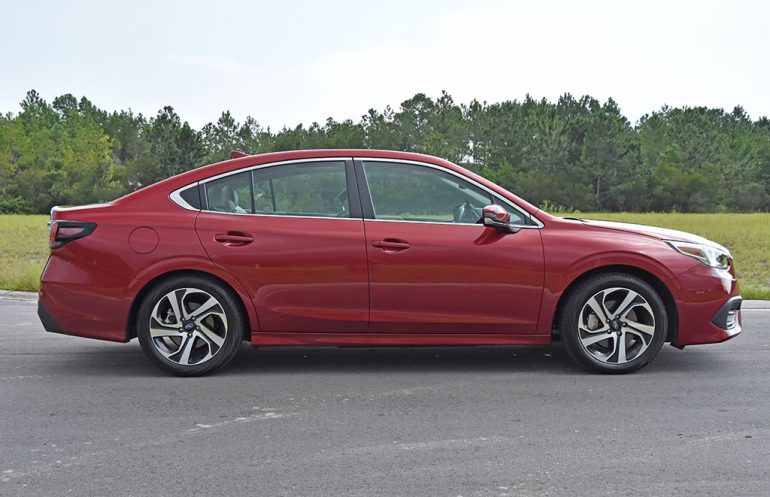 Having the new more powerful engine, the new Legacy is a whole two seconds faster to 60 mph than the naturally aspirated engine Legacy, taking just 6.1 seconds. Opting for the Legacy Limited XT or Touring XT trims adds the turbocharged engine as standard equipment mated to a CVT (Continuously Variable Transmission). In driving the new Legacy Limited XT, it moves with authority but is only hindered by a lumpy feeling from the CVT, which attempts to do too much to emulate a traditional automatic transmission. In its efforts to mimic a normal automatic transmission, the CVT is tuned in a strange way where its smoothness that I enjoyed in previous Subaru reviews is gone, unfortunately. While the engine is a wonderful engineering accomplishment for Subaru being mostly efficient and providing a substantial amount of power to send to all four wheels, it doesn’t do justice to pair with the engine – but instead it will exhibit choppy ratio step-downs and points where it holds the RPM with sudden harsh deceleration when you let off of the throttle. 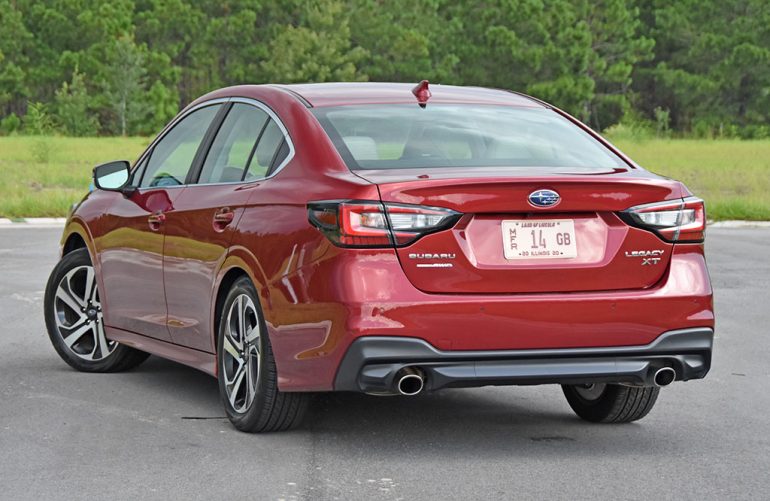 Apart from the disappointments with the CVT, the new Legacy Limited XT is a huge improvement over the outgoing model years with a more refined interior and an intriguing 11.6-inch tablet-style touchscreen infotainment unit. The new infotainment unit is another aspect where it seems Subaru may have tried a little too hard to garner attention but slightly fails with poor execution of such a system. Fundamentally, the large tablet-style infotainment system looks appealing at first glance but has a few faults, starting with its long initialization and boot time. Starting up the new Legacy and using the infotainment unit with its limited physical buttons prevents you from using any controls for almost a whole 25 seconds or more. Once the initial boot process has completed, which there is no sure way of knowing unless you annoyingly attempt to quickly adjust the climate control settings and nothing happens in Florida’s humid 95-degree weather, the system becomes quite responsive in most cases. However, there are many menu sets and primary functions that are buried under many unnecessary screens, such as the process to disable the annoying and unsettling auto start-stop feature – doing such takes three button presses before you can disable the feature. Disabling auto start-stop on the Legacy Limited XT is a MUST, because the whole vehicle shakes when the vehicle shuts off at a stop and does even worse when restarting. Other features of the large touchscreen also have a mixed feeling where I second-guessed myself many times in an attempt to enter vehicle settings or switch to the small and condensed display of Apple CarPlay, which I hear there is an update to expand the display of such where it is otherwise miniaturized on the large screen and not friendly for someone with fat fingers. 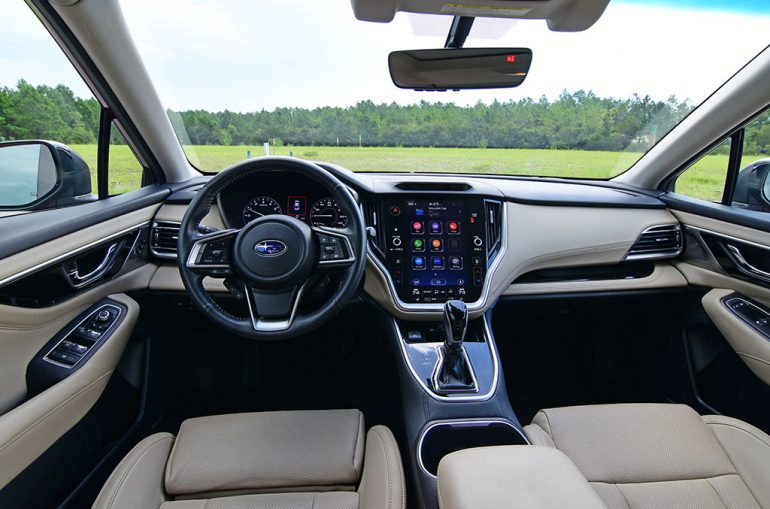 Where the new 2020 Legacy appeals to mainstream sedan buyers is its interior space, advanced safety, standard all-wheel-drive, newfound performance in the new turbocharged engine, and exceptional value. On the side of safety, Subaru is creeping ahead of the rest with their latest EyeSight system and new segment-first DriverFocus Distraction Mitigation System, which can identify signs of driver fatigue or when the driver is not paying attention to the road ahead. Through clever sensors mounted atop the infotainment screen, the DriverFocus system can monitor the driver’s eye sight and display an alert along with an audible alarm when it detects the driver’s eyes taken off of the road. The system will first prompt a new driver to create a profile so it can properly monitor the eyesight of someone dependent on their seating position. It works well as I tested it a few times with the help of a passenger on a closed road. Moreover, the latest EyeSight system constantly monitors the road closely for obstacles or impending collisions and properly displays a heads-up visual alert. 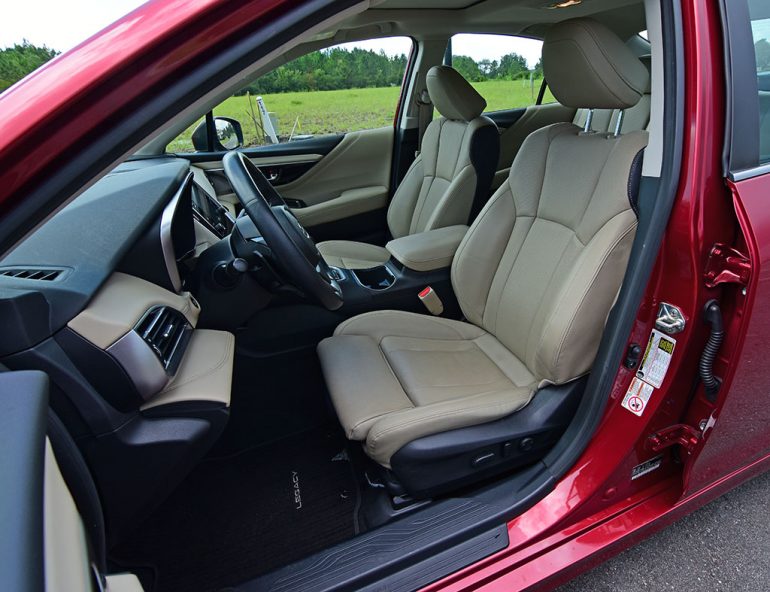 The interior of the new Legacy is up-classed slightly and has a nice appeal in the Legacy Limited XT trim of my test vehicle. There’s a wise use of space throughout with a surprising amount of space in the back seats. Ride quality is good and improved to limit unwanted body roll and bounce when going over heavy road undulations. Fuel economy is rather consistent and real-world driving matches that of the EPA-estimates of 24 mpg city, 32 mpg highway, and 27 mpg combined. 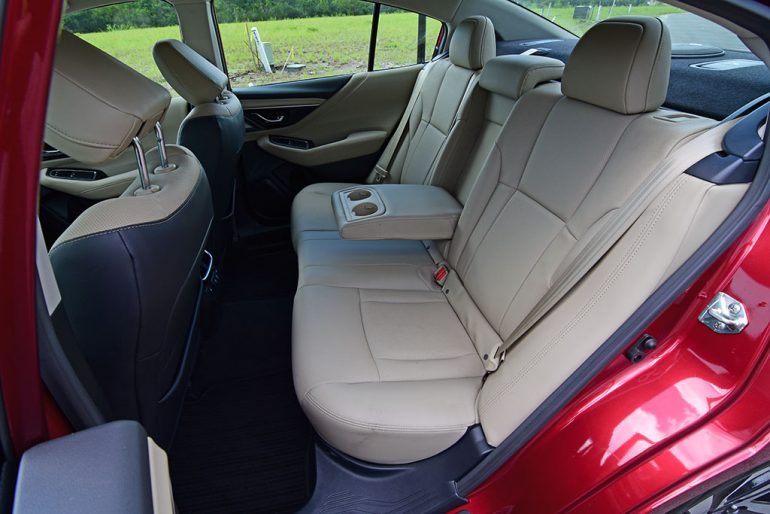 The make-up of Subaru has been pushed forward with the new 2020 Legacy, and having the new turbocharged engine offering broadens its appeal to a wider demographic. With the as-tested price for my new Legacy Limited XT test vehicle at $35,095, there’s a lot of value to be had when comparing it to most of its competition when you opt for the top-level engine choice. Also, with the Legacy starting at a price of just $22,745, there’s a good value proposition at the base level, even with the efficient and less-powerful standard 4-cylinder boxer engine.