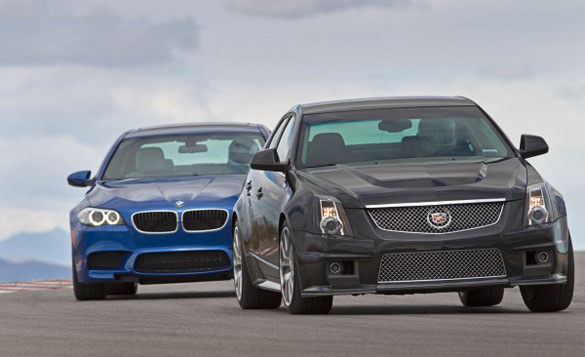 In one view, the new BMW M5 is the epitome of German automotive engineering at its best when it comes to a performance sedan. On the other end of the world, the Cadillac CTS-V is America’s pride and joy wrapped up in 4-doors. For years, these two champions have rivaled each other giving enthusiasts a serious dilemma and compelling argument as to which one they would ultimately choose to take home.

Automotive magazines make a creditable attempt to compare the two rivals, but does that really sway ones opinion of an American or German bred sports sedan? Road & Track, in the video posted below, attempts to make the case seem rather persuasive for some aside from the track numbers. In the test, we give major kudos to Road & Track for pitting the new BMW M5 manual transmission against the Cadillac CTS-V manual. In my opinion, that is the only way to go when comparing these two 4-door monsters against each other. If you ask me, I would take home either vehicle in a heartbeat even if one is a second or so faster around a track. Now which one would you choose and why? Leave your comment below!