Honda Shows You How To Build A World Challenge Race Car: Video 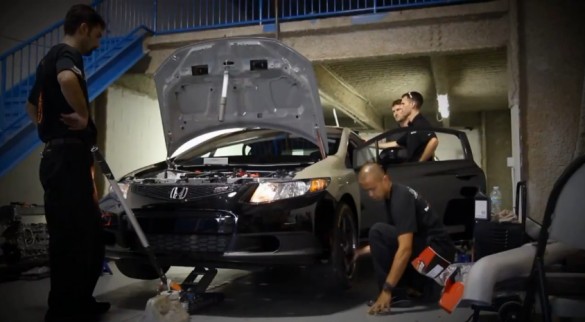 Let’s get this out of the way up front: while we were huge fans of the last generation Honda Civic Si, we simply can’t warm up to the latest generation, now fitted with the 2.4-liter four from the Acura TSX. While we’re sure the new generation will prove to be plenty reliable, there was a magic in the previous generation car that’s simply lacking in the new one. The 2.0-liter Civic Si simply begged to be driven hard, while the new car just seems to put up with it. We always hated giving the keys back on earlier Si models, but frankly we couldn’t wait to get the new version out of our driveway.

Honda’s heard the complaints, and we sincerely hope they’re addressing the new Si’s shortcomings. In the mean time, Honda wants to remind you that it still races cars, including the Civic Si, in series like the SCCA’s World Challenge. Building a race car for Touring Class competition is fairly straightforward, since rule books specify needed safety features and allowed modifications to engine, suspension and brakes. Disassemble the car, weld in a cage, bolt the needed pieces back together and you’re good to go.

While the message the video tries to deliver is “the Honda Civic Si you can buy at a dealer is nearly the same as the Civic Si we race,” nothing could be further from the truth. Perhaps if we drove a Civic Si with a Honda Performance Development race engine, suspension and brakes, we’d feel differently, but we haven’t had that opportunity.

If you’re in the market for a Civic Si, take our advice: find the cleanest used 2011 to 2006 you can. It will put a smile on your face every time you get behind the wheel, which is something we can’t say for the current car.