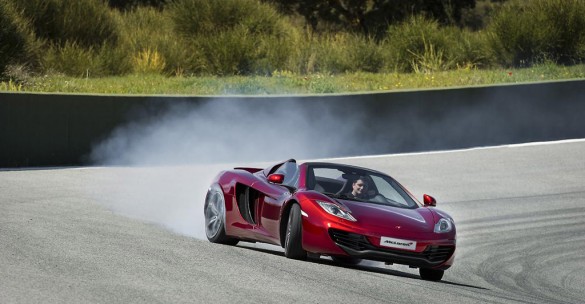 McLaren has not only officially released images and information on the new MP4-12C Spider, but a new promotional video of the hot drop-top taking to the track has been unleashed.

The new McLaren MP4-12C Spider promo video footage looks like it came straight out of a new move flick featuring CGI and special effects. In reality, the footage is real, filmed with cinema-quality RED cameras while on the track and in the mountain roads of Spain.

The new McLaren MP4-12C Spider features a hardtop retractable roof, capable of fully opening in 17 seconds. The MP4-12C 3.8-liter twin-turbo V8 is used in the Spider to produce 616 horsepower directed to the rear wheels through a 7-speed dual-clutch transmission. 0-60 mph acceleration for the MP4-12C Spider can be accomplished in 3.1 seconds.

NEW 12C SPIDER: ON THE LIMIT AND ON CAMERA IN NEW SHORT FILM BY McLAREN AUTOMOTIVE

The stunning new 12C Spider may now be seen in action for the first time, with the launch of high quality short film at McLaren Automotive’s popular official You Tube channel: www.youtube.com/mclarenautomotivetv

Shot using cinema-quality RED camera technology, the film begins with a 12C Spider finished in glorious Volcano Red in high speed action on track, before it traverses the winding mountain roads of Andalucía in Southern Spain. The exciting sequence underlines the 12C Spider’s position as a luxury convertible sports car offering a spectacular combination of performance and usability.

Early in the film, the 12C Spider’s Retractable Hard Top is lowered with the car in motion – a unique feature among the new 12C derivative’s competitor set. The RHT system operates in less than 17 seconds. McLaren Automotive Test Driver and British Touring Car Championship star Mat Jackson then shows viewers why McLaren believes it has developed a sports car that adds ‘open-top thrills’ to a groundbreaking package of technology inspired by its successful Formula 1 race cars.

Antony Sheriff, McLaren Automotive Managing Director said: “We know 12C drivers love the Formula 1 technology DNA that runs throughout their cars. With the 12C Spider, owners will have an even greater opportunity to create their perfect driving experience. Top up or top down, the sports car with highest performance among the competition just became even more breathtaking. The exhilarating aspects of driving the 12C Spider are captured beautifully in this great new film.”

Prospective customers and sports car enthusiasts may now specify their desired 12C spider at McLaren Automotive’s interactive online configurator, which is located at: www.configure.mclaren.com. There, the 12C Spider may be personalised with myriad exterior and interior finishes, a range of wheel designs and attractive carbon fibre appliqué.

Orders for the new 12C Spider are now being taken by 38 McLaren retailers in 22 countries worldwide.