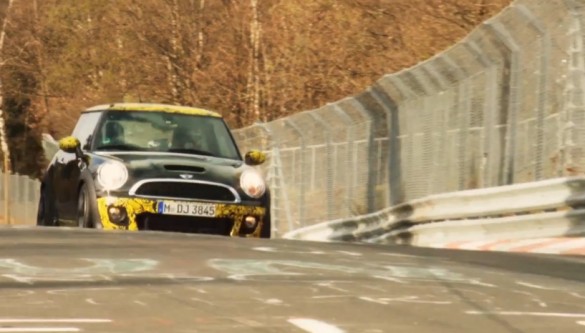 MINI’s first John Cooper Works GP was a special edition launched to more or less commemorate the end of the revival’s first generation. Available in (very) limited quantities only in 2006, the JCW GP got more of everything that makes a MINI Cooper special. First, it got bumped up to 218 horsepower, got bigger brakes, got additional chassis bracing and was fitted with a stiffer, adjustable suspension. Next, it went on a diet, losing sound deadening and its back seat in the name of weight savings. It got special paint and graphics, too, further separating it from the rest of the product line.

That car was fast enough to lap Germany’s Nürburgring Nordschleife in 8:42, which made it 10 seconds faster around the Green Hell than a MINI Cooper S. For 2013, MINI is reviving the JCW GP, and it promises to be even more impressive than the original. How much more impressive? Try 19 seconds quicker around the ‘Ring than the 2006 version, giving it a time of 8:23. If you’re keeping score at home, that makes the upcoming MINI JCW GP faster than a 2009 Ford Focus RS and just one second slower than an E46 BMW M3.

MINI hasn’t released horsepower numbers for the new car just yet, but we know it will follow the same formula as the first JCW GP. Expect a stiffer (and fully adjustable) suspension, extreme-performance summer-only tires, uprated brakes, a stiffer chassis and serious weight reduction. Like the original, it will come wearing a unique paint and graphics package, complete with an aero body kit. Pricing hasn’t been set, and we have no idea how many will be imported into the United States, but if you want one, now is the time to start talking to your local MINI dealer.