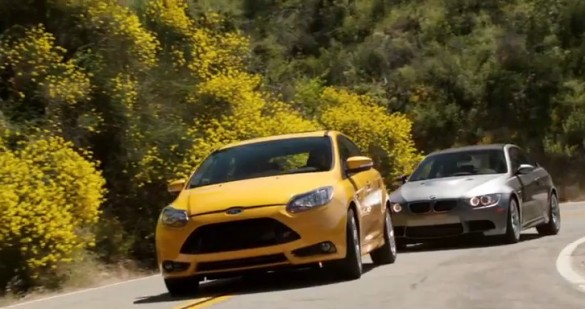 Ford wants hot hatch shoppers to know it’s serious about dominating the segment with its new Focus ST, so it’s kicking off a series of videos called the “Focus ST Sessions,” targeted squarely at the Millennial demographic. In the first video, we see a twenty-something woman enjoying her Focus ST up a (closed) canyon road, in the company of a Mazdaspeed3, a Subaru WRX and a BMW M3.

And that’s where the video goes from good to bad. We’ll overlook the whole “ignoring the road closed signs” thing, and focus (no pun intended) on the driving shown in the video. It’s chock full of double-yellow-line passes on winding mountain roads, sans guard rail, along with inside, mid-corner passing. Sure, it’s safe in the video, but the drivers used aren’t amateurs, and the road was undoubtedly run numerous times before filming commenced. In the real world, you need to worry about things like rock slides, road debris, animals, joggers, bicyclists, other drivers and a hundred other things not considered here.

We’re not sure how this video slipped past Ford’s legal department, but we’re equally sure of this: when the first teen driver stacks his Focus ST off a mountain road, his parents will present this video as evidence in a lawsuit against Ford. Sadly, these are the times we live in.

We get the purpose of the video, which is to show that the Focus ST “beats” the Mazdaspeed3 and WRX on features, while “losing” to the much more expensive BMW M3. The actual performance of any of the cars shown never comes into play, which is yet another strike against the video. If the Focus ST really does out-perform the others, why not show it doing so on a racetrack?

If Ford had opted to film this on a track, we’d have no issue with it. On public roads, even those closed for filming, we just can’t let it slide without taking note.