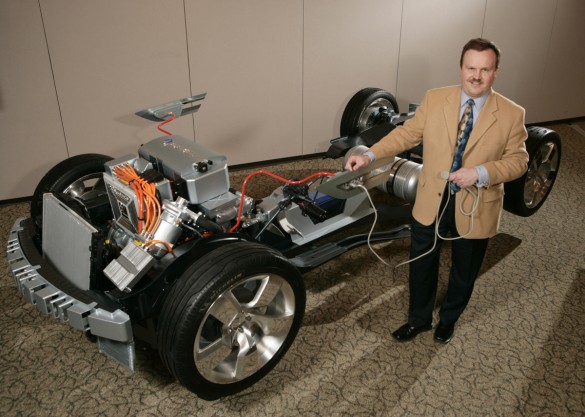 Last February, Fisker Automotive appointed former Chrysler boss Tom LaSorda as its new CEO. The move was considered a positive sign by many, as LaSorda is a well respected automotive industry professional with all the contacts that a young automaker like Fisker needs to grow to the next level.

Now comes word from Green Car Reports that LaSorda’s days at the helm of Fisker will soon be coming to a close. On Tuesday, Fisker announced the appointment of former GM executive Tony Posawatz as its new CEO, a move that caught many in the industry by surprise. As the former head of the Chevy Volt program, Posawatz brings a unique and highly specialized background with him. In fact, he’s probably the only auto industry executive (aside from Henrik Fisker) with experience in developing, building and marketing a range-extended electric vehicle.

Like the Chevy Volt, the Fisker Karma is an electric car. When the batteries are depleted in either model, a gasoline-fueled engine powers a generator, supplying the needed electricity to the motors and battery. Unlike conventional electric cars, which have only a limited range and then require a long recharge cycle, the Volt and Karma can be driven as long as there’s gas in the tank (or charge in the batteries).

LaSorda, who will be leaving Fisker, reportedly was positive about Posawatz’s hiring. This much is clear: Fisker is an automaker that’s struggling to survive, faced with challenges like insufficient funding and a series of mysterious (and unexplained) vehicle fires. Perhaps LaSorda knew he wasn’t the man to right the ship, but the question remains: can Posawatz move the company forward?